Toyota will get the CHR SUV in India. This SUV has been spied testing in India by us. Toyota does not have an SUV in India which is cheap and an alternate to the Hyundai Creta or new entrants Mahindra XUV500.  This will be the Toyota CHR India. Toyota is also getting a sub-four meter SUV in the form of the Toyota Vitara Brezza. Recently, Toyota has got into an alliance with Maruti Suzuki. The two companies will help each other using their strengths. The CHR is just going to help Toyota widen it’s SUV line up in India. Instead of Rush, Toyota could be getting the Ertiga from Maruti to full-fill the 7 seater gap.

Toyota does not want to be known only for the Fortuner and Innova but as a brand that many in lower-income groups also aspire to own. Scroll down to check out the latest spy shot of the car. 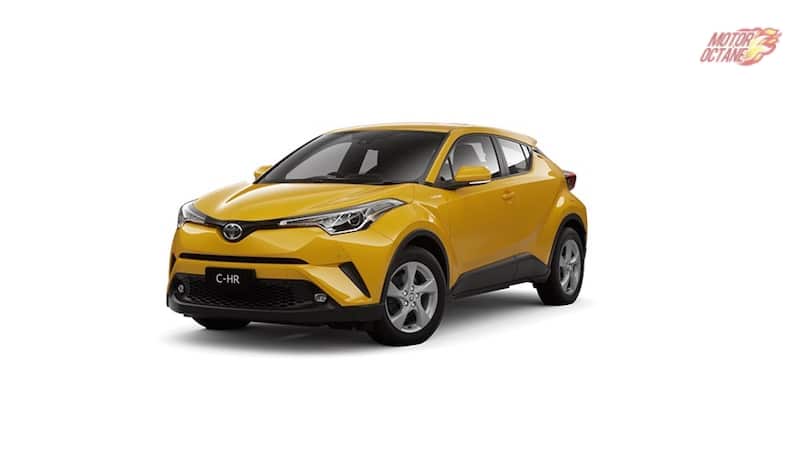 Toyota CHR What is it?

Toyota already dominates the premium SUV segment with the Fortuner and the MUV segment with the Innova Crysta. Now it will look to exceed itself and make its presence in the smaller SUV segment as well. The spy pics do suggest that the launch of this SUV will take place, sometime next year. A new platform will underpin this SUV and it will also be localized. This new platform will spawn other new vehicles as well. The Toyota CHR India will also get a hybrid version. Below is an image of the car we spied recently. Toyota sells the CHR in the UK, Australia and even Europe. The main rivals for this new SUV will be Hyundai Creta and the Renault Captur. Currently, the Creta is ruling this segment. This will not be a sub-four-meter SUV, and the length will be about 4.2 meters. Design of the CHR is its strongest point and it is quite radical. Read further to know more about the Toyota CHR.

The Toyota CHR India is expected to arrive in India by late 2019. The company has not confirmed anything about this yet. Toyota is currently working towards the localization of the CH-R as they want it to be competitively priced. This SUV shall be built on a new platform and the company will spawn more vehicle on this platform. It will be an interesting SUV. The car has already been spotted testing.

It is kind of early to predict the exact pricing of the new CH-R. However, expect this SUV to be somewhere in the range of Rs 12 lakhs to Rs 18 lakhs. It will coincide with the new 2018 Hyundai Creta. Buyers will have another option to consider is this segment. There will be more competition in this segment. It will also be a worthy option to consider over the Jeep Compass.

The Toyota CHR India has an amazing road presence. This is why SUVs are popular and Toyota will provide buyers that butchy look. The design of the CHR pushes the boundaries ahead for the Toyota design language. This is a clear statement that the company won’t be looking at making dull and boring looking cars anymore. Toyota had built an image of not being a design focus, but this will change with the CH-R. The design looks fresh and hip and this should attract a lot of buyers. It isn’t exactly macho but has a lot of curves to make it look appealing and contemporary. The design of the Toyota CHR is more like a crossover than an SUV and has been built on Toyota’s new global architecture, which it even shares with the Prius.

This helps to reduce the engine mounting height thus improving the driving characteristics. The design is funky and it should be a hit amongst the millennials. The tail lamps are a bit boomerang-like. The bumpers are blacked out and look bold. There is a large rear spoiler as well. The Toyota CHR that was showcased at the Motor Show was a two-door concept. In reality, it is a five-door version. The alloy wheels will also bee attractive ones in a diamond-cut finish.

The interiors of the CH-R are simpler and not as flashy as the exterior of the vehicle. But the style quotient is high. There are no cluttered buttons, it a neat flowing design of the instrument panel. The new Toyota CHR has a slot for a touchscreen system on the center console. Followed by AC vents and dual-zone climate control. There are new twin-dial instrument cluster and a new three-spoke steering wheel as well. The design is appealing and yet simple to operate. The infotainment system gets an 8-inch touchscreen with Android Auto and Apple CarPlay. The car will get a cool leather upholstery with soft-touch material added to the dashboard and doors. There is a lot of storage spaces in the car. The rear seats get a 60:40 split too.

The CH-R is a five-seater SUV and this will have two rows of seating. We reckon the space on offer should be good enough. The boot too should have sufficient space to gobble luggage for a weekend trip. The rear seats look spacious, and even six-footers can sit in the front and at the back. The rear does seem a bit claustrophobic.

The Toyota CH-R is expected to come with a 1.8-litre petrol hybrid engine. Expected to produce about 122 bhp of power. This will be coming with a six-speed manual and even a 7-step CVT automatic transmission. Toyota has been working on new engines, both petrol and diesel and this is not just for the CHR but other upcoming models too. Recently, the Yaris was unveiled in India and it got a CVT transmission in all variants. The same will be applied to the CH-R as well.

The Toyota CH-R in India will most likely get the 1.4-litre diesel mill, but with more power on tap. As this segment has been growing we expect Toyota to spice it up further. It is yet to be seen whether the same engine will be retained. If it does, it shall be offering more power, up to 100bhp as the competition today offers between 85bhp to 125bhp on diesel engines with five and six-speed manual and automatic transmissions as options. So, Toyota will have to offer a more powerful diesel engine to match up with its own petrol engine. An AWD might also be offered on this vehicle later.

Globally the Toyota CHR is available with a 2.0-litre engine with more power and a hybrid system as well. We do not think India will get this combination.

The car will be one of the safest cars in its class. The Toyota CHR will come with 10 airbags as standard with Blind Spot Monitoring and Rear Cross-Traffic Alert. Safety features like these make driving more safer and simpler for everyday life. The car will get a backup camera with reversing aid. Features like Pedestrian Collison and Dynamic Cruise Control.

The Toyota CHR India will be competing with the Hyundai Creta, Maruti S-Cross, Renault Duster and the Nissan Terrano. This will be the compact SUV, just bigger than four metres in length.