Peugeot is a French brand that sells vehicles worldwide. Many car manufacturers such as MG and KIA have recently entered India and Peugeot also plans to do the same. The Peugeot 208 has been spotted testing in India but the car to be launched from the PSA brand in India will be the Citroen C5 Aircross. The C5 Aircross has been spied several times previously. It makes sense due to the SUV demand in India. Citroen will be introduced through the PSA brand which owns Peugeot, Citroën, DS, Opel and Vauxhall brands. As we have seen the Citron showroom being set up at Gujarat we can expect a Peugeot 208 India to be sold there. Check out more details about the Peugeot 208 India below.

The Peugeot 208 is a hatchback that is sold in Europe. PSA has long had plans to enter into the Indian market. It will enter with the Citroen brand as the Citroen line up has the most suitable vehicles in India. It will plan to focus on maximise localisation for the cars as can be seen in the different panels on the Peugeot 208 that has been spotted. The company will enter the market with the C5 Air cross which is a raised crossover and therefore it will focus on building a premium brand rather than go for the volume sellers right now. It plans to launch a new car every year from 2021 and will also develop new platforms that will be India specific. 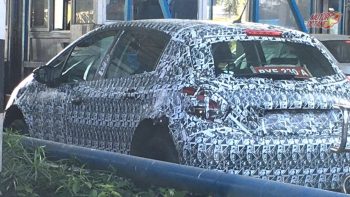 PSA had previously entered into an agreement in 2017 with the Birla group over the production of cars in Chennai. The PSA brand could also introduce the Peugeot brand soon with the 208 competing against premium hatchbacks such as the Elite i20 and Maruti Baleno. The car spotted here is the previous generation model while and it has gotten a lot of updates in the new model. It has also won the car of the year for 2020. The new car gets a lot of changes in it. Previously the Peugeot 208 was also spotted with different body panels which suggests that the manufacturer is localising many of its parts here. Peugeot could bring in the older car with the platform designed specifically for India. This car, as well as the upcoming cars, will be based on the new modular platform that has been tweaked especially for India. It has a manufacturing facility at Thiruvallur and will be able to produce 1,00,000 units in the first phase. It plans to have more than 90% of its parts to be localised to keep the costs low. Citroen has also established dealerships in Ahmedabad. An investment of more than 100 million Euros has been earmarked for the initial stages.