The new Maruti Alto 2018 has begun testing in India. Maruti Suzuki will not want to waste any time and get the new generation to India. The new Alto 2018 will be bigger, spacious, powerful, fuel efficient and a lot more feature loaded too. We share our detailed information on the new Alto 2018. Maruti is working on a new project called Y1K, this will make the new Alto look like a crossover.

Maruti Alto or the 800 has generally had a product lifecycle of about 10 years in Indian car market, but this time its about five years as the new crash norms and emission norms are being implemented. The new Alto will be a lot lighter than the current-generation by at least 60 kilograms, which is about 10 percent reduction. “The new Alto will pass all the crash tests and will be safer too. The Alto has more than 45 percent of high tensile steel that makes it stronger and lighter,” mentioned one of our sources.

There won’t a radically different design, but it will be built on an all new platform. The strong points of the Alto will be retained on this new generation as well. Maruti Suzuki has invested about $1 billion as they will be launching 15 new products by 2020. These will be based on three platforms. The new platforms will meet the crash norms and even

The new-generation Maruti Alto will be launched in 2017 and will be the most fuel-efficient car in its segment. The new-generation Alto will be based on the Alto Kei platform, but it will be redesigned to suit the requirement of the Indian audience. The Alto 800 and the new K10 were also designed for the Indian car market in specific. This is being done as the 2017 new crash norms will be implemented and this new Alto will pass those tests. Expect the new Alto to get higher ground clearance than the current one. The spy shots suggest it looks similar to the Ignis and even the Alto Kei at the rear.

The new-generation Alto will have simple interiors, however it is likely to get some retro styling elements from the Alto Kei. The image below is of the Alto Kei, which has been launched in Japan. It will follow a similar design language with a simple set of controls, large dial in the instrument binnacle and a three-spoke steering wheel. In Japan, the Alto Kei is offered with an automatic, however India will get an AMT. We could also get the gear lever on the centre console. The music system could now be a touchscreen system as even the Kwid is offering it. There will be front power windows on the new Alto. 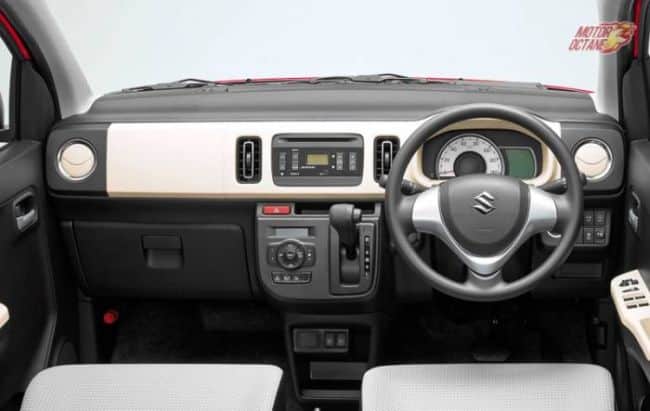 The interior styling will also have the retro bit too. The new Alto will have good space and it will come with a lot more customisation options. The Alto will a lot more features too. Expect a touchscreen system with maps and even bluetooth connectivity.

The new-generation Alto will be lighter, faster and a lot more fuel-efficient too than the existing Alto. The new-generation Alto will get a new 658cc engine that will come in two states one producing about 53bhp and the turbo version will produce about 62bhp. These will be implemented for the emission norms and even better fuel efficiency. The Alto will have ARAI fuel efficiency in excess of 32km/l. So, the Alto K10 engine will be replaced by the turbo engine and the regular 796cc by 658cc. There will be an AMT (automated manual transmission) as well. This is where majority of the testing will happen.

The Alto will be powered by a 658cc engine (codenamed as R06A) could come in two states of tune, one will be with turbo and other without. On the new Alto, the 658cc will produce about 53bhp and the turbo version will produce about 62bhp. There will also a VVT (variable valve timing) version of this engine. So, the Alto K10 engine will be replaced by the turbo engine and the regular 796cc by 658cc. These will be implemented for the emission norms and even better fuel efficiency.

Also Read: Datsun’s answer to Alto, Price and Specifications of the new hatch

Also Read: Hyundai Santro coming back. We have the details Hyundai Grand i10 offered with discounts

Book your Tata Tiago through us