The all-new Honda Amaze 2018 has been recently launched at ₹5.59 lakhs (ex-showroom, all India). The price of the car is pretty close to the Maruti Dzire, the best selling compact sedan. The 2018 Auto Expo had seen the unveil of the new Amaze and it was one of the major attractions. The Amaze comes with some first in segment features and also sets new benchmarks for the industry as a whole. This compact sedan gets a CVT option, that too in a diesel version. Never before have we seen a CVT being offered in a diesel car. Honda has been a pioneer in technology. The i-Vtec and i-Dtec are examples of that. Honda has built itself into a strong brand because of this.

The Amaze 2018 will be Honda’s most important product for this year and also will be the strongest competitor to the Maruti Dzire. Apart from the Dzire, this compact sedan will offer an automatic in both petrol and diesel. CVT is supposed to be a better gearbox as compared to AMT in terms of driving pleasure. The new Amaze will will be a challenger to the Dzire. The Honda Amaze 2018 has undergone a complete change, same as the Dzire. Honda aims at getting the Amaze back as a forerunner in this segment.

The New Honda Amaze adds some more glamour to the compact sedan segment. The CVT options in petrol and diesel are a boon, especially to metro city dwellers. These set of users drive daily in heavy traffic conditions and also have their weekends reserved for intercity leisure travel with families. The Amaze aims at targeting this set of buyers. Though SUVs have gained prominence lately, compact sedans are evolving a lot. The New Maruti Dzire is a prime example of that. Now the Honda Amaze 2018 will take the game even further .

The same 1.2-litre petrol and 1.5-litre diesel engine do duty on the Honda Amaze 2018.  Apart from a CVT, it will gets cruise control. This is not just a facelift, but an entirely new generation model. Almost everything has changed in the car, barring the engines. The Honda Amaze has entered production and will be launched in May 2018.The Honda Amaze 2018 offers a good combination of space, performance, practicality and fuel efficiency. The Auto Expo 2018 saw the global unveil of the Amaze 2018. This compact sedan is build on a new platform. The car is now wider and stronger as well. The Honda Amaze next generation is spacious, owing to this. It looks much more premium than its predecessor. Read further to know more about the new Honda Amaze.

This is a feature loaded compact sedan. The new Amaze is fitted with a touchscreen audio system, with navigation and reverse camera on the high end versions. It also gets have steering mounted controls and a more advanced driver information display. The Amaze 2018 also gets a push button start, which is a much desired feature in cars these days. In terms of safety the 2018 Honda Amaze has dual airbags and ABS as standard, across all variants. It also has cruise control.

The interior is all new in the 2018 Honda Amaze. This is the most important change, as the Amaze was known to have drab looking interiors. The overall look is more premium and also have a pleasing look. There is a dual tone colour theme. The dashboard, instrument panel is all new and has an elaborate driver information system. The centre console features an audio system with bluetooth and aux-in and USB ports. The high end variants will get a new touchscreen system. Higher variants will also get Android Auto and Apple CarPlay. A new steering wheel will feature in this car which will also be shared with the 2018 Brio. The steering wheel will has audio and bluetooth controls mounted on it. Space has always been the highlight of the Amaze and it continues to be so on the 2018 Honda Amaze. It offers class leading space both at the front and on the rear seats. The seats are also all new and much better than earlier. They now are better bolstered and have an adjustable head restraint. It looks and feel more upmarket than the earlier model. It feels better than competition.

The new Honda Amaze 2018 CVT will meet the new crash test norms and hence is expected to be stronger in build than the existing model.The 2018 Honda Amaze gets dual airbags and ABS as a standard feature across all variants. It also gets reverse parking sensors and speed limit alerts on all variants.

The 2018 Honda Amaze starts at 5.59 lakhs and goes upto 8.67 lakhs, for the top end diesel variant. The car is priced very close to the Maruti Dzire.  The New Honda Amaze will offers good value, with more equipment than the outgoing one. It will compete fiercely with the Maruti Dzire. The higher end variants do not get a CVT, hence the price walk is shorter than the Dzire.

The Honda Amaze 2018 is built on a new platform. This platform has higher rigidity and also is better in terms of safety. It will meet the new upcoming safety and crash test norms. The styling of the 2018 Honda Amaze is all-new and contemporary. A new front grille dominates it. It has a thick chrome band on it. The car is more appealing because of its sharper looks. The front has a smiling face, which looks pleasant and bold at the same time. There are sleeker headlamps as compared to the earlier car and also features LED DRLs which are embedded within the headlamps. The bumpers are also new. 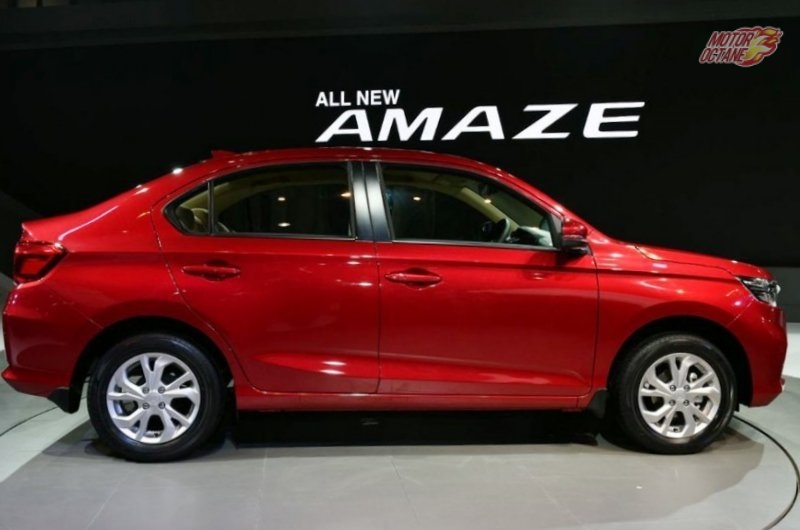 The new fog lamps are integrated in the all new bumper. The bumper gets a more chiseled look. The turn indicators are present on the ORVMs too. There is a new shoulder line that adds a lot of character to the car. The rear portion also is all new. There are new taillamps that compliment the headlamps and look premium as well with the two piece design. The 2018 model gets new alloy wheels. The higher variants will get alloy wheels and the lower variants will get steel wheels with new design wheels covers.

The New Amaze will come in 5 colour options.

The Honda Amaze 2018 is a sub 4-metre sedan. Dimensionally nothing much has changed. It will be more or less identical to the outgoing model. This is a good thing as the Amaze offers very good interior space, though being compact from the outside.

The same engines offered currently will do duty in the new Honda Amaze 2018 . One is the 1.2 litre, four cylinder, SOHC engine that produces 87bhp of power at 6000rpm and 109Nm to torque at 4500 rpm. The second engine will be a 1.5-litre diesel engine with 98bhp of power at 3600rpm and 200Nm of torque at 1750rpm. The engine will however be tweaked to offer better fuel efficiency and also be low on emissions. These engines will come mated to a five-speed manual transmission. There will also be an option of a CVT. The CVT will be offered on both petrol and diesel versions. This will change the entire game, which was favouring only the Maruti Dzire, as no other compact sedan was offering a diesel automatic.

This is one of the high points of the Amaze. It offers very good boot space for a compact sedan. The new Honda Amaze will also offer good boot space of 400 litres. This is enough for a family luggage for a weekend or more.

The ground clearance of the Honda Amaze has not changed much. It is about 165mm, as per new ARAI standards. This is identical to the earlier model. The Amaze has good ground clearance which is good enough to tackle our road conditions.