The Renault Kwid 2019 has been spotted testing. We had revealed earlier that Renault will be launching a facelift of the Kwid in 2019. The Kwid has been an exciting car. When first launched, it took the market by storm and challenged the segment leader, Maruti Alto. It was attractive looking and also had good road presence. This was enough to roll eyeballs in its favor. Space and features it offered was unparalleled in its segment. This made it a big hit in the country. Now as the car completes three years it is bound to get a major facelift.

Due to competition getting aggressive, The Renault Kwid sales have crossed the 3 Lakh Mark. The Renault Kwid has crossed this milestone in a period of little over three years since the hatchback was launched in 2015 and turned out to be a game changer for the company. It will get some upgrades that will make it more attractive. There will not be an major change to its design since it’s launch in 2016.

However, it will get styling updates. There will be new bumpers in place. The headlamps will see a tweak. A new front grille will also be added. The interiors will also get an upgrade in terms of color theme and touch and feel. An upgraded touchscreen system might come in. There will be no change in its engines. It will continue to be offered in the 800cc and 1.0-litre engine options, with a 5-speed gearbox and AMT.

There won’t be a major change in the pricing of the updated Kwid. Renault will be very careful with pricing the Kwid. The car needs to be very competitive to maintain its sales numbers. Expect a slight increase, that too in higher variants. This is due to the fact that they will get some more features.

The Renault Kwid 2019 will be launched by mid-2019. This will not be a major facelift but will get some new elements. There will new bumpers. More features will come too. In terms of looks, it will be the same as the current model. The engine options will also be the same where there will be no change here. These engines are fuel efficient and decently powerful and the AMT will be offered as a knob shift. The reader who has sent us the pictures of the updated model has said that the AMT option will get the much-needed creep function.

The interiors of the Renault Kwid 2019 will look better. Though the basic design will be the same and the dashboard as well, it will get a new interior theme. The interiors will be spacious and will have better touch and feel to it. The touchscreen system will be updated as well and this touch screen Bluetooth and navigation will get an update too. The fully digital instrument cluster will continue to be offered and it looks good. Its dashboard is the best looking one in its segment. This time the car might get internally adjustable mirrors as well with A day/night IRVM. The spy pictures do not reveal these features, but we are hoping for them to come. The Renault Kwid 2019 will offer ample headroom and knee room in both the rows. There will be plenty of storage spaces. The side door pockets of the current Kwid can easily accommodate more than three 1-liter water bottles. This really makes the Kwid stand out. The Renault Kwid 2019 will still be a very practical car. This hatchback has a boot space of 300 liters, which is much bigger than its competition. Another thing that we will see and that is shared by our reader is that the car will receive a rear charging socket. Another thing that will be part of the pre-facelift update will be the addition of the rear armrest according to our reader and the inside door handles will be chrome. Check out the below picture to see the chrome handles. The Renault Kwid 2019 will continue to have butch looks. It is the SUV looks that made it famous. The Kwid looks tough and that is its USP. It will also get the same high ground clearance and the Renault Kwid 2019 will have sleeker styling. The headlamps and front grille will be sleek in design and will add to the look.The Renault Kwid 2019 facelift will be launched this year. But in the meantime, the car has received minor updates with some new features. These features will be standard in the upcoming facelift. These are a bunch of safety features that will make the car safer now. These features will be available since January now. Safety features that will come standard now are –

Now one thing that will come in the pre-facelift update on the Kwid is that if you see the pictures shared by our reader you will notice that the only change that is visible to the eye is the new front grille design. The front grille which is chrome plated is now of a different design. The current car has a honeycomb design while this new design is a more basic horizontal slat design and on the current car, there was an option of a bigger chrome grille. But the new car offers a completely different grille that is brand new.

There have been no changes to the cars tyre size, the plastic body cladding, rear view mirrors whereas the only extra feature one can see is on the rear, which is the reverse parking camera which is integrated into the Renault badge on the boot lid. The grille and the reverse parking options are a major update before the facelift Renault Kwid 2019 is here. Renault Kwid 2019 will be a competitive car in its segment. The Kwid was developed for India specifically and it also caters to other developing markets. The Kwid looks more rugged due to the body cladding. The Renault Kwid 2019 will have a different appearance due to the changes in the front grille and headlamps. From the side, it will look identical. The high ground clearance will be there. The tyres wool also be the same as they deliver good fuel efficiency. It will get blacked out door pillars and also door handles. The rear of the Renault Kwid 2019 is also will not see much change. The Renault Kwid 2019 will be more pleasurable to drive. The three-cylinder units are smooth and have adequate power which produced a decent low-end torque and the car pulls off smoothly. One doesn’t need frequent gearshifts while driving in the city and the Kwid 2019 will continue to offer the same engines.

These will be attached to a 5-speed transmission which the AMT will again be offered only with the 1.0-liter engine. Also according to our reader, the pre-facelift update for the Renault Kwid 2019 gets a major update in the form of the creep function on the AMT gearbox. This will be a boon for many drivers and will make driving on inclines and regular traffic very easy.

This has been one of the best features of the Kwid. The Renault Kwid 2019 will again impress with its ride and handling making Renault one of the best in this department. The steering is light and well-weighted. All round visibility also is very good in the car. It also will have good rear seat comfort for a car of its class.

The Kwid 2019 will be a fuel-efficient car. Both 800 and 1.0 will offer a good mileage. These figures are claimed ones however, in real driving conditions they tend to be 10-15 percent lower. 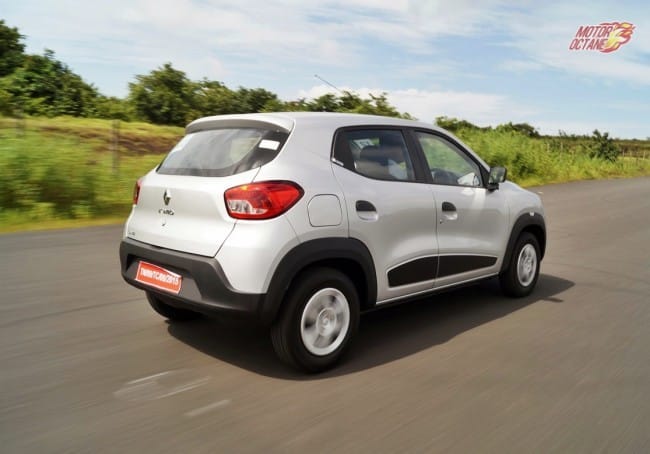 The Kwid 2019 will rival the new Maruti Alto 800, new Hyundai Eon and the Datsun RediGo. There will be a tough fight between these cars as the others too will see some upgrades in the future.

RxT: This variant has front fog lamps, touchscreen system with navigation, an onboard trip computer, front power windows and the optional package of driver airbag.