Mahindra is one of the best selling car manufacturers present in India. They have been ruling the SUV segment for quite some time now and sell cars without any practical competition. Rural and town areas are the major service sectors of Mahindra cars. Find out below about upcoming Mahindra cars in India. Mahindra XUV500 is set to get an update soon and the test car has already been spotted a couple of times. The new Mahindra XUV500 will be more than a facelift of the car. The exteriors of the car will come with all modern offering that current-generation cars are famous for. The tough competition in the similar price range has made it compulsory for the company to provide something unique and attractive to the consumers. The new Mahindra XUV500 will come with exterior features like LED headlights, DRLs, new front grille and bumper, redesigned hood and overall structure. It is expected to launch by the end of Q1 2021. 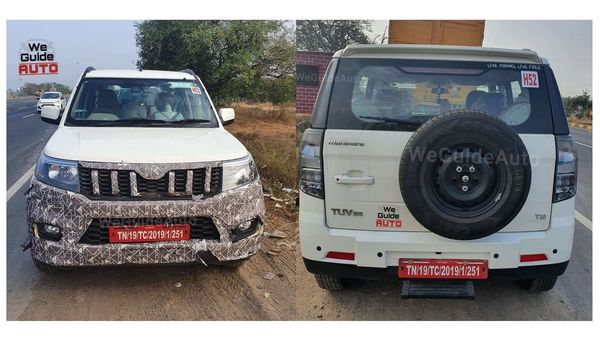 Mahindra TUV300 is an underrated car from Mahindra in India.  The TUV300 facelift has also been spotted testing multiple times this year. TUV300 is still waiting for its BS6-compliant engine along with a minor tweak to its front end to make it compliant with pedestrian safety norms. It will likely get a BS6 version of the same 1.5-litre diesel engine and transmission options as before. Updated TUV300 is expected to add Android Auto and Apple CarPlay compatibility to its 7.0-inch touchscreen infotainment system, which has become a sort of industry standard. Mahindra is likely to launch the BS6 TUV300 soon along with the facelifted TUV300 Plus. The expected launch date is around the end of 2020 and Q1 2021.

The Mahindra Scorpio next generation has already been spotted testing a couple of times in India as of now. The main feature of the next generation Mahindra Scorpio is that the new SUV is based on the next-generation Thar’s ladder-frame chassis. Mahindra Thar has already scored a 4-star rating in the Global NCAP tests so this chassis is pretty well built and sturdy. The launch of the SUV is expected sometime next year according to our sources. EVs are slowly picking up the pace with the advance in technology. Mahindra already showcased the E-KUV100 in Auto expo 2020 and the car is expected to launch next year. The eKUV will have a 150 km driving range on a single charge of its liquid-cooled lithium-ion battery pack. Powering the eKUV is a 15.9kW electric motor which is good for 54.4hp and 120Nm of torque. Mahindra claims that charging the vehicle up will take just 6 hours with a regular charger.

Also read: All about Next Generation Mahindra Scorpio Mahindra showcased one more electric vehicle in the Auto Expo 2020, i.e the Mahindra E-XUV300. Tata Nexon EV is already a sub-compact EV SUV and the Mahindra E-XUV300 will be the second entry. The Mahindra XUV300 is already the safest car in India and the EV factor will further elevate its value.  The concept car gets a closed grille with a diamond inlays in the headlight. The eXuv 300 gets an all-white colour along with ‘X’ themed elements in the grille as well as along the car. The eXuv 300 gets angular headlights that bend upwards and are outlined by a blue LED strips. The car gets the same family XUV look from the side since it is based on the XUV 300. It also gets a unique side-view camera that could replace the conventional mirror. Mahindra is also set to launch this car sooner than later.