Renault is working on the 7 Seater Grand Duster. This SUV is being tested in Europe and it will be sold under Dacia brand. It will also get Renault badging wherever required.  The French automaker is making a five and even seven seater versions. The Grand Duster will be a seven seater. So what does the new Grand Duster have in it? Does it pack in more features? We share our detailed preview on the new upcoming seven seater Renault Grand Duster.

Spyshots and rendering  make the Duster look different in both. Looking at the spyshots, it does look similar to the current Duster. The Grand Duster will get roof rails. The door handles aren’t grab on. Renault has been working on the new-generation of the Duster, and even the 7 Seater version will get similar one. The Grand Duster will be more subtle than muscular. It shall have contemporary styling. The taillamps of the Grand Duster are square in shape and it resembles some new generation Fiat vehicles, like the Renegade. In fact, the Grand Duster rendering reminds one of the Fiat Freemont SUV. This seems to be the new design language for all Dacia products. The Duster and the new Grand Duster will share the same platform, the Grand Duster will get larger wheels. The door handles in the spy shots are not grab type, as shown in the rendered images. The interiors will be similar to the existing model. Some elements like the instrument panel might be carried over. The Grand Duster will get a rugged styling similar to the existing Duster and will get features like cruise control, touch-screen infotainment system. This will also get navigation and a reverse parking camera. The overall quality of interiors will get an upgrade in the Grand Duster.

The 7 Seater Grand Duster will have similar space in the first two rows. The space for front row passengers is good, be it head room or even leg room. While the second row has enough space too. The seats are expected to slide and recline for better flexibility for the third row seating. The last row might be a little tight on space especially the knee room, but should be good enough for children. As the Duster is raised after the second row, there won’t be much room for the third row of passengers. The boot will be small when the third row of seats are raised. This means that the Duster won’t have a lot of space for luggage when all the three rows of seating are utilised.

Dacia will be the first to get the Duster. Then it will be launched under Renault badging. This is likely to happen in the second half of 2017. Deliveries will commence by the end of 2017 in Europe. However for India, it will be making its way by early 2018. Even UK will get it by early 2018.

The new-generation Duster will be larger in size and will get a new-generation of petrol and diesel engines. The existing 1.5-litre K9K engine will be tweaked for better performance and higher fuel efficiency too. It will be even offered with an automatic (AMT) transmission on the diesel engine. Renault has plans to make the current Duster into a seven-seater SUV.  The Duster will get a 1.2-litre turbo petrol engine with an option of seven-speed dual-clutch transmission and the diesel will be the 1.5-litre with 108bhp of power and sic-speed manual and AMT. 7 Seater Grand Duster will have the same engine specifications like the other Duster. Renault is looking at adding a range of new engines to the Indian car market, some could even make it to India as well. 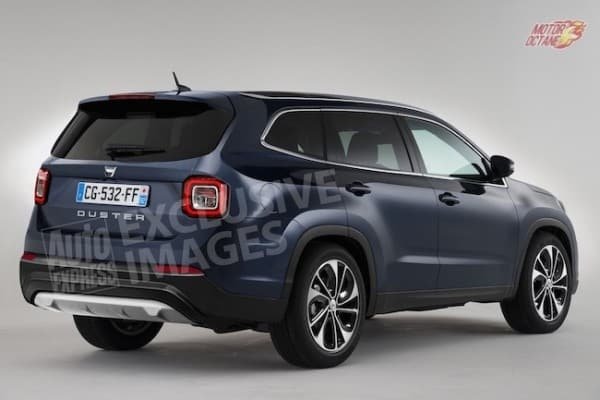 The 7 Seater Renault Grand Duster will have a fuel-efficiency of about 13km/l for the diesel engine in city, while on the highway it should be about 17km/l. There won’t be a major change in the weight of the 7 Seater version and we could expect to retain a similar weight on the Duster.

The test mule has been spotted in Europe. This will first be unveiled as a Dacia. This new SUV will be based on the Duster Oroch pick up, which was showcased at the 2014 Sao Paulo Show. Renault is looking at making India as one of its largest markets, so we can expect them to get the new-generation Duster in a short span of time. Expect the new-gen Duster to be launched in India around 2017 and this should be priced at INR 12-16 lakhs (on-road approximately), though it is a bit early to come to such a conclusion. Thanks CarPix for sharing these images with us. If you want to win some exciting goodies, email us all the spy cars you spot at admin@motoroctane.com