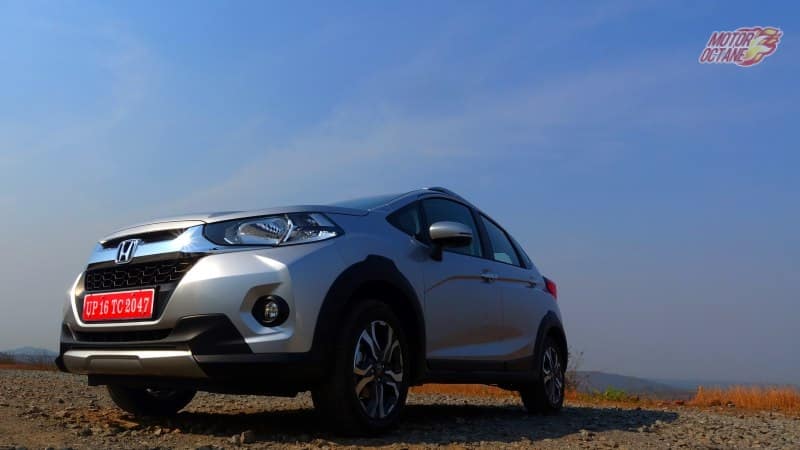 The Honda WRV has been one of the best sellers from the Japanese manufacturer. The crossover has sold more than 50,000 units, thereby becoming one of the most important products for the company. Honda WRV clocked 37,031 units last financial year and the company says that the crossover accounts for 28% of its sales. Honda WRV was conceived in India and is the first Honda product to have extensive R&D work carried out in India. This is therefore an important milestone for the company. As per Honda, 80% of the sales come for the top-of the line VX variant and only 20% were in the entry-level S variant. We have in past also pointed out that surprisingly, one of the key factors for high sales of WRV in its category has been the offering of a sunroof.

The Honda Jazz was not as big a hit as the WRV. Clearly the WRV has bettered its competition on many counts. Honda WRV is one of the best sellers in its segment which comprises of the Ford Ecosport, Maruti Vitara Brezza and the Tata Nexon. This is a compact SUV that is based on the Jazz and has a lot of similarity to the hatchback.

The exterior might not say that, and it looks like a totally different vehicle. The interiors are where there is a lot of similarity. This SUV is under 4 metres too. There are more features on offer too. The engines available are the 1.2-litre petrol with a five-speed manual and a 1.5-litre diesel with a six-speed manual. The Honda WRV offers a lot more features. In terms of space it is the same like the Jazz. There is no differentiating factor there. Should you consider buying this new compact SUV? Or look at something else?

There are only two variants available, S and VX. We reckon both are great variants to consider and you will not make a mistake if you choose any one of the variants. The VX on the diesel engine even offers push start stop and even cruise control too.

The Honda WRV looks similar to the Jazz hatchback on many counts as it is built on the same car. The design language also is the same. The WRV though, is raised higher. The ground clearance is higher and it also gets body cladding all around. This makes the WRV look rugged. The WRV also gets roof rails. It comes close to the Hyundai i20 Active, but its looks more muscular with SUV-like looks, this brings it close to the Fiat Avventura Urban Cross.The WRV has good utility and is a practical vehicle. The Honda WRV is being sold in India and South America. The vehicle is very attractive to look at. Honda Jazz is already the most practical hatchback and this characteristic is found on the WRV. It has a ground clearance of 188mm and 16-inch wheels also do some good justice to it.

There is an increase in the height of the compact SUV as the ground clearance has increased and even the new roof rails have been added. This makes it taller. Then it is more of change in design elements that makes it look different. Other aspects are almost the same.

The Honda WRV shares its engine with the Jazz. The 1.2-litre petrol engine churns about 87bhp of power and 115Nm of maximum torque. This engine comes mated to a five-speed manual transmission, which has undergone revision in its gear ratios. The diesel engine is the same 1.5-litre churning about 98bhp and 200Nm of maximum torque. This comes mated to a six-speed manual transmission. This engine now even gets lambda sensor for the first-time. This has been done to meet the BS-IV norms. The interiors of the WRV are identical to the Jazz. They are sporty and have a black and silver color theme. The dashboard layout is also same. The instrument cluster has three dials, a speedometer, tachometer and the driver information system. The WRV is rich in terms of features. It gets keyless entry, push start and stop button, touchscreen infotainment system, cruise control, dual airbags and even ABS. The cruise control and push start and stop features are available only on the diesel top-end model, VX. The infotainment system even has MirrorLink, HDMI and 2 USB and SD card slots. The WRV is a spacious vehicle. It does not get the Magic Seats offered in the Jazz, though and the rear seat also does not recline. A 60:40 split fold also is not present. However, practicality is one of the biggest USPs of this vehicle over that of the competiton. Honda aims at being the the leader in this segment. Dual airbags and ABS with EBD are offered as a standard feature across all variants. The Jazz is known for the excellent knee room and head room it has and the WRV also is the same. Three adults can sit very comfortably. There are no rear AC vents in the vehicle and we feel this would have been an important feature, specially for as the interiors are spacious.

The Honda WRV comes in six exciting colour options. There are two interior colour trims also. If you need more details on them, following is the list: The Honda WRV is high on mileage and this is one of the high points of this vehicle. The 1.2-litre petrol Has a mileage of  12-13 km/l in the city, while on the highway it is close to 16 km/l. On the other hand, the diesel engine returns close to 17 km/l in the city and about 22 km/l on the highway. The ARAI claimed mileage for the petrol engine is 17km/l, while for the diesel it is 26km/l.

The WRV gets a new cosmetic treatment and this makes it look different from the Jazz. The road presence of it is also enhanced due to this. The WRV mainly competes with the Hyundai i20 Active, Fiat Avventura, Ford Ecosport and the Maruti Vitara Brezza. While the former two are crossovers, the latter two are designed to look like proper SUVs.

The Honda WRV has the same engines as the Jazz. It has a 1.2-litre petrol with a five-speed manual transmission. The gear ratios have been changed though, for improved driveability. The petrol is a smooth engine and it is good to drive in the city. It is not outrightly powerful. To overtake, one needs to downshift, as the torque sets in late in this one. However, for the city it offers a smooth drive.The need to shift gears isn’t very often.

The diesel engine is the 1.5-litre unit with six-speed manual. This engine has very good performance. The same engine comes in the Jazz too. The diesel engine now gets a lambda sensor, which is a first in any Honda. This helps in controlled emissions. The diesel engine is quite punchy but is also noisy. The cabin could have had better insulation to reduce noise inside. This is one chink in the armour for the WRV.