Honda City is the segment leader and is moving ahead of the competition in sales number. This is the first time, a Maruti product has responded strongly to the Honda City. Recently, the Ciaz diesel even got the SHVS technology, reducing its excise duty. So, how good is the Ciaz and the City? Which one should you buy? We have done a Maruti Ciaz SHVS vs Honda City detailed comparison.

The Honda City retains a lot of styling from the previous generation and it is similar in length too. What is different is the wheelbase, which is longer. The front grille has a thick chunk of chrome on it and the headlamp design is crisp. The front bumper has round fog lamps and has sharp looking front end. The side profile of the City resembles that of its predecessor. There is a shark-like antenna. The rear styling on the City is all new. The tail lamp styling is similar to that of a BMW. The Ciaz on the other hand is a lot more premium looking. The Ciaz because of its lower height and a bit longer. This makes it look a lot longer than the City. The large front grille with the pulled back headlamps looks stylish. The side profile looks elegant with the long bonnet and the well proportioned side profile too. The rear however looks similar to that of the City. The Ciaz looks more upmarket and stylish than the City. 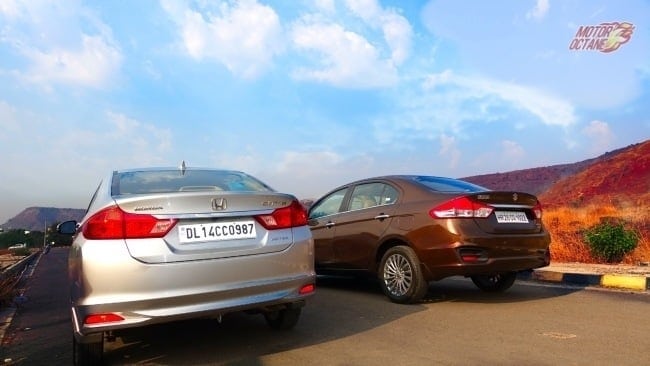 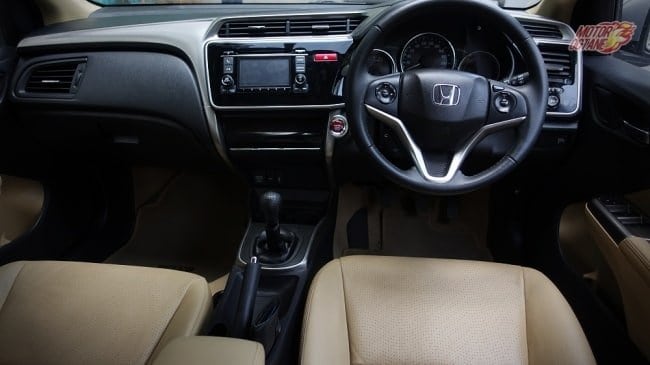 Honda City has trendy yet premium looking interiors. The black interiors with the piano black centre console looks stylish. There is a three spoke steering wheel with controls for audio and there are even cruise control buttons too. The front row seats are large and comfortable for the front row passengers. For the rear, there is sufficient room even for tall people, however the fixed head rest feels a tad small for tall people. The centre arm rest at the rear is too low. 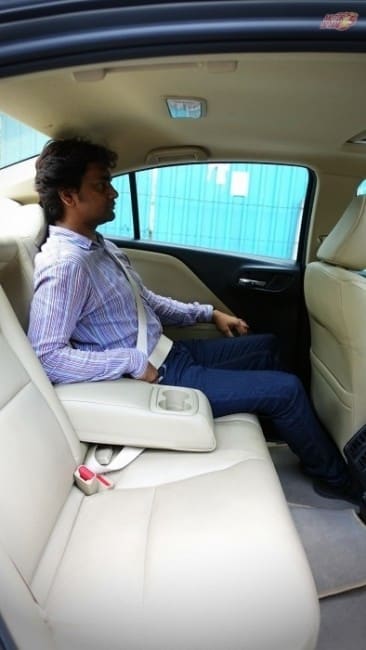 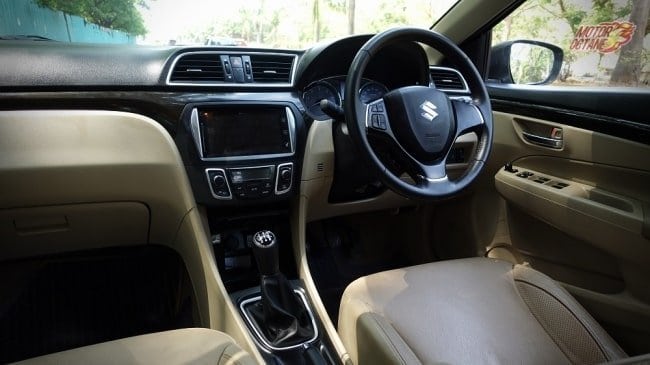 On the other hand, the interior styling of the Ciaz is a lot more subtle and feels more sophisticated. The black and beige interiors of this sedan makes it feel airy. The Ciaz SHVS has a simple dash with familiar Maruti steering wheel. The centre console has the AC vents and then a seven-inch touchscreen system too. This has maps, reverse parking camera and then below is the climate control too. The front seats of the Ciaz are spacious, and even there is good enough room for the second row as well. Where the Ciaz loses out points is the seat comfort. The Maruti Ciaz SHVS is also extremely practical. It has good enough stowage spaces just like the Honda City. There is space to keep your knick knacks, a slot for the smartphone on the right hand side of the driver, one-litre bottle holders in the doors. Then there is a 510 litre boot space on the Ciaz too. Maruti Suzuki is offering the Ciaz SHVS with dual airbags and ABS as a standard feature. The extra features on the Ciaz SHVS include projector headlamps and even auto dimming mirror as well.

The Honda City is spacious and extremely practical. In terms of practicality, the City offers good number of stowage space. The sedan has one litre bottle holders at the front and rear door pockets. Then there is space to keep the smartphones, keys, coins and toll receipts underneath the centre console. The boot size too at 510 litre is good enough. The Honda City has dual airbags and ABS as a standard feature. In features, Honda City gets cruise control and sunroof as extra features.

Honda has plonked in a more powerful engine than Maruti Suzuki. It is a lot more punchy and then you can drive it with ease. There is a lot of power at most of the engine speeds, which means you do not have to shift gears very often, be it in city or even the highway. This is one of the most strongest points of the Honda City.

This means better performance and fuel-efficiency too. But aluminium engines are a lot more noisy.  Something similar happens with lighter metal alloys that are used in engines. So, despite the insulation on the City the cabin is noisy. Talking of the numbers, City has a 1.5-litre i-DTEC (diesel) engine that chunks 98bhp of power and 200Nm of torque. This engine comes mated to a six-speed manual transmission. The gear lever is small and easy to shift. The Ciaz SHVS on the other hand has a 1.3-litre diesel engine with SHVS technology. Now, this is the hybrid start stop system that even has brake regeneration. This is the same 1.3-litre engine that was there on the Ciaz. This hybrid system helps to improve the fuel-efficiency. The drivability of the Ciaz SHVS is good and is easy to drive in the city or even on the highway. This diesel engine comes with a five-speed manual transmission. The gear box is a bit rubbery. The SHVS functions very smoothly. What we like about it is that it doesn’t switch off abruptly and switches on quickly the moment you press the clutch. 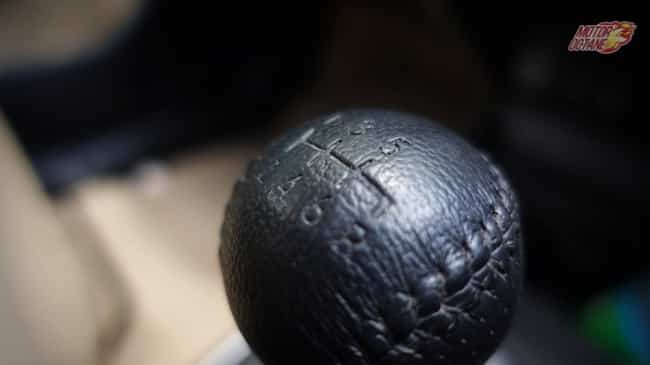 In terms of ride quality, the Honda has good plaint ride at the front. At the rear though it gets a bit bumpy on roads with bad surfaces. This makes it a bit uneasy. On the other hand, the ride on the Ciaz impressed us as it was a tad more superior to the City. Be it front or even the back. In handling, the City did a good job, in fact it felt better than the Ciaz. Both have good driving dynamics, but it is the City that makes you feel a lot more confident. This is one of the strong points for the City.

Both the sedans are great products, just that Ciaz SHVS is a better value for money than the City. Also, the Ciaz feels more refined and durable too. In terms of power, it is still the City that has an advantage. So, if you need a petrol engine then shut your eyes an buy the City, but for diesel we recommend the Ciaz SHVS for its refinement and price point.