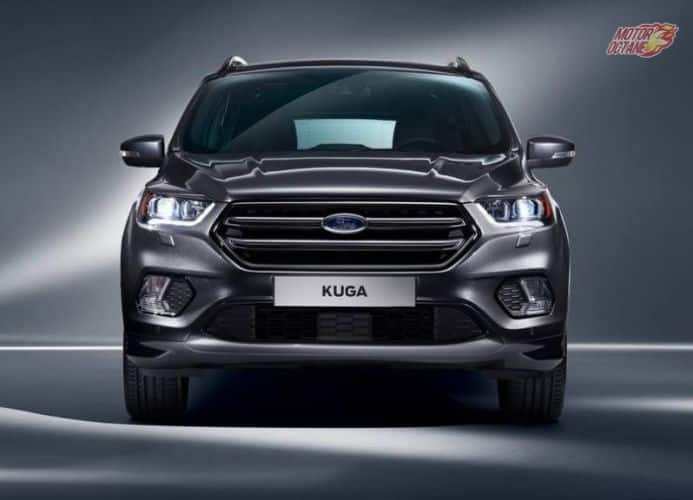 Ford has been leading in the SUV segment in India. The Ecosport has been a runaway success for the company and the new Endeavour also has commanded a decent market share. Ford will be getting another SUV now, in a segment it has not operated in before.  This is the Ford Kuga. The Kuga will directly rival the Jeep Compass, as it will be priced in the similar bracket. Ford SUVs have made a good presence in Inda. Ford is now gearing up to get its third SUV in India. This will be a local production and will be made in the company’s Chennai plant. Both Ecosport and Endeavour are manufactured in Chennai. The Ford Kuga is also expected to be built there.

The Ford Kuga India will be an upmarket product and will be good to drive. It is a five-seater SUV and will have petrol and diesel engines. Automatic and 4×4 variants will be offered in this SUV. Ford will try to grab some market share out of the Jeep Compass, which is selling well at the moment. It will come with a 2.0-litre diesel engine. This SUV will also be feature loaded and is expected to have best-in-class features. What will the Ford Kuga be like? Will it be a good buy? Read further to know about this upcoming SUV

The Kuga’s pricing is expected to be between ₹ 17 lakhs to ₹ 26 lakhs (on-road price). This is alleged pricing and this will be directly targeting the Jeep Compass. This will be a five-seater SUV and will have more features than the Jeep Compass. Jeep has seen major growth in its sales with the Compass, despite delays in delivery and no diesel automatic yet. The Jeep Compass Trailhawk is also slated for a launch this year, which will get 4×4 and automatic in diesel. Ford could fill in that gap and it will be perfect opportunity to get it as Jeep is still not prepared to get the automatic to the Indian car market. There is only the Hyundai Tucson that comes with a 4×4 and automatic. Hyundai’s pricing is much higher than the Compass and hence it isn’t a favorite in numbers.

The new Kuga SUV is expected to come in by early 2019. There is no official statement from Ford so far, but the company is working on getting this SUV. The Kuga will be exported from India and hence the localization also would be higher. This will, in turn, help the Endeavour as well, as there will be a lot of part sharing. The Rpickupick-up will also be exported from India. The Ranger was spotted at the ARAI in 2016, while it was testing for homologation.

The Kuga gets all new different interiors. The interiors are all black and this does look sporty. The interiors of the Kuga are somewhat like the Endeavour as it does share some parts with it. The center console has a large touchscreen infotainment system that even has Apple CarPlay and Android Auto. It gets SYNC3 and maps too. There are six airbags, ABS with EBD, ESP, brake assist and leather seats. there is more than sufficient space in both the rows and there is rear AC vent also.

This will be a five-seater. It will have an 8 or 10-inch touchscreen infotainment system. There will be Android Auto and Apple CarPlay. There shall be cruise control, tyre pressure monitoring system, sunroof, rear AC vents, projector headlamps, daytime running LEDs and tail lamp LEDs too. It could be getting leather upholstery and even reclining rear seats. The boot space will be about 500 liters and even it will boast higher ground clearance. The new Kuga’s design is similar to all the new Ford SUVs. In fact, the front will resemble the Ecosport and even the Endeavour. There is a large chunky grille with chrome slate on it. The headlamps are well chiseled and the fog lamps meld with the design. There will be 18-inch alloy wheels, integrated spoiler. The side profile will look like a crossover. Ford Kuga’s front has a good amount of road presence, while the aggressive continues to the rear. This SUV will be a good option to consider for those looking at a mid size premium SUV.

Also Read: Is the new Santro worth considering?

There are a lot of bits that make it look like the Ecosport or even the Endeavour. This follows Ford’s SUV design language. There will 17-inch wheels and it even has projector headlamps and daytime running LEDs. There will be more than sufficient features on offer too. The Ford Kuga India will be offered with a 2.0-litre diesel engine. This will be producing about 150bhp of power and will be coming with a six-speed manual and automatic transmission options. This will be a good option to consider, as the majority of SUV buyers are preferring a petrol engine.

On the other hand, for those who are looking to get themselves a petrol engine, we reckon there will be the 1.5-litre Dragon engine. This will be a new three-cylinder engine that is categorised as the Dragon family. The 1.5-litre petrol will produce about 170bhp of power and will have 400Nm of peak torque. The Kuga is also expected to have higher ground clearance than the Compass, making it a much better option to off-road too. The diesel manual and automatic will be offered with 4×4 variants. This will be the engine that will make it exciting for the enthusiasts.

There will also be an ST variant which will be a very exciting offering for those who are looking at a performance oriented cruising machine. The car will be more in tune with the dynamics needed for handling and an exciting drive.

Also Read: Why is Ford making a deal with Mahindra?

The Ford Kuga India will be competing with the Hyundai Tucson, Mahindra XUV500,  and the Tata Hexa. This will be a more premium SUV, however, this will be a five-seater. The product to be most affected by Kuga will be the Jeep Compass. This is one vehicle that will see a major competition.