As everyone is looking at targeting the Royal Enfield segment, Kawasaki Estrella will be the first bike in this segment. The Kawasaki brand has been aggressive in the recent past as the company it introduced the Versys 650, increased the localisation of the Z800 reducing the price by INR 1 lakh. Kawasaki will be introducing a new bike in India this year that will be competing with the Royal Enfield.

We have confirmed information that the Japanese bike maker based in Pune will be getting a 250cc-400cc bike that will be competing with the Royal Enfields. These engines will have the thump but they will have better reliability and power too. Kawasaki has a few long-stroke engines that it is considering to introduce in India against the Royal Enfield’s 350cc bike. Kawasaki has increased the localisation content on its bikes and this RE competitor will have very high very localisation too. 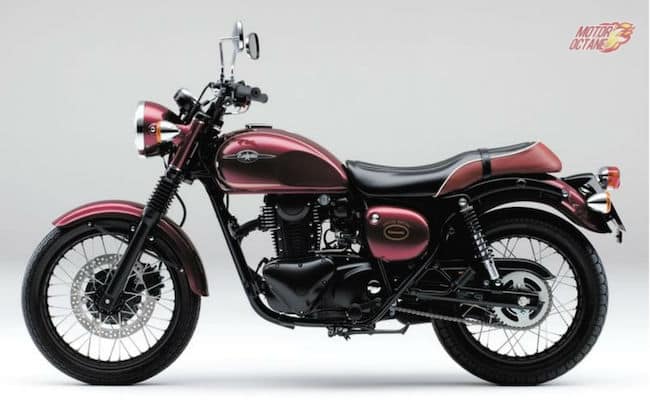 This will help Kawasaki to attract multiple buyers who need a bike that can turn around heads and at the same time even have good reliability too. We reckon it will the Kawasaki BJ250 (Kawasaki Estrella) that will be making its way into India.  Initially, there might no safety features, later on it will be offering an ABS option too. This will be Kawasaki’s first off-the-beat from sports bikes in India. This bike is sold in South East Asia and the company will want gain popularity and even volumes with this new bike in India too. This bike segment is on the rise and even a minor gain will boost sales for Kawasaki.

The BJ250 will be priced at about INR 1.5 lakhs (on-road). This will be extremely competitive against the RE bikes, and Kawasaki will produce similar power from a 250cc engine.

Expect Kawasaki to launch the Estrella (BJ250) towards early 2017.