Your want for an affordable naked street fight is answered by Yamaha. The 2019 Yamaha MT-15 was launched on March 15th. This is a great bike to consider along with the recently launched KTM Duke 125. The bike has a modern and aggressive new design. Along with that, the bike is made with a great amount of thought given to the design. With the launch of the 2019 Yamaha MT-15, the company has stepped into a new direction. Yamaha as a manufacturer only wanted to focus on the performance market in India.

Yamaha could not make a major dent in the commuter market and now the bikes like the MT-15 will only make sense for them.  It will be Yamaha’s first MT motorcycle to be built in India, as the other bike in the range, the MT-09, is a CBU product. The Yamaha MT-15 is basically the naked version of the popular Yamaha R15 v3.0. The new motorcycle is priced at RS. 1.36 lakhs – RS. 1.38 lakhs. Therefore it will compete against the new KTM 125 Duke. The 2019 Yamaha MT-15 has launched on March 15th. This is the first all-new product by Yamaha. The bike is Yamaha’s first major launch sans the ABS variants announcement on the 21st, last month. The bike is priced at Rs 1.49 lakhs. This bike will target the Apache 180 and the KTM Duke 125. Yamaha has made sure the pricing is aggressive and leave a lot of stuff for accessories and make the bike more customizable. This made the bike very well sales in the first two months where it beat the sales of KTM125. However, in the last month, the sales of MT-15 have dropped so much that it fell behind the KTM 125. This might be because KTM 125 sales could have picked up. Another reason for the drop in sales of MT-15 would be the lack of advertising after the launch of the bike. As of now, the bike is not pushed enough by the company.

The design of the bike is the same as the one sold in the international market. The seat is also the same, and the headlight silhouette indicates the bike gets the same LED unit as the Thai-spec bike. However, Yamaha has chosen to go with telescopic forks upfront and a box-section swingarm at the rear. This has been done to keep prices in check. The one in the Thailand market gets inverted forks and an aluminum swingarm. The alloy wheels in the India-spec bike are also taken from the R15 v3.0 which is again a cost-effective measure. Overall Yamaha has focussed a lot on the price which has to lead to the initial sales. 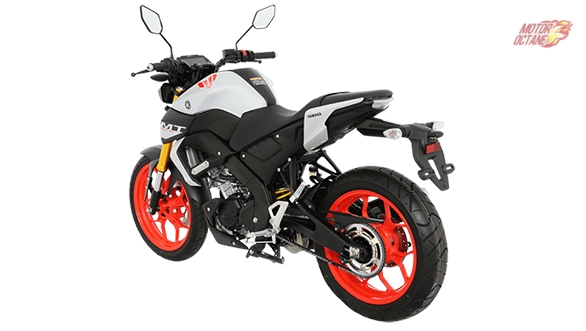 The 2019 Yamaha MT-15 carries R15 v3.0’s motor in the same state of tune. The single-cylinder engine with VVA generates 19bhp at 10,000rpm and 14Nm of torque at 8500rpm. The 6-speed gearbox with assist and slipper clutch will be paired with this engine. The 2019 Yamaha MT-15 will majorly compete with the KTM Duke 125 in looks, performance and also price. This bike is the only bike that comes close to the KTM 125. Therefore it becomes difficult to change the mind of the KTM lovers.