The BMW G310R has been launched at 2.99 lakhs (ex-showroom). Buyers have been waiting for its launch, ever since it was first revealed. The bike was also showcased at the Auto Expo 2018. The BMW tag is expected to pull crowd and a high response for this bike is expected.  G310R is expected to be the volume churner for BMW. The company has a partnership with TVS, who will be contract manufacturing this motorcycle under BMW brand. This bike will be manufactured for BMW at their Hosur plant. Infact, there will be many common components with the TVS Apache 310 RR. This includes the engine, chassis, brakes, alloy wheels and few more parts. The bike will be tuned in a different manner and also the styling of the G310R will be unique. This is a naked design, which is also very popular among riders.

First seen at EICMA 2015, the G310R is now being sold in several European and American markets. Some South Asian markets are also selling this bike. The TVS BMW G310R is likely to be priced lower than the KTM Duke 390. This will also be one of the attractions in addition to the BMW badge. While it will not be as powerful or feature loaded as the Duke 390, it will pack in enough juice for the price tag it will come at. Read further about the BMW G310R Price in India, Specifications, Power, Top Speed and all other details.

The G310 R has been priced at INR 2.99 lakhs ex-showroom. This is higher than we had expected it to be. The G310R is now more expensive than the KTM Duke 390. We feel that it could have been about 20,000 cheaper, which would make it good value. It is yet to be seen if the BMW badge would benefit the sales of this bike. As per the company brochure, the BMW G310R should have a top speed of 143 km/hr. This will be a bit lesser than what is for the Duke 390. So, more focus could be implemented on the acceleration, which would have reduced the top speed. As this is more of a commuter bike in other markets, for India there could be some tweaking in the gear ratio.

As per the company claimed figure, the BMW G310R will reach from naught to 100 km/hr in about 6.8 seconds. This is certainly less than the KTM Duke 390, which does it in under 6 seconds. So, the BMW G310R won’t be all about performance.

The German bike maker has designed the bike in a manner to keep it light weight. The engine has been tweaked for good performance and mileage too. We reckon the efficiency of the G310R should be about 36 km/l in the city, while on the highway it should go up to 31 km/l. So, the average of both (combined mileage) should be about 29 km/l. The bike will have a 11 litre fuel tank. This should have a range of about 300-320 kms, which is decent enough for a bike of this size.

BMW G310R is a stylish looking street naked. Being fully naked bike it looks mean and at the same time is sophisticated as well. There is a muscular fuel tank, which isn’t very large though. The BMW asymmetric headlamp doesn’t make it on this small bike. It gets a regular headlamp. There is a stepped seat too. The G310R has inverted front forks and there is some extra cladding under the fuel tank. The bike has a neat and well-balanced side profile. The rear is raised as there is a monoshock suspension. The bike does look stylish from the rear too. The black alloy wheels looks appealing too. This bike is classy and has not got in-the-face looks. The BMW G310R gets a 313cc single-cylinder engine that churns about 33bhp of power at 9,500rpm and 28Nm of maximum torque at 7,500rpm. This is an all new engine from the bike maker and this will be a high-revving one. BMW’s engine technology has been one of the finest and we won’t doubt this one. This one should have good performance and it will have linear power too. This has a six-speed gearbox. We aren’t certain on how much more powerful will it be from the KTM Duke 390, at least in the real world until we ride it. BMW G310R has used a tube frame chassis, which is also light weight just like the Duke. At the same time, BMW’s engine should have not just better output as per its capacity but even better refinement. The BMW G310R will have a well-tuned exhaust note too.

BMW has made a naked bike, but this one will have riding and handling characteristics just like any other BMW. The bike should have good ride and handling balance. Inverted telescopic forks are used up front as the suspension and the rear gets monoshock. The bike has 300mm front disc brake and rear one is 240mm. At the same time, the bike has dual-channel ABS as well. BMW is offering 17-inch wheels and the front tyre spec is 110/70 and the rear is 150/60. 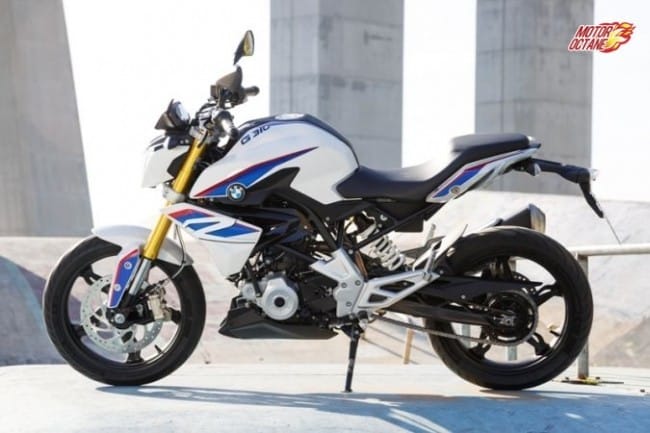 The BMW G310R will come in three colour options, which are Strato Blue Metallic, Cosmic Black and Pearl White Metallic. These will be the three colours in which the bike shall be offered in.