The 125cc motorcycle segment has never been better before. There are quite a number of bikes sold in this category. Honda has been the undisputed leader in the 125cc segment, with its popular 125cc motorcycle Honda CB Shine. However, now it comes with an improvement called the Honda CB Shine SP. What is new in this motorcycle? We tell you the details in our review.

The Honda CB Shine ticks all of the check boxes that are required by the Indian consumer today. With a frugal, yet refined motor, comfortable ride and reliability, the Honda CB Shine is indeed a favourite. It accounts for over 46 per cent market share in the 125cc motorcycle segment in India. With the launch of the Honda CB Shine SP, the company plans to bite into a bigger slice of pie from this segment. The Honda CB Shine SP will sell alongside the old Shine but will be positioned as a premium version of the bike. Together Honda plans to sell over 11 lakh motorcycles a year. Let us now see what the Honda Shine SP is is all about. The Honda Shine SP looks very similar to the current Shine model. It is hard to tell the difference until one is educated in it. There are a lot of changed make in design but on the overall first look it may just pass off as a facelifted Shine. The Honda CB Shine SP now looks a lot more refreshed and premium as compared to the Shine. The Honda CB Shine SP is powered by the same 125cc, single-cylinder, air-cooled engine that powers the current CB Shine. The engine is a refined unit with decent performance, making 10.6bhp of power and 10.3Nm of peak torque. The only difference in the Honda CB Shine SP is that it now gets a five-speed gearbox compared to the earlier four-speed unit on the CB Shine.

The CB Shine has always been a market benchmark in its segment. But where it was a bit of a letdown was in high speeds and in higher revs of the engine, where the refinement loses out and the engine becomes a bit rough in terms of vibrations. Power delivery in the Honda CB Shine SP is linear and the first thing we noticed is the silky smooth performance of the engine. Additionally now with the addition of the fifth gear, the bike is a lot more frugal on fuel as well as has a much better all round gear ratios to tackle the city and the highways. The engine does not feel as stressed on the highways especially on higher revs. The clutch of Honda CB Shine SP is very smooth and does not feel spongy even after heavy city riding.

Honda claims fuel economy figures of around 65kmpl, so the Honda CB Shine SP is expected to be quite efficient as well. It should return around 50km/l in the city and around 60 km/l on highway conditions, in real world riding conditions.

The ride quality of the Honda CB Shine SP is top notch. It comfortably soaks of most of the pot holes and does not lose its composure while doing so. Highway stability is quite impressive as well. This being said, we did feel that the seat was a tad small especially for well built riders. The riding position is comfortable and it takes to corners willingly and without instilling any surprises or sense of uneasiness for the rider. Overall, it’s a decent handling bike with comfortable ride quality. The Combi-Brake System on the Honda CB Shine SP works really well and braking is quite good, shaving off speeds quite effectively under hard braking. Prices of the Honda CB Shine SP start at INR 67000 for the drum brake variant and go upto INR 72ooo (on-road, Delhi) for the Combi-Brake system that we loved.

As mentioned earlier, the new Honda CB Shine SP at best, could be called a facelift of the Honda CB Shine. Sure, it has an added features – the most significant being the new five-speed gearbox, and a few cosmetic upgrades. 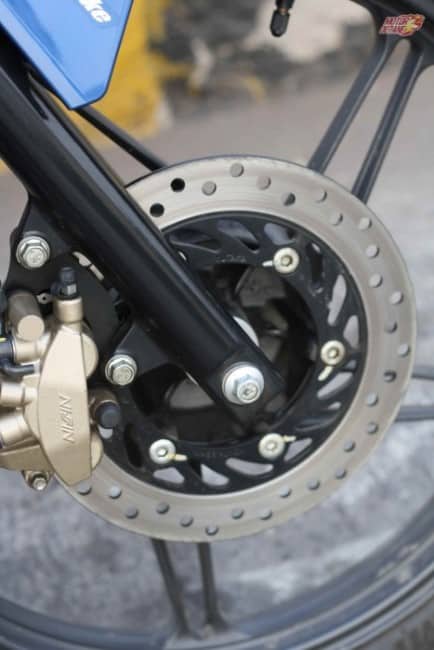 It’s a well rounded product and with spruced up styling and features, it will certainly appeal to young motorcycle buyers. That fifth gear does seem to make the Honda CB Shine SP feel effortless at high speeds. What also impressed us are the brakes, thanks to the Combi-Brake System. So, well rounded product, decent performance and backed by Honda brand equity, the new Honda CB Shine SP has a lot going for it.