The Mahindra Alturas G4 is the new flagship SUV in the Mahindra stable. It comes with a 2.2-litre diesel engine which is paired to a automatic gearbox sourced from Mercedes. The engine makes 184bhp and 420Nm of torque. The car get shift-on-fly 4×4 too. There will be a variant with only two wheel drive called the G2. The car is essentially a rebaged Rexton with the signature, Mahindra seven slate grille. The cars not changed visually at all since the first time we saw it at the 2016 Auto Expo. It gets DRLs, Projector headlamps and LED tail lights. The car also gets a 360 degree parking camera; that is apt for a vehicle which is almost 15 feet long and more than 4 feet wide. The entry to the driver seat is easy and simple with the welcome gesture that involves sliding the electronic seat completely back for easy ingress. The front driver and passenger seats are ventilated and the whole interior and other seats are done up in soft and supple Napa leather. The cars also got a brilliant instrument cluster which has navigation, infotainment and wait for it… 3 different speedomteres in case you don’t like the regular analogue. The infotainment screen is a 8-inch unit that gets Android Auto and Apple CarPlay. The 2nd row gets a armrest with intigrated cup holders. There are AC vents at back with 2 personal vents for the third row too. The cars third row is really it’s Achilles heal. it is quite litraly the worst part of the car to be in for a long journey. It is fine for children whom parents should pray got to sleep. Also the third is too claustrophobic with absolutely no glass area. The bootspace is decent and the last row does fold flat to make the space large. The car will also gets a decent size sunroof and 9 airbags as standard which is the most in this segment. 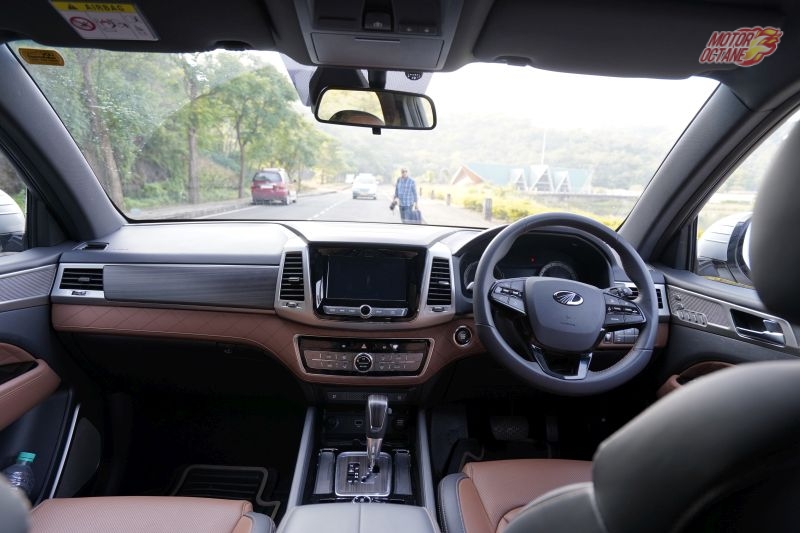 Let’s talk about the drive. First, lets put this car in reverse, and see the side rear view mirrors on the car tilt down and help one back up this giant with easy. That said, the Toyota Fortuner does have a better turning radius and comes with a more agile steering wheel. But what the Fortuner does not have is steering feedback, something many SUV owners take for granted, the Alturas G4’s steering becomes heavy in a liner fashion when one puts his foot down and around corners the steering will let you know everything from grip to the texture of the road. The ride is not compromised at all. In spite of being a big ladder on frame rig, the Alturas G4 managed to keep it’s weight in check and did not roll around to much. The nine-speed Mercedes gearbox also responded quickly under duress and down shifts before corners and upshits while hauling on straight roads were quick from the triptonic unit. The engine is always in the meaty power band of this car. In a staight line thought we do think that the Fortuner and the Endeavor with engines having bigger displacement will completely leave the Alturas eating their dust. The verdict is pretty simple. As the price of this car is yet to be released; we can only say that if it comes in Rs 5 to Rs 7 lakhs cheaper than the Fortuner, the Mahindra Alturas G4 will be a steal. The car is built tough, the engine is refined with hardly any noise in the cabin, there is decent space on offer. We just hope its priced right. Check out our detaild review of the Mahindra Alturas G4 below-

What do you think about the Mahindra Alturas G4? Do let us know in the comments below!