Home Reviews Hyundai i20 Active offered with discount of INR 25,000

Narendra Modi’s marketing campaign for Lok Sabha 2014 was revolutionary. This turned the fortunate of the party as it showcased an example of how a major turn-around could happen when a strong leader with a successful role model enters the battle of the world’s largest elections. The leader was Mr Narendra Modi and role model was the development in Gujarat. BJP won the elections with counting ally votes but the Modi effect has been so strong that even Haryana and Maharashtra elections ensured a majority for the Lotus-symbol party. The trust in the name and the brand is one of the strong reasons for this turnover that BJP that along with Shiv Sena had a 30% vote share in 2009, now got 30% alone in 2014 elections without the Sena. The trust factor helps, be it for politics, electronics and even cars. The car in question is from a brand that has being winning hearts of car buyers for the last 15 years— Hyundai. To look at the positive side, Hyundai was one of the few foreign company that introduced the latest car models in India, where all other European brands were playing safe by selling out-dated models in India in the late 1990s. The Santro and Accent became a runaway success for Hyundai and then since the introduction of the Fluidic Design, the Korean manufacturer has even captured the Elantra market busting its image as a small car manufacturer. Today, Hyundai is the second largest shareholder in Indian car market and India’s largest car exporting company. The i20 has been successful and with the same platform, Hyundai has entered the compact crossover segment. Enters, the Hyundai i20 Active.

There is a discount of INR 25,000 on the petrol and diesel engines both. If you are looking book yourself one in Mumbai, Delhi, Pune, Hyderabad or Bengaluru, leave your contact below. The Hyundai i20 Active retains similar front styling to the Elite i20, with a similar headlamp design and narrow front grille however it also gets the array of LEDs in it. The i20 Active looks muscular and o-boy it turned every head and eyes weren’t moving off this crossover whenever we stopped at a signal. The interiors of the i20 aren’t much different from the Elite i20. The quality of the materials used is first-rate and this is the best in its segment, I will rate it higher than the Verna too. The orange and black interiors look trendy, however my personal pick might have been red and black. There is sufficient space on the inside considering legroom and head room in the first row and there is sufficient knee-room in the second row too. The thigh support in the second row could have been better. The second row seats could have had more recline for better comfort. To increase the convenience and faster cooling of the cabin, there is a rear AC vent too. Even the size of the boot is sufficient for long trips, I think the boot should have opened like an SUV, the swinging one than a hatch-style. In terms of features, Hyundai has always loaded its cars with maximum brownies. The i20 Active gets an in-built music system with steering mounted audio controls, with Bluetooth connectivity, aux and USB connections too from the S variant. The top-of-the-line variant also gets 1 GB of internal storage for music, though I do not understand why does one need only 1 GB. The Bluetooth connectivity has audio streaming. The new generation steering wheel does look good and so are the twin-dials, which can be read easily. There is a driver information system that has trip details, but it misses out on distance to empty and mileage, which generally comes very handy in information system. The i20 Active gets two engine options, first is a 1.2-litre petrol and second is the 1.4-litre U2 diesel. First is the petrol engine. This engine also powers the i20, and it produces 81bhp and 114Nm of torque. The engine is extremely quiet and there isn’t much vibrations. The engine does pull well but only at high-rpm, which means you need go up to 3,500rpm every time you drive in traffic. You need to alter a bit of your driving style, else get used to shifting gears much often to move fast, especially in traffic. For relaxed driving, this engine power is sufficient. For that quick overtake you need to downshift, be it in city or on an open road. The diesel engine is a 1.4-litre that produces a good power of 90bhp and 220Nm. One thing that has impressed be about this engine is its quietness and the vibrations that are minimal, despite being a diesel. The output on paper is decent, but in reality it is linear increase and there is sufficient power to pull at low engine speeds. The final drive of the i20 Active has been shortened when compared to the Elite i20, making it extremely easy to drive. This makes it effort less as one doesn’t really have to shift gears often in city traffic. Even for overtaking most of the times there is sufficient power to pull. This comes mated to a six-speed manual transmission that is again easy to shift. The diesel gave us a mileage of 16km/l in the city under normal driving conditions and 20km/l on the highway. 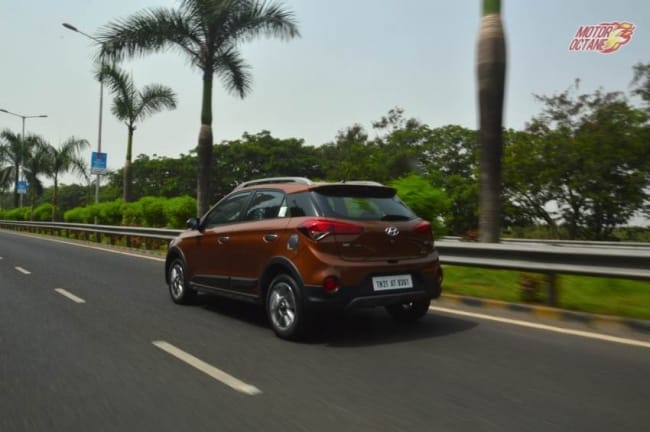 The five-speed manual gear levers are easy to shift and do not feel rubbery. Even the throws of the gear lever are short and easier to change. In city, the petrol will return about a fuel efficiency of 13.8km/l under normal driving.

Drive it on bad pot holes, broken tarmac and high speeds. The suspension is very good as you do not feel most of the bumps and your comfort isn’t compromised. The steering wheel also feels connected to a good extent, possibly the best in Hyundais. Go fast around a turn and won’t feel that roll. The i20 Active has minimal roll. It can’t be compared to the alacrity of its European competitors but it is fine, as the i20 Active isn’t built for track driving, it has been designed for daily comfortable driving and it does it well.

Just like Mr Modi, Hyundai has won hearts of several Indians and it will continue to do so. The design of the i20 Active might not be extraordinary, but its practicality and features overshadow that aspect. It has decent engines and a very good service backing. This makes i20 Active as a great option in the compact sedan segment. We recommend buy the S variant, if you want the best value for money and do not want the top-of-the-line, with features like ABS, in-built music system and other necessity in terms of features. This is certainly the best car to buy in this price, everyone who saw or sat in the i20 Active was impressed by it.