This April nearly 100 teams will be competing in the Rickshaw Run, a 3,000 kilometre race across the most rugged northern reaches of India in a 7bhp three-wheeled rickshaw. It is organised by a UK-based group known as The Adventurists, and one of the mandatory requirements of competing is that each team must raise a minimum of Rs 1 lakh for charities helping out local communities in India.

MotorOctane.com is cheering for the team of three travellers and professional bloggers, Ryan Brown, Derek Freal and Rutavi Mehta, will be embarking on one of the most dangerous races in the world — all in the name of adventure and charity. When Ryan, Derek and Rutavi arrive in north-west India on April 1st, they will have just three days to prepare their rickshaw and learn to drive the awkward and dangerous vehicle before leaving Jaisalmer in the west, bound for Shillong in the far east. The route in between is a complete free-for-all, with every team blazing their own path. What the road holds for them during this two-week road trip is completely unknown. These three and their rickshaw will have to pass through mountainous terrain, cross rivers, traverse plains, and survive whatever else Mother Nature and the impressive yet unpredictable India may throw in their way.

Throughout the trip they will be filming and photographing every kilometre of the amazing journey, documenting and sharing the unique and diverse culture of the roads less travelled in India for all the world to see. Those interested will be able to watch daily video episodes on YouTube or follow along through social media and their blogs. 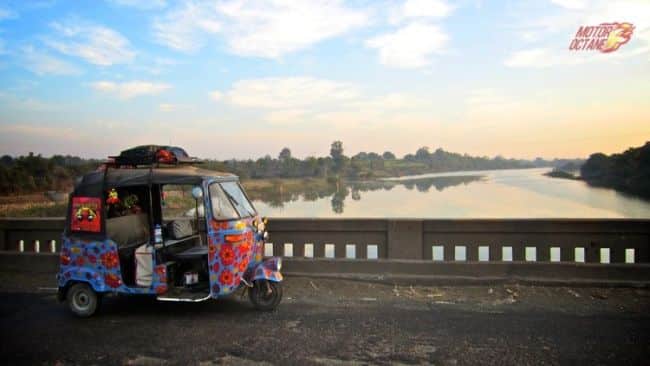 The Rickshaw Run began in 2006 and has grown and evolved ever since, with many route changes over the years. It is an arduous journey and there has never been a single run where every team has finished. In fact usually only around 90% of those competing in the race actually cross the finish line two weeks later. As such, the Rickshaw Run is not about who takes home the gold but rather just in finishing with all your limbs in tact. There is no prize for the team that comes in first place other than bragging rights and the personal satisfaction that comes with knowing they can now leave this world confident in the knowledge that they have undertaken and survived one of the most wild and adventurous races ever to take place.