The Toyota Vios will make it into India most likely. Toyota my also showcase it at the upcoming Auto Expo 2018. A launch around mid 2018 is expected for this new sedan. The Vios will compete with the Honda City and Maruti Ciaz. As the next car from the Japanese giant, the Vios will hold lot of promise. The Toyota Vios competes with the Honda City in other international markets as well. It shares its platform with the Etios, however, it is much more premium. Read on for our detailed Toyota Vios preview.

One of our sources has confirmed that the new Vios will not come to India with a diesel engine. The petrol engine on the Vios will be the same 1.5-litre petrol. There will be bump up in its power, but aren’t certain if there will be a diesel engine anytime soon on offer.

The price of the Toyota Vios is expected to be priced between Rs 8.5 to Rs 14 lakhs (on-road). There should be an automatic and this should be the CVT from the Corolla Altis. Toyota is looking at adding this sedan at the earliest.

The Toyota Vios is expected to come to India only by mid 2018. The unveil will be the at the 2018 Auto Expo, which is in February at the Greater Noida ExpoMart.

The Etios platform is what the Vios is based on. However, the positioning of this sedan will be higher than the Etios. The Vios will be a much more premium sedan in every way. This is true for the design, interiors and even the features. The Toyota Vios resembles the Corolla Altis to a great extent. It gets the new Toyota design language. It has a twin slat grille and a chrome plated Toyota logo is placed in the centre. This is seen in most Toyota cars now. 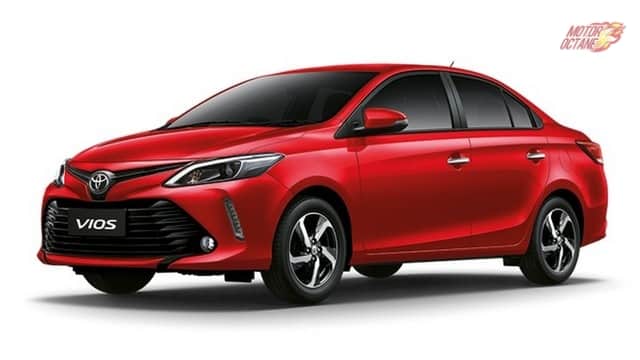 The headlamps look similar to the Corolla and are equally sharp too. The stylish front bumper has a large air intake which is trapezoidal in shape. The intake is black coloured and hence provides an aggressive look to the car. There are round fog lamps which are housed in blacked bezels. The chinky bonnet has two grooves on the sides and hence looks muscular. The side of the car has a high shoulder line. This extends to a rear design which is similar to the Corolla Altis and Camry. The wrap-around tail lamps look very much a part of the Toyota family and have a chrome sill running in between them. It is now more aggressive than before, due to the new LEDs and the bolder front grille. The Vios looks like a smaller Corolla Altis. This sedan may come with 16-inch wheels as even the competition is moving towards the same. 1 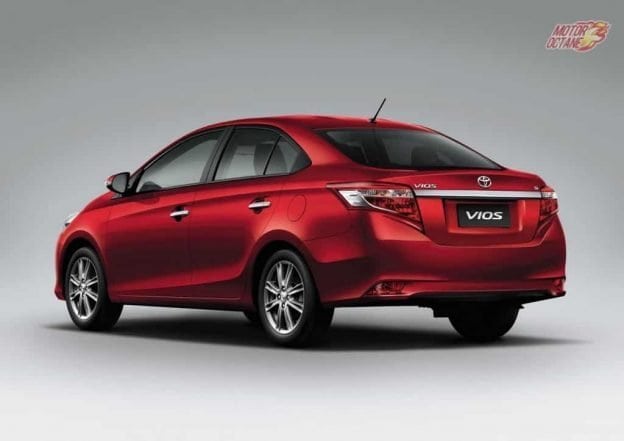 Interiors will be quite stylish and different form what we have seen in earlier Toyota cars. The dashboard has a waterfall styling and the colour theme is all black. The audio system with a touchscreen is housed in the centre. The new touchscreen will be available on the higher variants, which will also have reverse camera and navigation. The AC vents are placed below the center console. Further below are the climate control switches. A brand new steering wheel comes in the Toyota Vios. This steering wheel is a first in any Toyota. It looks chunky and has audio and Bluetooth controls mounted on it. The instrument panel three conventional dials. The information they display is the odometer & trip meter reading, cruising range, average fuel consumption and average driving speed etc.

The car gets keyless entry. It also gets push button start and electric boot release. This makes it very convenient. It also gets a 60:40 rear seat fold and a huge 506-litre boot. The central floor at the rear is flat and makes for comfortable seating of three people. The internal door handles are finished in bright silver colour. The black seat fabrics make the car look premium and it has decent space on the inside.

The Toyota Vios ids expected to be a feature loaded car as it will need to compete with the Honda City and Hyundai Verna. The one launched in Thailand features projector headlamps, fog lamps, 16-inch alloy wheel choices, a push button start, remote Smart Key and a multi-function steering wheel.The Vios will have enough safety features to match the segment including dual front airbags, ABS with EBD and Braking Assist (BA) continue. The Thailand version also has Vehicle Stability Control (VSC) on offer, which is first in the segment.

The Toyota Vios will be powered by a 1.5-litre petrol engine. The petrol engine is likely to produce 100bhp or 106bhp. The diesel engine will not be coming in on the Vios. These engines will come mated to a five-speed manual transmission instead of a six-speed one. A six-speed automatic is also likely to be introduced.

The suspension system offers a comfortable ride. Toyota will focus more on rear seat comfort as this is what an average India buyer / executive prefers. The diesel will come with a six speed manual transmission.There will not be an automatic in the diesel. 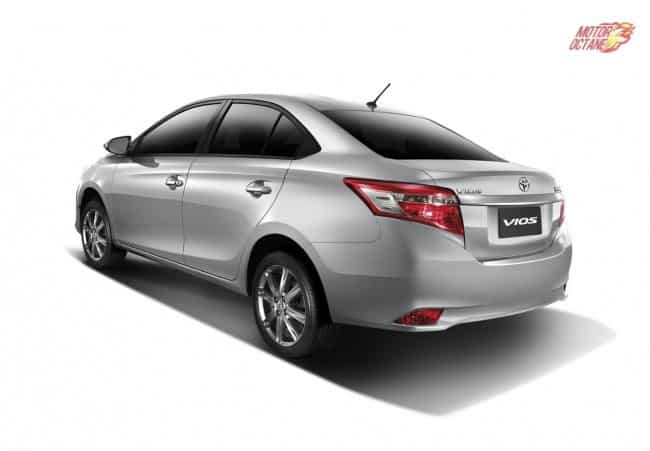 The Vios will challenge the Honda City 2017, Maruti Suzuki Ciaz and the Hyundai Verna  2017 primarily. The other competing products will be the Nissan Sunny and the Volkswagen Vento. Then there is also the Fiat Linea and the Skoda Rapid as well.