The hatchback segment has always been the hottest, with maximum players here. Now the hatchback segment is further divided into three major sub-segments such as entry-level, mid-size and premium hatchbacks. Depending upon the price and features available, these hatchbacks build their own appeal. We compare three such vehicles which fall into the mid-size hatchback segment. These are Maruti Ignis, Hyundai Grand i10 and Mahindra KUV100. Maruti Ignis vs Hyundai Grand i10 vs Mahindra KUV100 Dimensions

Maruti Ignis vs Hyundai Grand i10 vs Mahindra KUV100 Specifications

Maruti Ignis vs Hyundai Grand i10 vs Mahindra KUV100 Design

Design wise all three are quite different from each other. The Maruti Ignis and the Mahindra KUV100 have SUV like looks an tall proportions. The Grand i10 on the other hand looks like a traditional hatchback. The Ignis comes across as the most modern looking of the three. It gets a stylish front grille, with integrated headlamps. The headlamps have LED DRLs. The Side has SUV kind of looks with a thick C pillar. The rear is quite radical looking and is a love it to hate it kind of design. The Hyundai Grand i10 is a facelift of the earlier model. Design wise there is no change as such, but certain new elements make the car look more premium than before. A new set of headlamps, bumper, taillamps and a also new LED DRLs on the bumper add some flair to the car. A new set of alloy wheels also make it look better than before. The Mahindra KUV100 has typical SUV looks. A sleek headlamp and grille design makes it look appealing. Mahindra has updated the 2017 KUV100 with a new two-tone colour scheme , which has a black roof. The looks are enhanced due to this. A new set of alloy wheels are also here and the K8 version now gets 15-inch tyres too, which are bigger than the previous ones. This is the only one that looks more like an SUV when compared to the other two. All three are closely matched here and its a personal choice when it comes to exterior looks.

Maruti Ignis vs Hyundai Grand i10 vs Mahindra KUV100 Interiors The Ignis has funky interiors. They are modern and very stylish with straight lines. It is simple yet trendy. It gets a new steering wheel which is nice to hold. A touchscreen audio with Android Auto and Apple Car Play. There is a reverse camera as well. Bright interiors with colour coded grab handle look attractive.

This is one of the most modern looking cabin with the best in class features. The ivory and black interiors do look trendy and even the plastic quality is one of the best in its class. This is the only one of the lot to offer adjustable front headrests. The Grand i10 has the same interiors as the earlier one. The fit finish is top notch and gives a premium feel. It gets a new touchscreen system which works very well too. The Grand i10 is quite spacious and it also has rear AC vents. The touchscreen even offers Apple CarPlay and Android Auto and reverse camera. At the same time, there is 1 GB of storage space in the system for your music. 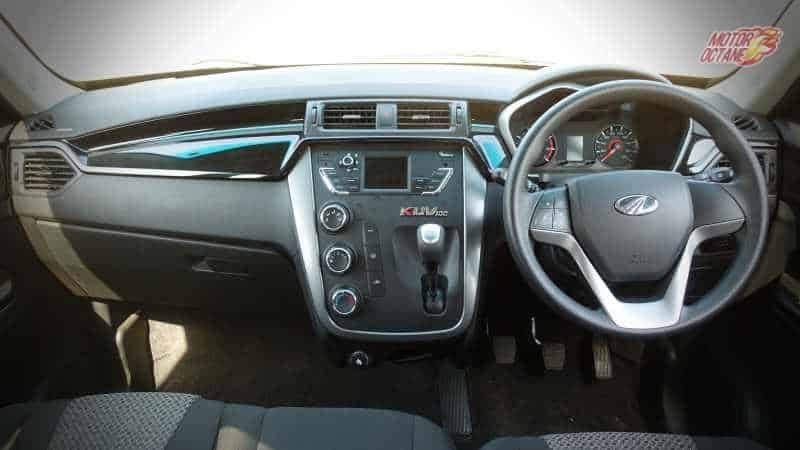 The Mahindra KUV100 gets a new colour theme for the 2017 edition. The black interiors look better than the earlier one. However, it has a long way to go to match the interiors of the Ignis or Grand i10. The fit and finish leaves a lot to be desired and also it has lesser number of features. No touchscreen, no push button start or even a reverse parking sensor. But the KUV100 gets a six seating option. The front row seats can seat 3 persons and the middle seat can fold to transform it into an armrest. There aren’t many features on offer too, when compared to the competition.

The Ignis and Grand i10 are very close in this department. The KUV100 loses out.

Maruti Ignis vs Hyundai Grand i10 vs Mahindra KUV100 Engine

All three vehicle come in petrol and diesel options. The Ignis has a 1.2-litre petrol engine with 82 bhp of power. The diesel is a Fiat-sourced 1.3-litre unit with 74bhp of power. Both have good drivability and are frugal too, being proven engines in other Maruti products.

The Grand i10 has a 1.2-litre petrol engine with 82bhp of power and it is the same as the earlier model. The Grand i10 now gets a new 1.2-litre diesel engine, which is a 3-cylinder unit. This one is impressive and quiet. The NVH levels are good and the engine is refined. It is only while starting or stopping there is a mild shudder, else it is very smooth on the run and has a good spread of torque.

The KUV100 has a 1.2-litre petrol engine churning out 82bhp of power, and the diesel is also a 1.2-litre one with 78bhp. This is a noisy engine and needs more refinement to compete with the other two cars in this comparison. Maruti Ignis has a supple ride, as the suspension has been tuned for comfortable city driving. Driving on bad roads, broken tarmac doesn’t pose a problem as the suspension irons out the bumps. The Ignis does a good enough job in the city. On the highway though, it has good enough stability up to 120 km/hr. The steering feedback is decent and it is light. It is very easy to drive for daily usage. The Grand i10 too has a suspension tuned for comfort. What it gets is a pliant ride, however it does feel unsettled on bad roads. At the same time, the handling is just fine. There is prominent body roll and the hatchback seems to be home more on a straight road or city lanes. The aspect that is strong on the Grand i10 is the steering feedback. It isn’t very light and it has good amount of feedback. The Mahindra KUV100 on the other hand has stiff suspension. With high ground clearance and short wheelbase, the suspension had to be stiffened. It crashes into potholes and it feels harsh on bad roads. The rear seated occupants will find it bumpy on bad roads. The other aspect of the KUV100 has good enough handling for its height. At the same time, the KUV100 has a heavier steering wheel too, which has good feedback, but driving in city could be tiring.

Maruti Ignis vs Hyundai Grand i10 vs Mahindra KUV100 Price The Mahindra KUV100 is a good looking vehicle having immense road presence too. But it could have been much nicer. It falls short in all departments compared to the other two cars here. Be it performance, fit and finish, interior quality and even features. To top it, it is priced equally to the others.

We liked the Maruti Ignis a lot. It looks good, has nice interiors, is feature loaded and also has that oomph factor. The Hyundai Grand i10 now is much more improved with new features like the touchscreen. The new diesel engine which is very refined, is a big step up over the earlier one.  Choosing a winner was a tough task. However, the pricing of the two cars tilts the scale in favour of the Hyundai Grand i10. The top end diesel version of the Grand i10 is a full INR 50,000 cheaper than the Ignis. Hence, the winner is the Hyundai Grand i10.