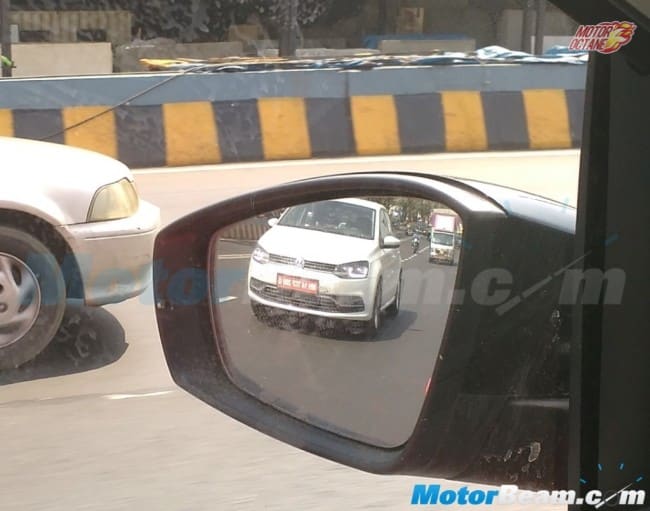 Volkswagen’s next update for the Polo and the Vento will have LEDs. The Polo and Vento both will get daytime running LEDs and it seems that this will even trickle down to the Ameo as well. Volkswagen had recently introduced the Polo and Vento updates with features like touchscreen infotainment system with MirrorLink, cruise control, reverse parking camera, navigation, automatic headlamps and rain sensing wipers as well.

The Polo and Vento will get LEDs in the headlamp. The Vento had been spotted on test previously and now even the Polo has been spotted on test. This is likely to be the Polo model year update for next year. This will again be a minor update and Volkswagen will be launching it in the next six to eight months.

The car which was spotted testing has a new headlamp with integrated LED lights. The headlamps look very similar to the ones on the VW Passat. The Vento has recently got an upgrade, which included changes to the exterior and interior as well, hence the 2016 version will not have any major changes, however the minor changes to this model year car are yet undisclosed. Safety features like dual Airbags and  ABS with EBD will continue. The VW Vento also retains the same engines which are 1.6-litre petrol and 1.5-litre diesel engines mated to a five-speed manual transmission and also a 1.2-litre TSI petrol engine mated to an automatic transmission. The VW Vento had gone more premium with the facelift last year and posed a challenge to the segment leader Honda City, as there were many changes made to make it more luxurious. The Vento had taken on the Hyundai Verna as well. The pricing of the new model is yet unknown and we expect VW to incorporate only the price increase that is meant for its range all across, in 2016. The image of Volkswagen has taken quite a beating after the diesel gate scam globally and the company is trying to sort out the mess and reposition itself strongly once again.