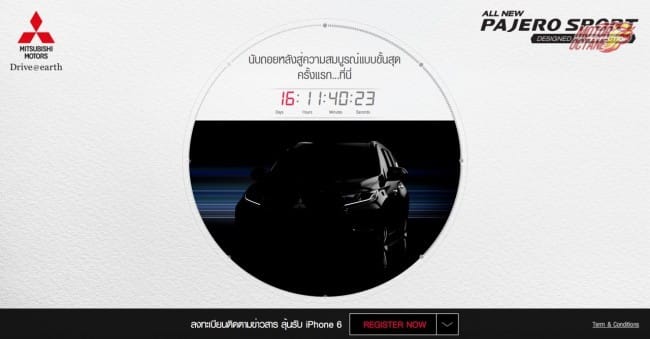 We earlier brought you the clear images of 2016 Mitsubishi Pajero Sport, which would have its world premiere at the 2015 Bangkok International Grand Motor Sale on 1st August. Now, the company has come up with a new microsite of the new SUV, which features a teaser image of the Pajero Sport and confirms the 1st August debut. Just so you know, the 2016 Mitsubishi Pajero Sport would be launched in India in the second half of 2016 by replacing the current model.

The Pajero Sport flaunts the dynamic shield front fascia with slim headlamps, X-shaped grille and LED daytime running lights. Being based on the Triton pick-up truck, it is the second model to feature dynamic shield front fascia. At the rear, there are vertical taillamps, which have no resemblance to the ongoing model. The side profile remains the same as the ongoing model. The range-topping Pajero Sport comes loaded with 17-inch alloy wheels, 8-way adjustable driver’s seat and steering mounted controls. The India-spec model of Pajero Sport would be manufactured at Hindustan Motor Finance Corp’s (HMFCL) Tiruvallur plant in Tamil Nadu by importing CKD kits from Thailand.\

Mechanically, 2016 Mitsubishi Pajero Sport would be powered by an all-new 2.4-litre four-cylinder MIVEC turbo-diesel engine which would churn out a maximum power of 179bhp and peak torque of 430Nm. It would be offered with six-speed manual as well as automatic gearboxes. Also, the new SUV would come in both 2WD and 4WD systems. Mitsubishi India, recently, at the inauguration of a new dealership in Hyderabad stated that it would launch the Outlander and Montero in India in 2016. Currently, the Pajero Sport is the sole company offering in the country. The new SUV would rival the Toyota Fortuner, Ford Endeavour, Chevrolet Trailblazer and Isuzu MU-7, while attracting a price tag of INR 26 lakhs (on-road).