Munna bhai a.k.a Sanjay Dutt loves his garage. When you are done going through or list, not only will you gain more respect for the man’s vast garage but his choices too. His high caliber activating matches his garage immensely. Check it out below, here is all the cars owned by the big ‘Bhai’ of Bollywood- The Q7 is Sanjay Dutt’s personal car. It was brought for him by his wife, Manyata. Sanjay is said to be very fond of the 3.0-litre diesel V6 SUV. The car is practical and bestowed with brilliant dynamics. The Audi Q7 in its previous generation was also owned by Sanjay Dutt. The car is daily driven by him to work

The longest and biggest BMW sold in India is a part of Sanju baba’s collection. The car was apparently brought for the children, his twin son and daughter. Now most people love being chauffeured around in this car but Sanjay can be seen driving the car here himself, which shows he is a keen driver. A car in the past which almost landed him in trouble with his neighbors! Sanjay Dutt loves driving his beast from Marenello around and whipping the big front engine V12 Ferrari. He has been seen driving it around in it many times. The Ghost was a gift to his wife, Manyata on the birth of his twins. The Rolls Royce Ghost is the smallest Rolls you can buy but is still retailed for over Rs 2.5 Cr. The engine is a massive 6.6-litre V12 with over 560bhp and a whopping close to 800 Nm of torque. 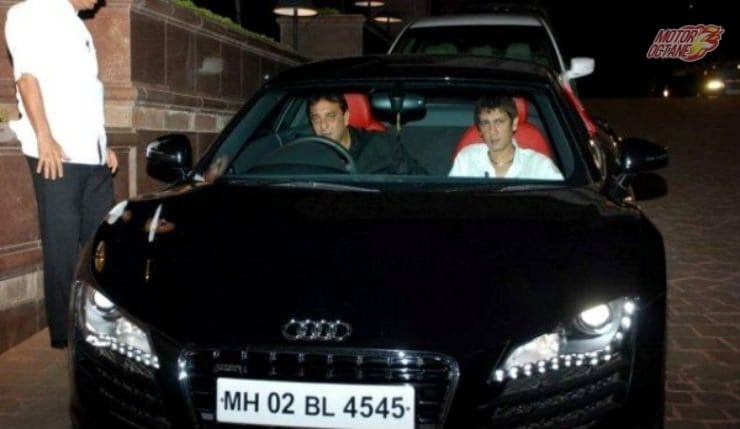 The car that almost became the most sold supercar in India. The mid-engined 4.2-litre V8 R8 in its first generation made it’s way to the superstars garage and might have shared parking with his Ferrari 599 GTB. The current status of the car is not known and it might have been sold. Not often seen as before, the Harley Davidson is one of Sanjay Dutt’s favorites in his garage. There was a time when he commuted to work on the bike and was a regular sight for the neighbours to see him on his blue HD Fatboy. Sanjay Dutt played a small role in the movie Ra.One. The actor did not want to take money for such a small role. Shah Rukh Khan, whose movie it was brought Sanjay Dutt a bike he was eyeing keenly. The Ducati Multistrada 1200.