Honda Africa Twin is quite a popular name across the world. The one we are talking of is the CRF 1000L which carries this popular ‘Africa Twin’ badge. This name became popular in the 80’s after the Honda NXR 750 won the erstwhile Paris-Dakar (Africa) rally, that too 4 times. This Honda Africa Twin has been recently launched as the premium adventure motorcycle scene in India is growing. There are many bikers who want to upgrade and who love adventure touring. While the options for such buyers have been very limited, the Africa Twin brings in something new to the table. What is this all about? Read further in our Honda Africa Twin (CRF 1000L) review.

The Honda Africa Twin is a large motorcycle. It is a full-sized adventure bike and it looks quite imposing. The design is not anywhere near to dull or boring, but is quite an attractive looking bike, especially in red and white colour combination. It catches the eye instantly. There are twin headlamps which are LEDs, housed in a large fairing which has a tall windscreen. The headlamps somewhat remind me of the animated character of King Julien in the movie Madagascar (again an African connection). The handlebar is wide enough and comfortable to hold on to. The instrument pod is a fully digital one and its position is particularly interesting as it faces you directly, making it easy and legible to read. It houses a lot of information right from the speedo, tacho, fuel guage, gear indication and also information such as mileage, distance to empty, in addition to a digital clock and tell tale lamps. The windscreen is not adjustable and that could be not so favourable for tall riders above six feet. 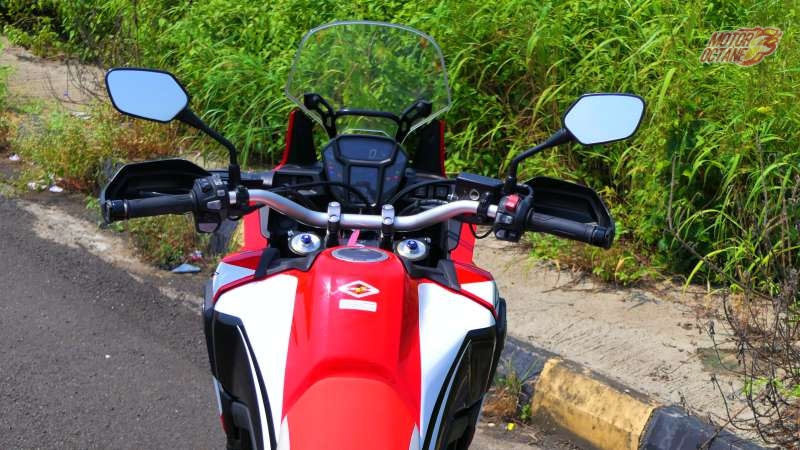 The switchgears on this bike are unique because on the right you will find the gear shifter. Yes, this the unique feature of this bike – a dual clutch automatic transmission (DCT). There is no clutch on the left side and you will find only a parking brake lever, but that is too far away from reach. The tank is well shaped and gels well with the seat, extending well to the rear. The seat in particular is quite high compared to regular standards. It gets two levels of adjustment – 820 mm and 840 mm. I preferred keeping it on the lower side as it suited my height of 5 feet 9 inches better.

The Africa Twin also feels taller due to the large 21-inch front wheel. The rear gets a 18-inch wheel and these are spoked ones, not alloys, which indicate its off- roading traits. The do are dual purpose, more road focused. The seat is comfortable not only for the rider but for the pillion as well. There is a large rear grab rail which also has slots to mount an accessory box.

Honda Africa twin comes with a 1000cc parallel twin engine that produces 87bhp of power at 7500rpm. The torque is 91.9Nm and comes in at low 6000rpm. This bike is not one you should expect for high speed thrill riding, but it is a more usable machine with most of it torque concentrated at lower RPMs. This also helps when riding off-road or climbing rocky paths. 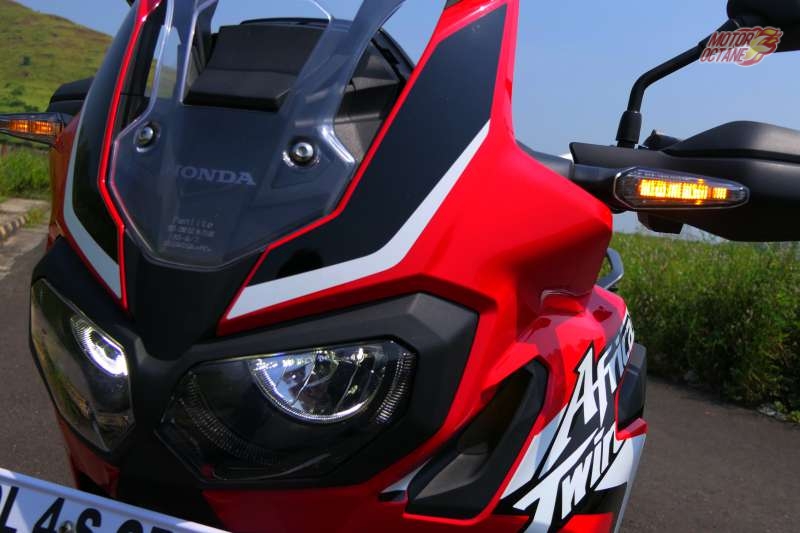 The engine is incredibly smooth and you feel no vibrations even near the 6000rpm mark. The power delivery is also very linear and it offers very strong performance. The engine doesn’t have a refined whine like the three-cylinder Triumph Tiger, but has a good beat to it that also sounds powerful.

I was pretty much excited when Honda had announced a locally assembled Africa Twin for India and that too with a DCT. I also remember spending a considerable time at the Auto Expo observing this bike  and wondering if it makes sense for an adventure bike to have a DCT. Well, now that I have ridden it, I can confidently say that it works amazingly well.

The six-speed dual clutch transmission took me very little while to get used to. Operating this transmission is a smooth affair and the response to throttle inputs is even, free from sudden jerks. Once you fire up the bike, you need to shift the selector on the right to ‘D’ mode and wring the throttle easily to set the bike in motion. However, let me remind you that while you’re waiting at a traffic signal or are stationary elsewhere, just switch-off the bike or select neutral. Else you might sub-consciously try to blip the throttle and the bike may just shoot off! The Honda Africa Twin returned 15km/l in city riding and on the highway it returned close to 20km/l, when ridden at ease. Else 18km/l is what u get on highways usually.

Now, the Africa Twin is an extremely comfortable bike to ride. It reminded me somewhat of the Ducati Multistrada and that’s a compliment! I felt no heaviness on my wrists or forearms, even after riding for 3 to 4 hours, at a stretch. The front wheels as I said are 21-inch ones and provided a good composure to the bike of the bike, especially when you ride on bad roads are going off-roading. 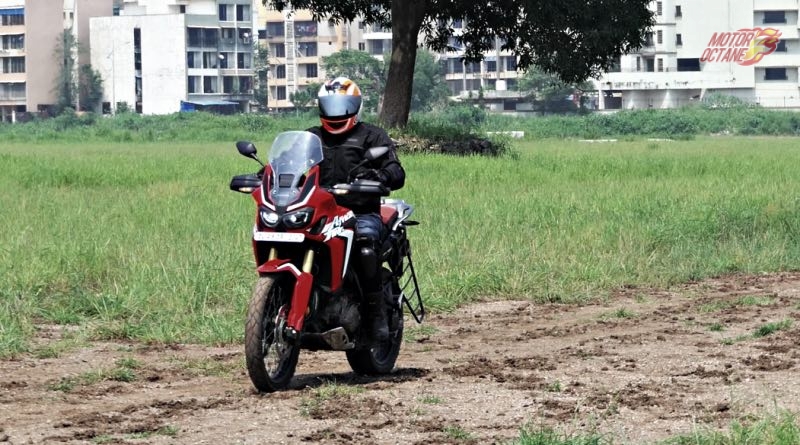 The suspension is quite soft and it will take a while to get used to the enormous pitching while you brake. However, if you want you can adjust the shock absorbers for a stiffer ride.The other advantage of these shock absorbers are the ease with which the bike handles bad roads, potholes and uneven patches. You can just sit on and glide across them.

Frankly I found the Africa twin very well suited to our riding conditions, where most of our city roads are close enough to off-roads. Talking of it, the bike was quite impressive when I tried a hand at some off-roading, though I’m not a very keen off-roader on two wheels. On gravely surfaces the Africa Twin held on pretty well because of the traction control. Once set to the ‘G’ mode, it adjusts itself very well to avoid skidding. You can also switch off the traction control and the ABS. The DCT in fact, helps during off roading as one need not worry too much about shifting gears. Yes it does take a little time getting used to it, but once you do, it is certainly so easy. Climbing some steep rocky paths was easy, however, this is a heavy bike. At 245 kgs it requires a good amount of experience to handle it, specially off-road. I absolutely loved its tight turning radius, which makes it a boon to ride in the city.

Another thing that I noticed was that sometimes the DCT just gets a little confused. I experienced this while riding on the old Mumbai-Pune highway, which has plenty of speed breakers. I generally didn’t need to slow down too much on speed breakers and rather glided over them, standing up. This anyways used to reduce the speed and when I wanted to accelerated suddenly, the DCT would struggle a bit to downshift to the right gear. The good part is that this bike comes with toggle shifts and one can manually intervene as and when required. Once I got used to, it was a breeze.

A big yes, if you are an experienced adventure tourer. The DCT just makes life so simple. But the bike comes with tube tyres, so be prepared to deal with punctures (if any), while riding far off. At around Rs.14.5 lakhs (on-road), it competes with the Ducati Multistrada 950 and some of the Triumph Tiger models. The ease of riding it brings along and Honda’s prowess in motorcycles, not to mention the gearless operation, makes it a compelling buy in this segment. Go for it! 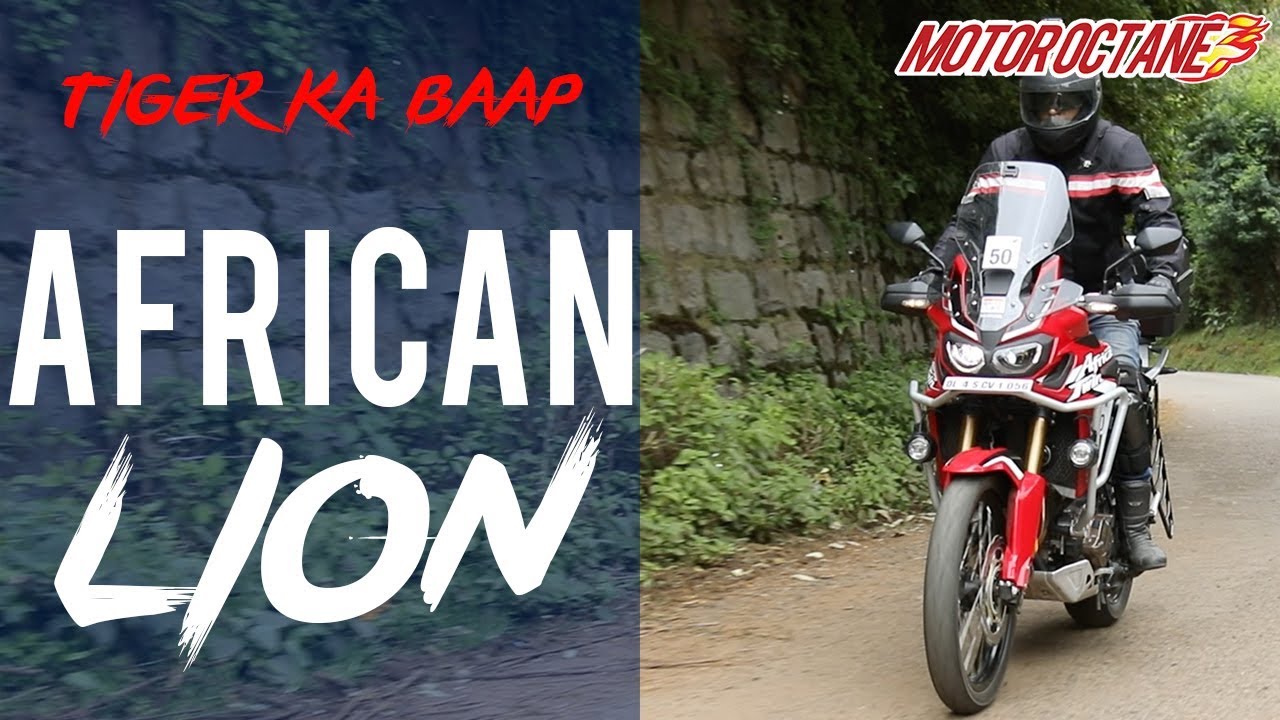