If you want to buy a compact sedan and are mixed up about which one to buy, then this comparison is for you. We compare the best selling compact sedans and tell you which one would be the most suitable for you. Read on the Maruti Dzire vs Tata Tigor vs Hyundai Xcent vs Honda Amaze comparison.

The Honda Amaze is the oldest car in this comparison. This car got an update in 2016, where some tweaks to the exterior and interiors was done. The next car to be updated was the Hyundai Xcent, which got a new front look and some additional features this year. Then came the Tata Tigor, which is a new entrant in this segment. The Tigor comes with fresh styling and challenges the established players here. The latest though is the all-new Maruti Dzire which comes with a host of features and trim levels, based on a new platform altogether.

In terms of exteriors, the Honda Amaze when launched was the most proportionate looking car in the segment. The update in 2016, gave it a new chunky front chrome grille, new headlamps, and a new bumper.It gets 14-inch alloys and is still a good looking car. However, the competition has upped its game further. Hence, the Amaze now looks a bit dated in comparison the others.

The Hyundai Xcent has got a facelift recently, the the front and rear look has been completely changed. The styling is now in adherence to the Fluidic design language of Hyundai and the Xcent looks more a part of the family. A large grille sits at the front, with a new bumper and the tailamps also are new, giving the rear an all new treatment. It also gets new LED DRLs. The Tata Tigor is the new kid here. It comes with a radical styling, that of a sportback, which Tata prefers to call Styleback. This car is more sporty in styling, hence it gets smoked headlamps, stylish tailamps, attractive third brake lamp and a short boot. It gets 15-inch black-machined alloy wheels (diamond cut).All this makes it a very stylish package.

And then it is the best seller of this segment, the Maruti Dzire. The Dzire is a paradigm shift in design from its predecessor. Not only does it look different, but it is also wider and more spacious. It gets a wide chrome grille, sharp looking projector headlamps, LED taillamps, daytime running LEDs, 15-inch diamond cut alloy wheels and the car looks very stylish and premium for sure. It is also very proportionate looking this time, unlike its predecessors.

In terms of design, our pick is the Maruti Dzire and the Tata Tigor. The Honda Amaze has a new dashboard, similar to the Jazz / City. This update was important and has made the interiors much better and more premium. It gets a black and beige theme, with the seats also being biege. However, in comparison to the others, the interior doesnt feel exciting enough, rather boring. The car also has limited features. It doesn’t get a touchscreen, navigation, reverse camera etc. The fit and finish though is good and the seats are supportive. In terms of space, the  Amaze rules. It gets a lot of storage space, making it practical. The rear seats are also comfortable and offer generous knee room and good headroom. Both front and rear head restraints are fixed. The Amaze is narroe so three people will not be very comfortable in it. The boot is of 400 litres and sufficient enough for your needs. The Hyundai Xcent has the same interiors as before. A new 7-inch touchscreen system is on offer. This gets Android Auto, Apple CarPlay, reverse camera and even a mobile docking unit too. Then there is climate control, dual airbags and ABS with EBD on offer too. The front row seats on the XCent has comfortable, however the fixed headrest is a bit small for tall passengers. The rear seats have a good recline and this makes it comfortable for longer journeys. The seating comfort is good and the touch and feel of materials is excellent. 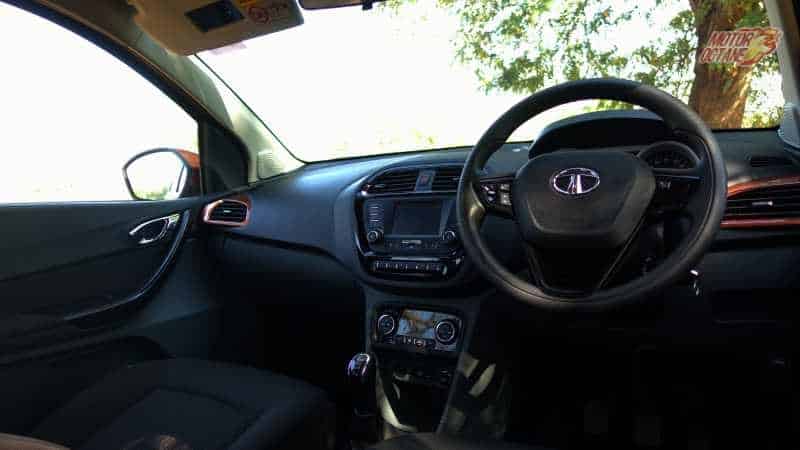 The Tigor gets simple and subtle looking interiors. The interiors have a touchscreen system with Harman music system that play through four speakers and four tweeters. The Tigor has reverse parking camera, Bluetooth connectivity, an app that will have turn by turn navigation on it. The front row seats are comfortable and spacious, while the second row are comfortable with a good amount of recline on it. The boot too is large with 419 litres of space.

The Maruti DZire 2017 has a spacious cabin and this is similar in quality to the current DZire. The instrument panel layout hasn’t changed much on the new DZire. It has an all new steering wheel and instrument cluster. That’s about it. Else, everything else looks the same. In this way, A new touchscreen system with Android Auto, Apple CarPlay and reverse camera is on offer. Dual airbags and ABS with EBD will be offered as a standard feature.

The Amaze gets a 1.2-litre petrol and a 1.5-litre diesel engine. The Honda Amaze petrol produces about 87bhp and 110Nm of peak torque, while the diesel has 98bhp and 200Nm of maximum torque. Both these engines come mated to a five-speed manual transmission and the petrol will also comes with a CVT. Both petrol and diesel have good driveability. If you need performance, then it is the diesel version to go for. The petrol has good performance but the diesel is certainly more powerful.

Hyundai XCent 2017 has a 1.2-litre petrol and 1.2-litre diesel engine on offer. Both come with a five-speed manual and the petrol has a four-speed automatic too. The petrol engine is highly refined and it has very low NVH (noise vibration and harshness). The power delivery is fairly linear and driving in city and even on the highway is comfortable. The diesel engine is a new one and the 1.1-litre is discontinued from the new XCent. What it now offers is good torque, making driveability even better.

Tata Tigor comes with a 1.2-litre petrol engine churning about 84bhp of power and 110Nm of maximum torque. The diesel is a 1.05-litre producing 70bhp of power. Both come with a five-speed manual transmission and there is an AMT also offered on the petrol version. There are multi-driving modes on the Tigor. It is a good car for city use. But for the highway it lacks top end performance.

The Maruti DZire 2017 continues to be powered with the same set of powertrains. A 1.2-litre petrol and 1.3-litre diesel. Both the engines have the same power and torque too. These come along with a five-speed manual and an option of AMT, both in petrol and diesel. The petrol motor is high on refinement, offers amazing power and the ease of driving is its biggest USP. Where the diesel shines is the torque it offers. Maruti has worked on the engine to reduce the turbo lag and the power is linear like a petrol engine.

The Amaze has a decent ride and good handling. The rear is a bit soft, so fast lane changes is not its forte. The steering response is amongst the best and overall the car feels good to drive. The clutch is also pretty light.

Xcent continues to have same ride and handling package as earlier, which is a good thing. The car has a pliant ride and good composure. The seats are well cushioned and the suspension setup is also well balanced.

The Tata Tigor has a very supple ride. It irons out most of the road bumps and it does a fairly good job. The handling too, is one of the best in its segment. Push it around a bend and the hatchback does a good job. The steering wheel is light and still has good enough feedback. This is what makes it stand out. It is a good mix of ride quality and handling characteristics

The Dzire is an all new car, based on an a new platform. This makes it a much improved car over its predecessor.  The lighter body now means that the car feels more nimble to drive and is a boon in the city. It seems Maruti has softened the suspension setup a bit, hence the ride is more supple, but only over smooth roads.  On bad roads the ride is still a bit choppy and on bog potholes, you can feel the suspension bottom up. The Dzire is easy to drive around and take tight U-turns or even parking in tight spaces is not much of a task.

The Honda Amaze is the oldest car in the segment. It offers great space and good comfort. It lacks in features and also looks dated in comparison.

The Tata Tigor is a value for money proposition. So if you are on a tight budget, the tigor should do good justice, It is fairly loaded with features and an amazing audio system too.

If budget is not an issue then the Hyundai Xcent and the Maruti Dzire both are very good products. They will fulfill all your needs when it comes to comfort, space and plushness. The Xcent feels stronger in terms of build. However, if you want some more style quotient and that oomph factor, then it the definitely the Maruti Dzire you should opt for. It surely looks the most exciting and premium out of the lot.