In the last comparison for compact sedans, the Honda Amaze lost badly due to it being the oldest car with the most dated features and design in the fight. And now it’s back for round two and it has come out swinging with a fresh look and has updated itself with a lot of features.

The other two cars here are the Tata Tigor and the Maruti Suzuki Dzire. Previously these cars did well in comparison to the Dzire who was the winner. The Tigor is a highly impressive car with its design and value for money proposition.

In terms of design all three cars are well proportioned and stanced. If explained individually, the cars with the maximum improvement over its older models and generations have been the Maruti Suzuki Dzire. When it was launched it was the not the best looking car that there was but with its practical proportions it was an instant hit. The previous generation did added stylish new headlights and made the horrendous boot a little bit more pleasing to the eye later on. But with the latest Dzire, Maruti has finally got the recipe right. It’s on a whole new platform. It’s bigger, better and most importantly aesthetically pleasing. The projector headlamps, the nicely integrated day-time running LEDs, the side profile with the doors finally looking proportionate to the boot and the front of the car make it look sensibly styled. The 14-inch tyres look great with the new alloys being spot on. Most of the same things can be said about the Tigor with its radical styling. Tata has learned a lot with making compact sedans that did not do as well as they hoped. The Zest and IndigoCS were fine cars but Tigor has the same breath of fresh air as the Manza had when it came to the market. The Tigor with its Styleback rear, the large brake lights integrated with the spoiler on the roof, projector headlamps in the headlights have really made the car look a class apart. The Tigor is a great example of how to improve upon your design and make it better in every way over trial and error from the past. The Tigor get’s 14-inch tyres that are well integrated with five spoke alloy wheels. Now lastly, the latest entrant of this fight, the Honda Amaze. You either like it or you don’t. It looks more distinct than the other cars in its class. It’s not showy. It does not have any creative or beautiful lines like the Tigor or the equalized proportions of the Dzire. The general look that it gives is big and squared off at the edges like an SUV. It will make the car a bit more intimidating at times on the road than the other two. That said it’s got really poor ground clearance. The rear sags badly with a loaded boot and 3 full sized adults in the rear. Also while the other two get projector headlamps, Honda decided to go with conventional lights with the Amaze. It does get neat daytime – running LEDs. The Amaze gets the biggest tyres of the lot at 15-inches. So when it comes to design, the cars from our previous comparison, the Tata Tigor and the Maruti Suzuki Dzire still reign supreme.

When it comes to the inside of these cars, the interior of the Dzire and Amaze have evolved over time. The Tigor on the other hand is brand new to the segment with one year since its launch. So let’s talk about the Tigor. Most cars try and are different or have a contrasting look from the exterior of the car. The interior of the car unlike any in its segment have dual tone interiors with the body color of the car seeping into the cabin in places like the air vents. The car boasts of 24 intelligent utility spaces such as cup holders, bottle holders, bag hooks, coat hooks etc. Most of these are usable too. Coming to the entertainment setup, which is the ConnectNext Infotainment System by Harman. There is a 5-inch touch screen with voice recognition and smart phone integration. The system also provides the rear camera display. And it all comes to life with an 8 speaker setup. What’s not nice about all of this is the 5-inch touch screen. It’s very bad to touch; it’s smaller than the units in the Dzire and Amaze, both of which have 7-inch display screens. There are no rear AC vents provided in the Tigor but as you will experience, the front blowers of the AC unit are strong enough to cool down the whole car quickly enough. The car has 12 volt charging ports at the front and rear. Finally on the comfort end of the Tigor, it does not come on top of its rivals in this comparison completely. While in our test we found out that the Tigor had a very lovely ride and potholes and bad roads did not upset rear passengers, the space really did. There was not enough space for three passengers to sit comfortably in the rear seats. While the bolstering and head room on the car is great, knee room is a bit short. The general touch and feel of materials is good and better than previous Tata vehicles. There are no rough edges or parts that look or feel unfinished. We should add that the only bit that showed quality problems was the chrome that had worn of the rear door handle. To end things positively for the Tigor, it has the largest usable boot in this class. At 419 liters it’s only one liter less than the Amaze. But with the multi-hinge setting and a smaller mouth, the Tigor will gulp up more stuff than any other car here.

With the Tigor done, let’s now move to the big dogs of the pack, the Dzire and the Amaze. Firstly, the Dzire’s beige and faux wood interior is really plush and feels rich. But is bound get very dirty. The Amaze on the other hand has a dark piano finish with the grey color scheme applied to the seats as well. The touch and feel of the materials and There is plenty of storage space in both the cars with the exception of the Dzire’s glove box being really tiny. All the doors on both cars can easily accommodate 1 liter bottles. While the Amaze does not get rear AC vents, the Dzire on the other hand does not get a feature like Cruise Control which the Amaze is the only one in this segment to get. And when it comes to comfort the Amaze is 40mm narrower than the Dzire but seats three people more comfortably. With no AC vents at the back of the Amaze, the middle seat passenger is also very comfortable. The infotainment setup and the display unit in the Amaze is the Digipad 2.0. With its floating design this looks way better than the Dzire’s SmartPlay unit. The Dzire does have two more speakers but the overall quality of the Amazes’ speakers is better.

In our last comparison, the Amaze suffered really badly in the interior department because it was outclassed and out styled by the newer Dzire at the time. But Honda has done its home work and showed us how well it can manage space in the sub-four meter class. Features like Apple CarPlay and Android Auto, Automatic climate control, push start stop, cruise control and paddle shifters have made it a rival that the Dzire in some areas is not equipped to take on. Also to add here, the Dzire has 378 liters of boot space that is lesser than the Amazes’ 420 liters. 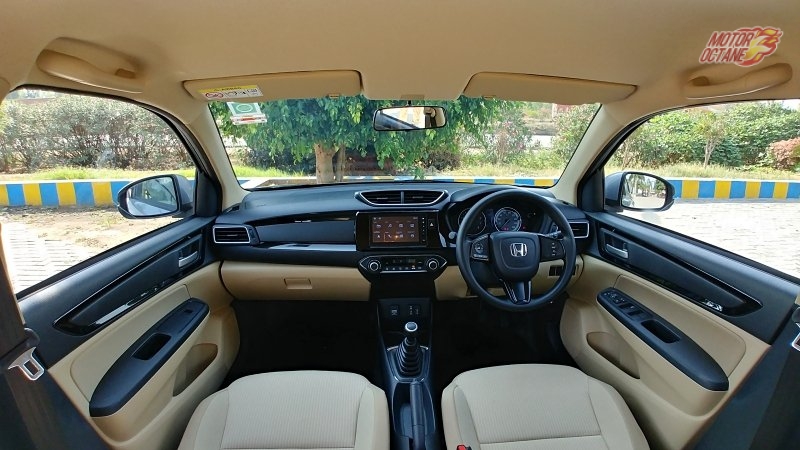 Now when it comes to vehicle dynamics, comfort while driving and handling of these cars, let’s quickly star with the baby of the bunch, Tigor. The Tigor has two three-cylinder engine options, the 1.2-litre petrol and the 1.05-litre diesel. Both are mated to a five-speed manual gearbox. Out of both these options the one we would go for is the petrol. The Tigor is very not sporty or a car that you would like to ask a lot in terms of handling. It’s got a very good ride. The suspension is very forgiving in the pothole ridden streets of our cities. We would advise you to use the City driving mode at all times as it’s has the punchiest setting and with the car getting great mileage of like 15km/l to 18km/l you do not need to worry about burning precious petrol. With the petrol variant of the Tigor you get 15-inch wheels.

Now let’s talk about the Dzire, the second highest selling car in the country right now. The Dzire carries forward the 1.2-litre K-Series petrol motor and the 1.3-litre DDiS diesel. While the older Dzire featured an AMT with the diesel and the petrol got a prehistoric torque convertor, the new one gets the AMT option for both engines. Power figures remain unchanged when compared to the previous generation, with 84bhp/114Nm (petrol) and 74bhp/190Nm (diesel). The petrol motor is known for its refinement and peppiness, whereas the diesel engine makes for a great commuter with some extra punch for the highways. The Dzire with its petrol engine gives a good mileage of 13km/l -15km/l and the diesel is the best with 18km/l to 22km/l on the highway.

The Dzire is brilliant to drive in all its avatars. The Maruti Suzuki Swift secret sauce shows its flavor here and there whenever you are on twisty roads with the pedal to the floor. There is no unexpected roll that sets in once you turn the car around the corner. The rear keeps itself taut as you accelerate away on a straight bit of the road. The seats which are the same as in the Swift do the job of keeping the driver in place really well. The ride on the car is not as great as the Tigor but it is not even bad at the same time.

And finally we come to the Honda Amaze, with its brilliant 1.2-litre i-VTEC petrol and 1.5-litre i-DTEC engines both serving different purposes very well. There is an option of a five-speed manual and a CVT on both the engines. The CVT option with the diesel is the one to go for. While the petrol is the engine that looks formidable on paper, the diesel engine with its torque bursting in at as low as 1700rpm gives the Amaze a power packed drive. In the corners the brick like shape does not affect handling much. It is not as fun as the Dzire but it’s not less sure footed. Even though it’s low the Amaze gives the driver a sensation of driving a big car because of its huge front end. The two problems that I did face with its drive were its low ground clearance and lack of responsive brakes. The brakes do bring the car to an immediate halt, but do not have the same bite as the Dzire or Tigor. The Amaze has a similar mileage of the Amaze with the petrol engine giving a good mileage of 13km/l -15km/l and the diesel returning 18km/l in the city and up to 22km/l on the highway. The winner for this comparison is the 2018 Honda Amaze. Honda is back with a bang and has made the compact sedan segment more fun than ever.