Out of all the Royal Enfields I have written about, this was one I was looking forward the most. This was the bike that put RE on the map and Bullet also became a brand in its own. Whenever you address a Royal Enfield bike these days, it is always the RE Classic 500 or RE Thunderbird 500. But in all of my years of existence I have not heard a single person say that he has a RE Bullet 500. It was always just the Bullet 500.

The Bullet 1st came to India in 1955 but was then completely manufactured in India from 1962. The Indian government looked for a suitable motorcycle for the police and army to patrol the borders. And they found the Bullet as a suitable bike. That is how the early 350 came into production. The 1st 500 was stopped in 1961 to make way for the more efficient 350 and now the 500 was reintroduced later, in the 90’s. In 2013 an upgraded version was relaunched. o let us have look at what the new Royal Enfield Bullet 500 has to offer. To keep in touch with the tradition unlike the other 500 cc bikes in RE stable which have fuel injection units, the Bullet 500 still has a carburetor.

Besides Chandigarh, everyone else is paying a hefty some of INR 1.80+ lakhs for the Bullet 500. That is a good premium amount that RE are asking for. It is facing stiff competition from the like of the UM Renegade.

With a top speed at 110 km/h it is a decent speed for city commute as current 100 cc bikes do just 15 km/h less. In all my years, I can never figure out what RE are doing with such a large engine which is not being able to perform.

This is a heavy bike at 193 kgs. RE are loud proclaimers that they use metal for most of the body parts. The engine goes without saying. The 135 ground clearance is extremely low but the stiffer suspension makes up for it and the bike almost always does not bottom out.

This design has remained the same for over five decades. Now that is a really long time. The only other design that comes close to being this old is the Mercedes G-Wagon and still sells with a lot of demand. The slightly front stretched forks and mud guards that cover almost half the circumference of the wheels give a rugged and robust look.  The Pan-Head styled headlamps with pilot lamps on either side. Typical old-school teardrop style fuel tank.

The Bullet 500 comes with an old school seat that has remained same and why now, it is still comfortable. 1950s style toolboxes is again old school charm. There is a lot of chrome too. The mirrors are round which is again a classic design which is chrome along with the long exhaust and gearbox casing which is also chrome. The headlamp is cover with a chrome ring too.

The Bullet 500 now has some new paint jobs to its list.

Yes there is a black and in a rare occasion, the black is the traditional colour that the Bullet used to come in for the past many years.

It is strange that being a 500cc bike it lacks performance. The strange part is RE’s 500cc FI engine performance is not upto the mark for a 500cc but is far superior than the Bullet 500. Even 0-100 there is a 3.5 sec difference. All the difference is in the technology.  The long 90 mm stroke is the major reason for people to buy the Bullet 500 and the thump.

Well one thing is good that despite the displacement of the engine the Bullet 500 still manages a 30 km/l which is an excellent figure. And by considering the 13.5 litre tank it can do an easy 380 km before the next fuel stop. No wonder tourers love the Bullet 500. It is one of the most comfortable bikes to ride if you can deal with the vibrations. 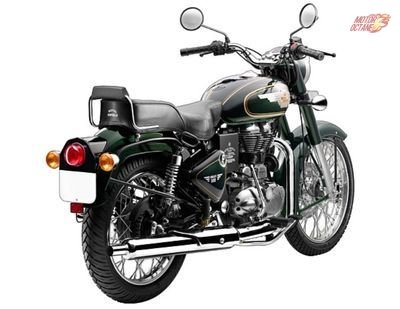 With a weight lighter than 200 kgs, longer wheelbase and lower ground clearance leading to a low centre of gravity, the bike is very stable even in triple digit speeds. maneuvering in traffic is easy despite the 193 kgs.  I have seen people toss this bike around as if they are riding a small size commuter. There was one glitch in the gears while shiting. There is a lot of play in the gear lever and the shift sometimes tends to get stuck between 3rd and 4th gear.

The only saving grace is that the shifts are less. The wide but straight handlebars are easy to reach for shorthand riders like me and the low centre of gravity is a blessing. And as always I repeat it again, I wish RE provided better tyres. At least provide tubeless tyres. Pushing this mammoth around incase of a flat tyre isn’t an easy task. Even with the BS4 norms RE charges a premium and still missed out on basic safety features like rear disc brakes and abs.

With other brands offering so much more at this price range all Royal Enfield has to offer is the thump and the heritage. It is high time they get out of the history mode with the Bullet 500 and focus on the future.