The name Innova is synonymous with utility vehicles in India. The completion has never managed to come close to the Innova in terms of sales and popularity. Tata had tried to challenge the Innova with the Aria, however it did not achieve much success. The new Toyota Innova Crysta came as a new generation vehicle and offers more options, better features and space. Tata too has upped its game and had launched the Hexa. The Tata Hexa competes squarely with the Toyota Innova Crysta. Both the MUVs offer good features, are spacious and also high on utility. They both also offer an automatic transmission. Both vehicles set a new benchmark in this segment in terms of looks, styling and features. Let’s see the Tata Hexa vs Toyota Innova Crysta comparison.

The Toyota Innova Crysta is priced between INR 16.84 lakhs and INR 25.04 lakhs (on-road, Delhi). The Hexa costs between 14.21 lakhs and INR 20.66 lakhs (0n-road, Delhi). There is a major difference in the top model pricing, but what you get are even more features on the Innova Crysta when compared to the Hexa. At the same time, the Toyota Innova even has a lower automatic trim that is offered at a more affordable price. At this price point, the mid-model of the Innova Crysta automatic is a good option to consider. The Hexa looks fresh in terms of design. The underpinnings are of the Aria, however, the treatment to this crossover is completely new. The front and rear is completely new. The Hexa is stylish and easily one of the best looking crossovers around. It stands our and looks much better and more balanced than that Innova Crysta. The Innova Crysta is an all-new vehicle and is bigger than the earlier Innova. It looks premium and also has an aggressive looking front end. It gets SUV kind of looks, which makes it more appealing than before. Both vehicles are build on a ladder frame chassis and both look premium too. They both come with projector headlamps. The Innova Crysta has 17-inch wheels whereas the top end Hexa gets 19-inch wheels. In terms of design and looks both are almost at par, but the Hexa looks more proportionate. The Toyota Innova has set a benchmark in interiors in the MUV segment. The quality of materials is right up there and the layout of the cabin and dashboard is something unseen in this segment. The Hexa also offers a cabin with a very premium feel. the fit and finish is also very good. However, it gets a small instrument panel which is not so easy to read. The touchscreen of the Hexa is also very basic. The Innova Crysta edges past the Hexa in terms of layout and features. It additionally gets a large multi-information display for the driver on the instrument console and also has ambient light in the cabin along with tray tables for rear passengers. 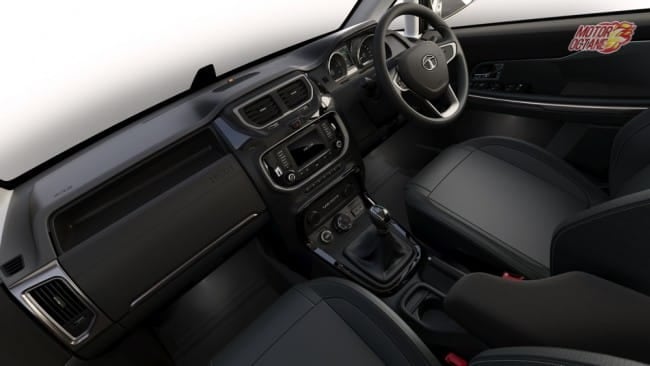 The Hexa interiors are not as flashy as the Innova Crysta but feels premium and is quite feature loaded too. Where the Hexa beats the Innova Crysta is in the audio system as it gets a 10-speaker Harman audio system. This system is by far the best in the segment. The Hexa dashboard is old-school and very basic in styling. The instrument cluster does seem a bit difficult to read with small numbers and the centre driver display is very basic. 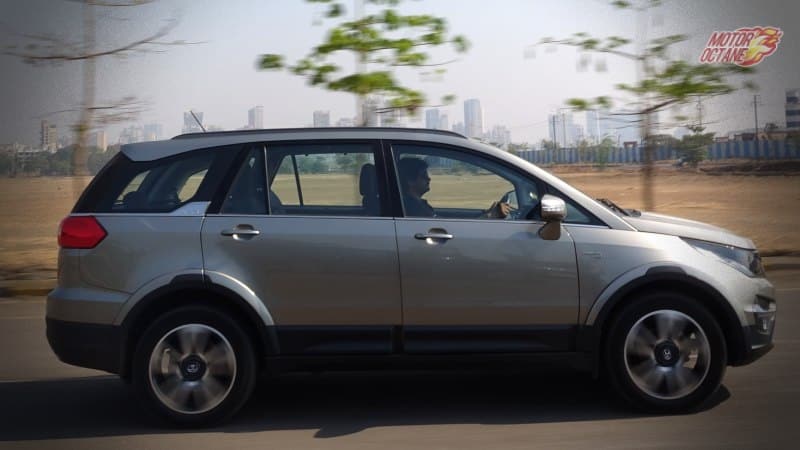 Tata vehicles have always offered a good ride and the Hexa is their best yet. The Innova also has a very pliant ride and manages well on bad roads but it just cannot match the Hexa in this department. The Hexa ride is phenomenal and so is the high speed poise. The Innova Crysta is a much improved vehicle in terms of handling now as there is minimum pitch and roll. The Hexa too has very good handling, specially with the 19-inch wheels. Both vehicles feel heavy in the city though, specially at parking speeds.

On the other hand, the Innova Crysta doesn’t have that well-settled ride. There is some amount of body roll too in the Innova. If you need a driver’s car, amongst Tata Hexa vs Toyota Innova Crysta, the Hexa should clearly be your choice. It is indeed a lot of fun over the Innova.

The automatic in the Hexa returns about 11 km/l and the diesel manual about 12 km/l in a mix of city and highway conditions. The Innova Crysta has a fuel efficiency of about 9-11 km/l for the automatic and around to 12-14km/l on the manual. These figures are in  real world driving conditions and may vary as per driving habits. The Tata Hexa is a well rounded package and a decent buy at this price. However, if we talk about luxury, sophistication, premium feel and brand value, which includes resale value, then the Toyota Innova Crysta is the clear winner and the best bet. The Hexa is very well built. It feels tough and also one which can give years of reliable service. If you need one to drive for a daily basis and you are looking for the fun factor, then the Hexa should be your default choice. The Hexa also is the more economical of the two. For those looking at relaxed driving, the Innova Crysta will be the ideal pick.