Maruti Vitara Brezza vs Ford Ecosport vs Mahindra TUV300 comparison is something all our readers have been asking for. Which one should you buy and why? Read our as we do a detailed analysis of the three compact SUVs in this segment. Only one winner will emerge of the lot.

All the three compact SUVs follow different design languages. The Vitara Brezza makes a presence for itself. This compact SUV gets a thick chrome slat grille that runs across. The headlamps meld well with the grille and this adds to the styling. The headlamps have bull horn shaped LEDs and then there are round fog lamps as well.

The Ecosport on the other hand looks sleek. This compact SUV has a slim front grille with the lower grille having hexagonal design. The Ecosport’s headlamp now houses the daytime running LEDs.This is a new feature added to the compact SUV. The side profile of this compact SUV looks more closer to a crossover.

Mahindra has designed the TUV300 with the idea of making something look as tough as a tank. The TUV300 design is boxy for that reason. It has the seven vertical slats on its front grille with squarish headlamp and fog lamps too. The side profile looks boxy with metal area being a lot more than the glass area.

Winner: It is difficult to say much about the looks of SUVs, as design is subjective. Our personal pick is the Maruti Vitara Brezza.

Maruti’s Vitara Brezza has an all new interior design. This doesn’t resemble any other Marutis from the inside. The black interiors looks sporty, however the plastic quality could have been a bit better. The fit and finish of the materials is good. The centre console consists of two AC vents, a touchscreen system with maps, reverse parking camera and then climate control air-con. The touchscreen system is available only on the ZDi+ variant itself.

There are dual glove boxes, with the upper glovebox being cooled one. This is available again only on the ZDi+ variant only. There is sufficient storage space.

Ford’s Ecosport’s interiors are more like a cockpit. It comes with too many buttons, knobs and controls which can get a bit confusing. The plastic quality of the materials used is good, however the feel of the plastic is a bit coarse. The black interiors with a silver centre console might not look very appealing to all.

Winner: It was a bit difficult for us to decide the winner, as Ecosport and Vitara Brezza finish close. One pick has to be the Vitara Brezza.

The Vitara Brezza has sufficient torque and one of the strongest aspects of this compact SUV is its drivability. The ease of driving in city or even the highway without having to change gears that often. The Vitara Brezza comes only with a diesel engine and there is no AMT on offer. The drivability and even the outright performance of the Ecosport is the best in this segment. Ford has built a clear winner diesel engine for this segment. Whats more, two more petrol engines are on offer.  Ford is the only one that is offering petrol and an option of fully automatic engine as well. The drivability of this engine is also good. One doesn’t need to shift gears that often. But then it misses out on the punch that we look out in a diesel engine. It does feel a bit out of power above 3500rpm. This is offered with a five-speed manual and AMT. The tall gear lever makes it feel notchy and rubbery. Winner: There are no second thoughts on this, Ecosport is the clear winner in this department. More engines and transmissions on offer and even most powerful engines.

This is one of the best crucial aspects. The Vitara Brezza with an ARAI mileage of 24.3km/l. We haven’t done a mileage run but with our experience with this engine, it should return about 16km/l in the city, while on the highway it would be about 19km/l. Winner: Maruti Vitara Brezza is the winner for this segment.

Ecosport retains Ford’s DNA of having good driving dynamics. The ride quality is a bit stiff on the Ecosport and this has been done to improve its handling prowess. The Ecosport is the best handling compact SUV in its segment. The light steering wheel is convenient and whats more important is the feedback. This has good feedback too. Driving the Ford Ecosport is such a joy. TUV300 is heavy and not the best in handling.

The TUV300 excels is the option of seven seats, the choice of an AMT and even tough looks and even built on a ladder frame. The TUV300 manual is about 2 lakhs cheaper than the competition and this makes it a very good  value for money vehicle, especially if you are low on budget. All three finish very close, but our pick is the Maruti Vitara Brezza. 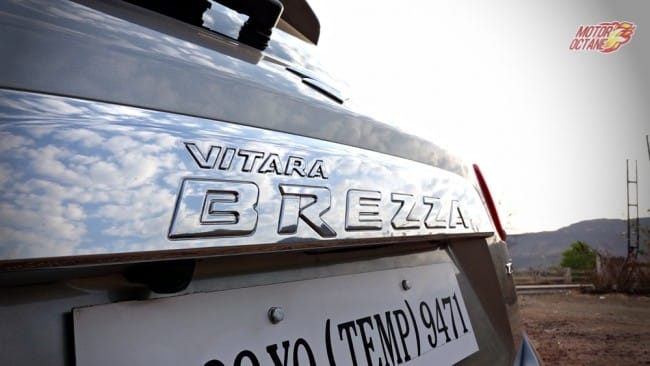 If you are looking at buying one of the three SUVs or any other, leave your contact details and do not forget to mention your car/bike model, telephone number and city.