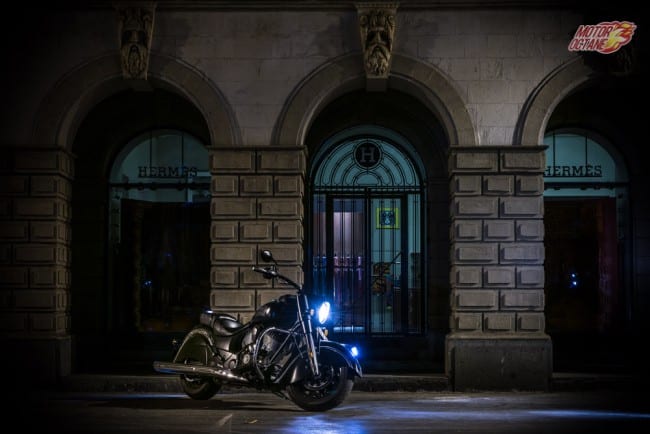 As I have mentioned in my past reviews, when Polaris got a hold of the Indian Motorcycle Company, they put in a lot of effort to revive this age old brand. I love Indian bikes, it’s as simple as that! For a cruiser, there is nothing better than having a lit up War Bonnet leading the way and a thumping Thunderstroke 111 creating the soundtrack.

Those of us familiar with Indian Motorcycles, know that the Chief is their most well known stallion. It holds true to it’s pedigree with it’s design and makes every neck turn as you ride by. The Chief comes in two styles, the Chief Classic – Chrome engine, Chrome exhausts, Chrome handle bars and a lot more of chrome apart from the solid coloured tank and fenders, and the Chief Vintage – just the same as the Classic but with a windshield and saddle bags. Well, now Indian motorcycles has blacked out the Chief and let it’s Black Beauty gallop free in this world, giving it the name of  Indian Chief Dark Horse.

Well as the name suggests, the Dark Horse is just a blackened version of the Chief to put things blatantly into perspective.  What the Indian Motorcycle Company (IMC) have done is gotten rid of all the chrome on the bike and sandblasted it black, except for some bits to add the appeal to this bike, like the exhaust and the chrome lip on the front fender. All the features that made the Classic a winner have been retained. The large teardrop shaped tank houses the speedometer which has an inbuilt screen giving the rider various information, such as RPM, distance to empty, trip meter and the standard odometer.  On the side on the tank in subtle are is the Indian insignia of the Chief’s head the word “Indian” written across it. The leather accents adds a different look to the tank and at the same time prevents the tank from getting scratched up by the rider’s belt etc. Like all Indian’s the key works on proximity. Keep in your pocket and hit the power button on the tank, the first thing that lights up is the war bonnet. That is some class! Hit the power switch on the handle bar and the enormous 49 degree, 1811cc V-Twin Thunderstroke 111 engine burbles to life.  At a stand still, a twist on the throttle makes the bike roar like the God of Thunder Himself but while riding the sound clearly reminds one of horses galloping pulling a cart behind them. The engine produces 110hp and 140 Nm of earth moving torque. Weighing in at about 400kgs dry, one would expect the Dark Horse to be lazy and cumbersome, but no, do not let that weight fool you in any way. The Dark Horse can hit a 100km/h is less than eight seconds and can cruise easily at speeds over 140km/h. Ideally though, this bike sits most balanced between 120-140km/h in sixth gear. Cornering is simple, the bike just falls into easy turns but hairpins and U-turns can be quite tricky for those not used to the bike’s size or weight. The black stallion comes with a smooth shifting six speed gearbox. It is quite clunky and one does need a good left foot to shift up and down the gears but the bike can pull the driver along in any gear with a simple twist of the throttle. Power, like in all Indian’s, is always on tap and is delivered to the rear wheel via a belt-driven system. Seat position on the motorcycle is comfortable and relaxed. One can ride this bike for miles, just stopping to relieve themselves and then hop on again. It’s meant to be ridden on the open road.  Potholes seem to be nothing for this bike but on some speed breakers in this country, the low slung stance of the bike does call for some scraping of the underbelly. The cruise control system is easy to use and works comfortably in sixth gear, but I don’t really see too many opportunities for rider’s to use that function here. Dark Horsemen ride solo. If requested, the IMC can fit an extra seat on the bike so that a pillion rider can tag along. Apart from adding an extra seat, the Dark Horse is one of the most customisable cruisers in the Indian stable. One can add Ape hanger handlebars, black leather saddle bags, leather frills, seat backrests and various sorts of other accessories for the bike. Indian wants this bike to be completely rider centric. 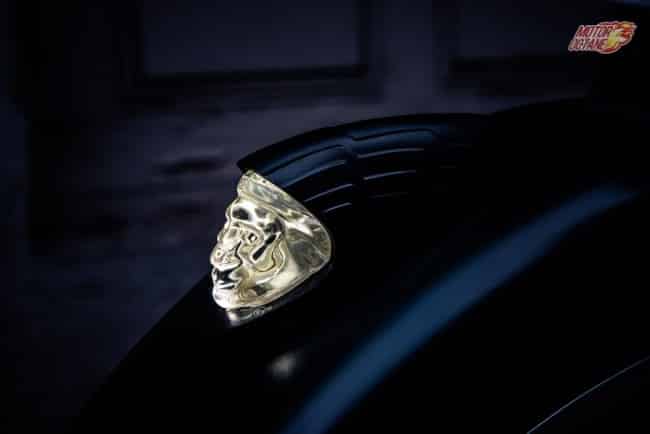 The Dark Horse is a perfect combination of beauty and power and a perfect example of how the vintage has melded with the modern. At approximately INR 23 Lakhs on road, the Dark Horse is still an expensive bike, but it is cheaper than the Chief Classic. For this price one end’s up getting one of the best looking cruisers made till date, an insanely powerful engine, ABS, cruise control, keyless go,a whole lot of ogling and probably quite a few chickas digits.