My school uniform was a white shirt accompanied with white trousers, white socks, a navy tie and black shoes. Considering I went to a private school, the “style”as you’d call it was – formal. The only thing missing was a blazer and I swear we would have looked like mini ticket collectors, so I’m glad we didn’t have one. Not to mention in the city of Mumbai with the heat and rain a blazer would have been completely unreasonable.

In the fifth grade we were allowed to use pens. which meant that nearly every kid in school got a fountain pen. Hero pens were the most common, Parkers came next and the two or three privileged kids had Shaeffers.

On my first day in the fifth, as I was leaving home to catch the school bus, my father stopped me and gave me a long box. He said, “Open it.” With utter curiosity I opened the box and in it was a black and gold, slender pen with a “W” insignia on it’s clip. It was a “Waterman.” At that age I didn’t know what it meant to own a Waterman pen, I don’t think it any kid would know. All I knew was that I had a pen that no one in my class had. That was what made it stand out. It was the sole Waterman in the grade. I never really told too many people about it, but it was just great having that feeling that I had something no one around me did.

As time went by, I went over to the USA for higher education, I found that all these pens are relative. A Gold Plated Shaeffer is more unique than a black lamina Waterman. I mean there is always competition and choice when it comes to everything materialistic. You can’t really differentiate one from another. Each have their own style and class.

This very casually brings me to the subject that I should actually be talking about. The Land Rover Range Rover Sport SVR. Damn! That’s a long name! To introduce it to you, without any fancy language and in plain simple terms – take a Range Rover Sport, throw in 5.0L supercharged V8, pack on a loud exhaust and a beautiful paint job and walk, thats the SVR.

You must be wondering what SVR stands for, well, SVO to Jaguar-Land Rover is like AMG to Mercedes-Benz or M to BMW. It stands for “Special Vehicle Operations,” and R for Race. Quite a fancy name if you ask me. 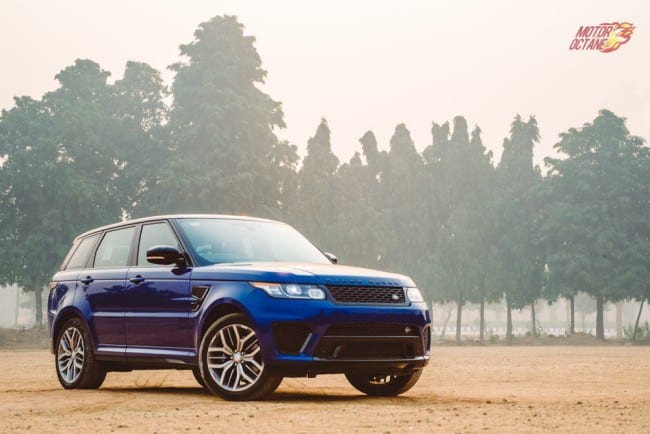 But there is more to it that that. On face-value thats what it seems like, but there are many things that separate this from the sea of Range Rover Sports floating around the country.  First of, it is the fastest and loudest performance SUV ever built. This is one car that you can set a good lap time with and then once done decide to scale the mountain to catch the sunset over the track. It’s a proper Range Rover.

It looks the same as a Range Rover Sport apart from the the front grille and the exhausts. The SVR gets a black honeycomb grille upfront and four exhaust tips in the rear. Apart from that it’s pretty much the same on the outside. The interior is typical Range Rover. Filled with the maximum luxury Land Rover can offer. The seats are plush and the inside is very quiet. The SVR even gets a mini-fridge in the centre console. The dual toned leather adds to the sporty appeal of the car. This is the top of the line model when it comes to the Range Rover Sport so i am not even going to mention all the comfort features it comes with. It has everything one can ask for. 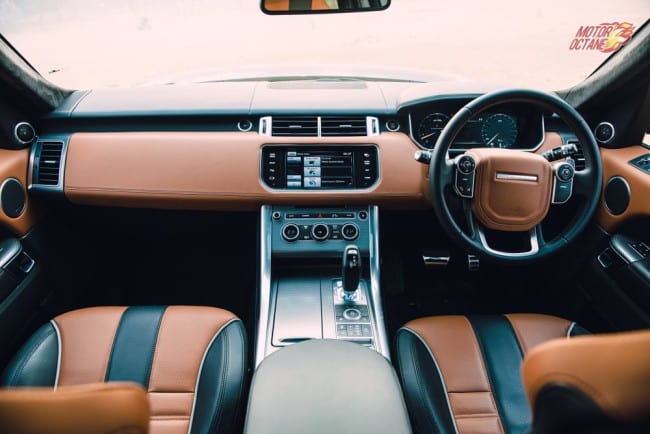 Under the hood is a 5.0L supercharged V8 motor borrowed from a Jaguar F-type and modified to put out 541bhp and 680Nm of torque. This beast weighs in at 2335kgs and hence needs that power to fly around corners. 0-100km/hr times according to Land Rover is 4.7s but I tried at least six times and the closest I got was 5.1 seconds. has to be because of the shitty fuel we get here. Still 5.1s is not a bad number at all! That is incredibly fast for a big car like this. To be completely frank with you, the SVR LOVES corners. Yes there is quite a bit of body roll as this a tall SUV and the passengers do get tossed about a bit but still as a driver’s car it handles beautifully. The nutters at SVO have played with the Sport suspension and made it stiffer that allows the car to corner pretty cleanly. The Corner Sensors in “Dynamic” mode send corners and hold in the gears longer allowing for high speeds around corners. With all wheel drive this hulk doesn’t show any signs of slipping ever! 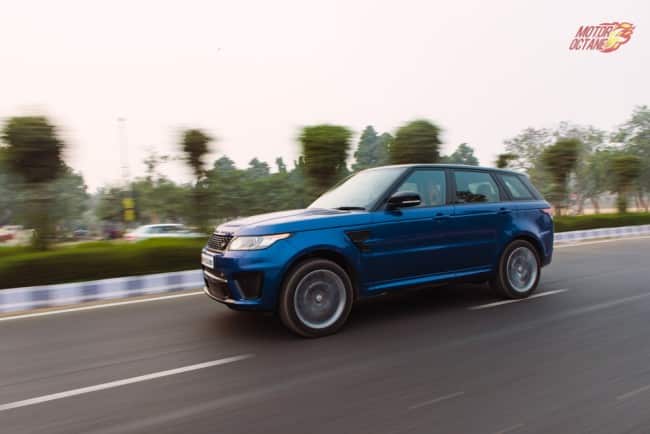 Though the SVR is bred for the track, it is and will always be a Range Rover. Which means off-roading is in it’s blood and DNA. The SVR like the Range Rover Autobiography gets the Terrain Response II which has an “Auto” detection setting that allows the car to respond after sensing the terrain it is in. This car gets an extra setting that it’s big brother doesn’t, which is “Dynamic” mode. This turns the car into a track ready monster capable of scaring any hypercard owner. Remember though, the SVR is huge so you really do feel the speed in this thing. Even doing a measly 140km/h, it felt as though I was doing 200km/h. It’s always good to be careful with so much power on tap. The new transmission, 8 speeds and better low end torque make this fun to drive in the city as well. Just be sure not to switch over to “S” on the lever, that will make the car jerk forward overtime you go close to the throttle.

Power delivery is pretty much instantaneous. Hit the gas and this thing wakes up ready to move faster and faster. Turn the active exhaust button on and this car will roar like a lion, snort like a bear and pop like a gun. This makes it sound alive! When you are done being an ass, all you have to do is turn off the button and the SVR turns into a poised cruiser again. Go above 4000rpm and the valves open up letting the demon out of the pipes again. Don’t bother asking about the fuel consumption. With a 105L tank the SVR should be able to go forever but drive it hard and you’ll be emptying your wallet nearly every 200kms, but if you are to buy this then gas is not something you will worry about too much. Let me bring you back to the beginning of this review. What did I mean when I said that it felt great owning something different than the rest? Well in this day and age, where people have a high spending potential and capability, nearly everyone seems to be wanting to buy a luxury SUV. The Range Rover Sport has always been a people’s favourite. Mainly because it looks great and because it can genuinely off-road. What if you want to own a Range Rover but not the Sport that many people have or even the big Range Rover that may seem a little too luxurious, then what is the choice you have? Well it’s this, the SVR. At and approximate INR of 2.4Cr the Land Rover Range Rover Sport SVR is a menace than will make heads turn and put a smile on your fave overtime you take it out for a spin. What you get at that price is an all in one vehicle. Take it to work every day. Switch over to Dynamic and bomb around the track making BMW and Mercedes owner’s eye pop at your lap times and then over the weekend take it through the mud and rocks to your getaway and enjoy the night sky through its humungous panoramic sunroof.