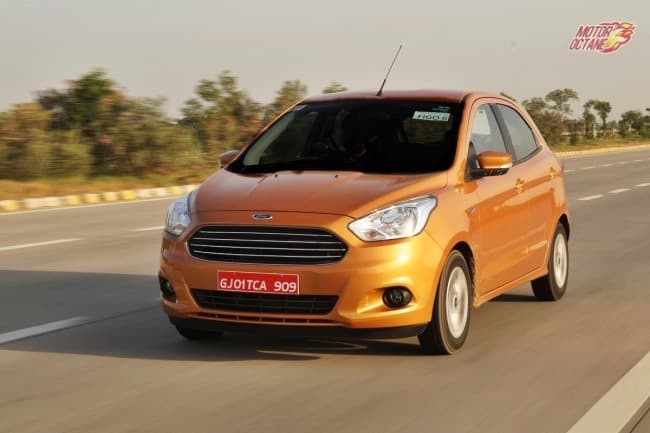 Ford Figo has been the most successful brand by Ford in India. The Figo proved to be great value for money and it was a well built car too. The all new Ford Figo 2017 was launched sometime back, which is bigger, better and even more feature packed than the earlier Figo. It even looks very premium. How good is the Ford Figo 2017 ? How does it perform? Is it value for your money? Read on for our detailed review. The Ford Figo 2017 does not share anything with the earlier model and is an all new car. It is based on Ford’s Kinetic design 2.0 language and the theme is identical to other new generation cars from Ford.  A robust passenger cage made from high strength steel is a part of it. The Ford Figo 2017 also offers driver-side airbag as standard, across all variants. Ford has given a lot of emphasis on passenger safety. In fact, the Ford Figo 2017 is the only car to offer upto six airbags in its top line variant. Thus it distinguishes itself from others cars in its segment. The new Ford Figo 2017 stands out as one of the best looking hatchbacks in the country, clearly. The large dominating trapezoidal front grille, instantly reminds you of Aston Martin. It has chrome highlights and elongated headlamps look good adding some premium feel to it. Diagonally from the front it also resembles Fiat Punto Evo, as the headlamps are strikingly similar. The side looks well balanced with a slightly tapered windowline. The Ford Figo 2017 has a slightly tall stance due to the high window line. It comes with 14-inch alloy wheels, which do look small in comparison to the car. ORVMs have turn indicators on them. The rear portion is pretty neat and simple and integrates well with the overall look. The boot looks sporty and has a spoiler that adds a subtle flair. The interior of the Ford Figo 2017 is full black unlike the Figo Aspire. It also gets silver accents, to keep up with the sporty character of the car. The interiors are modern and quite pleasing. The steering is a delight to hold and has audio and bluetooth controls on it. for a change the stalk controls are unlike European cars and have the wiper controls on the left and lamps control on the right. Ford has the SYNC with Ford AppLink that takes the connectivity game to higher level, with voice commands, which help you control your phone, entertainment and apps.  The Ford Figo 2017 also has power adjustable mirrors, auto locking doors and the electric boot release and keyless entry. There are quite a few cubby holes to hold glasses, cans etc. Space is adequate in the front and back, however, three adults at the back may find the Ford Figo 2017 a little uncomfortable. Legroom is decent. The new Ford Figo 2017 has 257 litres of boot space, which is lesser than the earlier Figo, but good enough to accomodate medium luggage. If you want a bigger boot, the Figo Aspire is there. 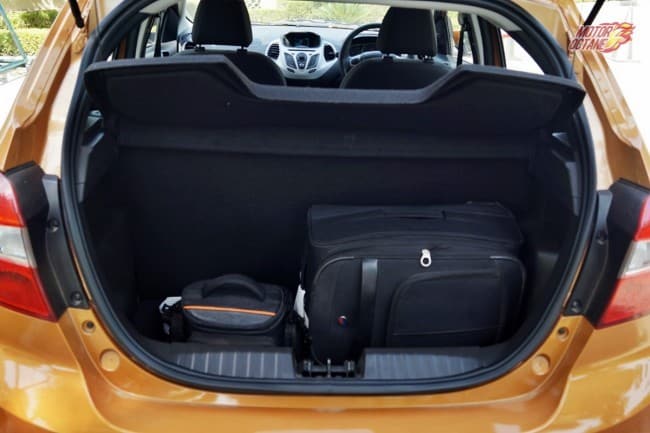 Like its sedan sibling, the Ford Figo 2017  also comes with three engine options. A 1.2-litre petrol with 87bhp of power and 112Nm torque, mated to a five-speed manual transmission. The second engine is a 1.5-litre petrol that comes only with a six-speed DCT (dual clutch transmission). A dual cluch mechanism is a advanced automatic transmission and Ford was the first in India to introduce this technology in its segments, with the Fiesta. And lastly, the third engine is a 1.5-litre diesel that produces 98bhp of power and 215Nm of torque. This engine offers good performance and while there is a little turbo lag, it manages well with a strong mid-range. Its fits in well for a city as well as highway drive.

The diesel engine in the Ford Figo 2017 offers optimum performance with good fuel efficiency and is very usable too. The diesel is certainly the more powerful option and the good bit is there isn’t much lag that we generally notice in diesel engines, this makes it easy to drive in the city or even on the highway. Ford Figo 2017 is the most powerful diesel hatchback in its segment and there is sufficient power to drive it in the city or even the highways. Push the throttle and you can overtake with ease. It didn’t have that sudden rush of power when the turbo kicks in, it is more of linear increase improving the drivability. The suspension set-up in the Ford Figo 2017 is well balanced and offers a good riding experience by making the occupants comfortable. The Ford Figo 2017 is based on the new B572 platform and this has well tuned for Indian road conditions. Ford have increased the ground clearance of this car to 174mm. Handling is one of the best you will find and the car rides very well over potholes, though you can feel a few ones. If you have driven a Ford earlier, you will find a typicality in handling, which is precise. The steering is light for city condition as and weighs up well at higher speeds. The Ford Figo 2017 remains planted under hard cornering and the brakes compliment its overall handling. High speed stability is also impressive.

Ford has ensured that the spare parts are highly affordable as the company has increased child parts. In this way one can afford to buy a spare part of an assembly, rather than an entire assembly. The increase in localisation by the company has helped them to get such a benefit. 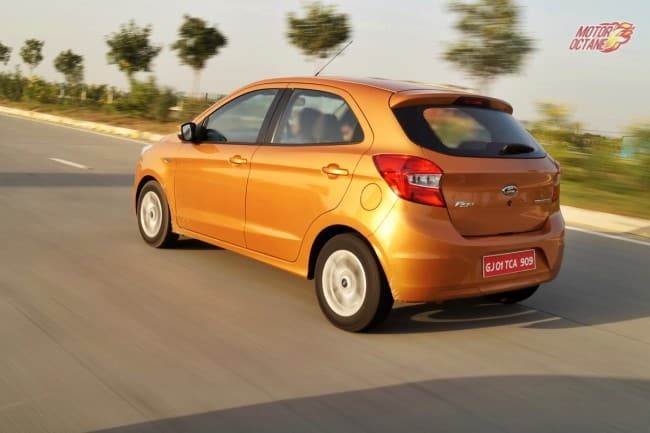 The Ford Figo 2017 has had seen a cut in price too. The mid-variants on the 1.2-litre petrol and 1.5-litre diesel had seen a price reduction. The hatchback is now a much better value for money than ever. The company has even started exporting the Ford Figo to Europe and this means an increase in production in their Gujarat plant. The increased quantity may be one of the reasons that  lead to the reduction in price.

Looking to buy a Ford Figo 2017 ? Share your details, and we will help you with the same.