With tall boy designs becoming successful, in 2015 Mahindra decided to launch their NBA player. Tall, muscular and very capable at the same time. This was the Mahindra TUV300, which TUV stands for Tough Utility Vehicle. And in 2016 the Mahindra TUV300 get an additional option of a more powerful engine and this is the mHawk100 engine. With ample of space, new and improved, more powerful engine and also the option of an automated manual transmission, also got the power bump. It seems like Mahindra went slam dunk. Now a sub four-metre vehicle I guess this is one of the if not only rear wheel drive compact SUV with a ladder-on-frame chassis, Mahindra yelled “Let the games begin”! So what does the new Mahindra TUV300 have on offer? Read our in-depth our Mahindra TUV300 and the 100bhp TUV300 review.

Mahindra has placed the prices well to rival other cars. From INR 8 lakhs to INR 11 lakhs (on-road, New Delhi). This car seems to be a steal. The built quality of the body itself feel way above some of the cars at this price point. Only thing you could ask for more would be a tank. The new engine though a bit noisy, is no slug like its older brother. The rear wheel drive lends a nice push to the vehicle. And the capacity to carry 5+2 people is just what you would be looking for.

Big, tall, boxy, muscular-like a body builder trying for Mr Olympian, yet quite compact. It is not everyday that you have a compact SUV looking this muscular. The boxy nature may leave people with love it or hate it attitude. But practicality is written all over it. The top of the bonnet and roof is flat much like a soldier. The side profile profile also is squarish. The third row has smaller glass area, as this is under 4 metres. But the styling treatment given, negates the boxiness to a certain extent. It is a tall vehicle and it seems to have smaller tyres. The D-pillar is blacked out and the tail lamps are small. It gets a SUV look due to the rear mounted spare wheel. The TUV300 is as tall as any of the SUVs, but due its smaller length, hence, it seems a bit vague in proportions. However, the ruggedness quotient is high as compared to other compact SUVs. When we step inside the cabin feels roomy with the beige interiors, and the slight black to add a dual tone to the dash portrays some elegant touch too. The plastic seems well finished but is not your soft touch plastic keeping the cost in mind. Steering mounted controls are for the music system and that’s about it. The small screen for the music system is not very large but provides all the info you require. The gear knob is a bit tall kinda gets in the way to control your AC when you are in 1st or 3rd gear. If we step at the rear, the front and rear seat do not have much distance for your legs to stretch out but having the tall stance in minds the rear seats are well raise hence your leg fall is more, not needing you to stretch making it very comfortable even for long tours let alone daily commute.The breadth is not much hence 2 heavy eaters and a slim model can sit in the 2nd row. The third row is for kids or if you have Tyrion Lannister as your family member. Surprisingly there is ample of space in bottle holders on the rear i.e fifth door. I would be able to carry a stock of port wine from Goa. None, when compared to the regular TUV300. The 100bhp Mahindra TUV300 has the same features that were available on the 80bhp variant. What is extra, is the power and torque.

Mahindra offers the TUV300 with a 1.5-litre diesel engine. But, it comes in two states of tune. First being the mHawk80 which has a power of about 84bhp, while the second engine is the mHawk100, which produces close to 100bhp of power. Both these come with a five-speed manual transmission and the powerful engine has AMT option too. The powerful engine comes only with the top variant T8, with 100bhp. This an improvement over the 80 bhp version.

Engine refinement is good, and there is very limited vibrations at low speeds. It is at high speeds that the engine becomes noisy. The engine has good power. There is good enough torque at almost any engine speed. The boost that one gets from a diesel engine seems to be missing on the 80bhp. The 100bhp is a tad quicker, but nothing that one can speak off. The 100bhp engine is more suited for the AMT version and has ironed out a lot of issues that came up with the 80bhp version.

The gear lever on the Mahindra TUV300 is tall but it easily gets slotted. The clutch pedal too is light and it makes it easy to drive. The AMT is a bit sluggish in shift, but is good enough for city use. There have been issues with this transmission, however now it the problems have been fixed. 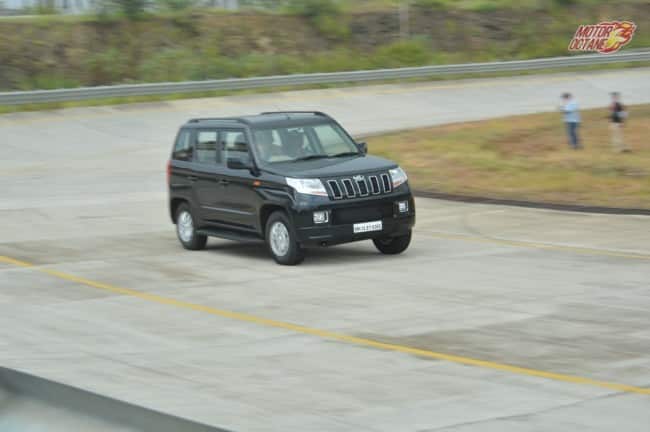 With the 100bhp engine, the TUV300 has even better power. And in city it will become more easier to drive. The TUV300 with the mHawk 100 will have a lot more grunt on the highway as well. The 100bhp Mahindra TUV300 will be powerful and our pick of the two.

The Mahindra TUV300 has a tight turning radius. It turns around in little space with ease. The airy feel of the cabin was also a major point in the feel good factor about the SUV.  However, what we did not like was the fact that this vehicle rolls a lot over 60km/h. The ride is quite pliant and better than previous generation Mahindra vehicles. However the SUV feels a bit unsettled and skittish over bad patches on the road, especially when driven fast. Mahindra’s ladder frame construction is to be blamed for that , but it isn;t very bad either. The handling of the Mahindra TUV300 isn’t very impressive, it has a prominent roll if you push it too hard. The steering wheel is hydraulic and still light enough for easy manoeuvring around the town. It is a joy to drive it in town. 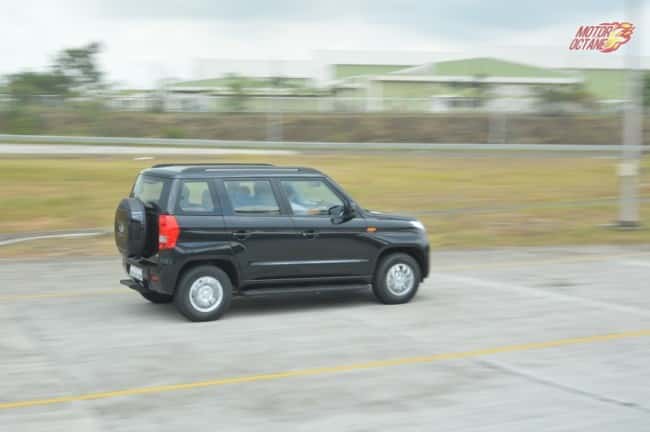 The Mahindra TUV300 gets the new dual colour of silver and black.Now you also have the option of getting the bonnet and roof painted black. Why , because Sadda m-Hak!!!This is an addition to the existing 7 shades of 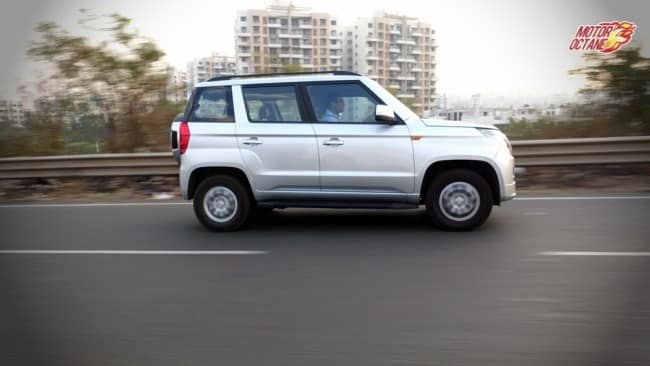