Toyota Camry Hybrid now costs INR 2.3 lakhs cheaper as it gets an excise duty benefit for being a hybrid. The VAT on electric and hybrid cars has come down fro 25% to 12.5%. This has made it a lot more affordable than before. With this, Toyota has reduced the price of the Camry and now it is about INR 80, 000 more than the regular petrol Camry.

Everyone talks of India as being a frugal country. People conjure of visions in their mind, of feebly automobiles that take their own sweet time hitting 60 on the speedo and drivers here being the ‘fuel rupee stretch’ champions of the world. Well, it is true and then, it isn’t.

Our entire, economy driving, dual-fuel approach has been limited to CNG (and to a certain extent, LPG) driven engines. Electric propulsion, even when combined with regular fossil fuel forms has been a bit of a hit or miss affair. The Mahindra E20 (nee Reva) is still a rare thing on the roads, while Honda stuttered with their Civic Hybrid. Toyota on the other hand were on a trip of their own. In what was to be a masterstroke, they decided to opt for local production of their Camry Hybrid. Bam! With that one move, they took away the single most inhibitor to Hybrid car sales in India – high taxation rates on CBU units. One would be inclined to ask why the Camry and not the Prius instead. But that’s for another time. What’s important to know here, is that luxury car buyers have responded positively and today, a whopping three out of every four Camry’s sold in our country, happen to be the Hybrid variant. The Camry was never designed to be a head turner, but this facelift has brought in some much needed oomph, particularly if you happen to view it from the front. There’s that essential bit of visual excitement to the car now. The grille has grown in size (a good thing that); the air-dam goes all trapezoidal on you and the fog-lamps plus the DRL’s have been integrated rather neatly into the revised bumper.

If you look closely, you’ll notice that the Toyota badge sitting proudly, smack in the middle of things, now has a bit of blue in it. It acts as a subtle visual differentiator. It is to proudly declare to the world that you can enjoy motoring about in sheer luxury, even as you do your bit for the environment. The chrome might not be to everyone’s fancy, but it is of a gleaming high quality. The all-new headlamps though are something that you’ll come to love. While the high-beam is still a halogen affair, the low beam and the day lamps are pure LED. View the older car and this new face lifted Camry from the side and you’ll be hard-pressed to tell the difference. Only the keen eyes reveal the subtle differences in the skirting on the new one. Things do get a wee bit more noticeable at the rear, for the tail-lamps do get the LED treatment and the bumper has been revised too, but that’s that. All-in-all, the new, face-lifted Camry ticks most of the right boxes on the exterior. The pre-facelift Camry boasted of an interior that could teach a thing or two to the segment-dominating Europeans and the new one continues the good work. You’ll notice that the mood-lighting wears a muted blue shade that’s most relaxing, further helping the occupants leave the worries of the world outside. The buttons on the dash have been rearranged slightly, but it is still all very easy to understand. From the meter console to the hi-rez, touch-screen display in the centre – there’s a fair bit of information flowing between them. Toyota have even packed in a nifty graphic UI that displays the working of the hybrid system in real time driving conditions. The seats out front are large and come well-bolstered. There’s full electronic controls for the backrest as well as height adjust, which means it is a piece of cake to get a real good feel in the cockpit. The steering is nice and light around town, which makes twirling, what is a fairly large car, a rather easy thing. However, it felt much too vague as the speeds built up, nothing too uncomfortable, but a tighter steering would have worked wonders here. 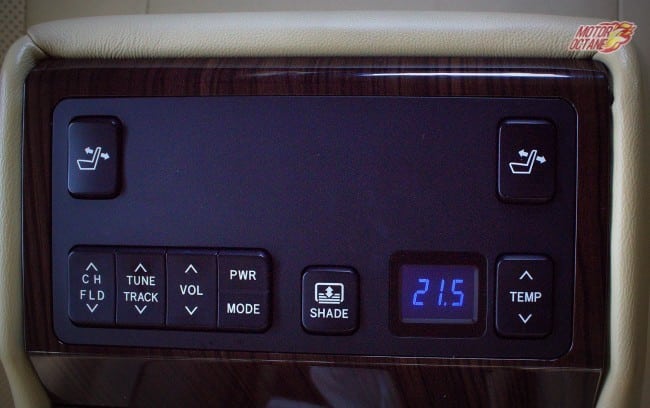 Things at the rear are quintessential Camry. You’re welcomed by plush upholstery that one virtually sinks into. The feeling is further heightened when you recline the rear back-rest by up-to eight degrees. A friendly warning here though – once you sink into that sofa seating, you’re going to have a mighty tough time in getting out. It really is that comfy out back. This is a car that you’ll beg to be driven around in. Toyota have kitted the car with its own climate control zone at the rear and all the leg/knee room that one could seek. We thoroughly enjoyed powering up the blind on the window screen and sinking into a cocooned world of our own. The blinds on the rear windows though, are the manual type and require you to exert some effort. Toyota’s confidence in the Camry’s rear seat comfort is so complete that they have built thick grab-rails into the back of the front seats, to aid passengers in exiting the car. The powertrain on the Camry Hybrid is a sublime tribute to the Gods of electro-mechanical art. You start off in pure electric mode and continue to run on battery power at low speeds. This is most helpful in choc-a-bloc traffic conditions, when the world around you is going honking mad and you’re sitting there in a calm, serene environment – sheer bliss! There is a wee bit of whine for those of you with keen ears but the major chunk of the noise is from the tires. Not obtrusive in any way, mind you – but simply a fall-out of having a propulsion system that’s way quieter than what’s usually on offer. 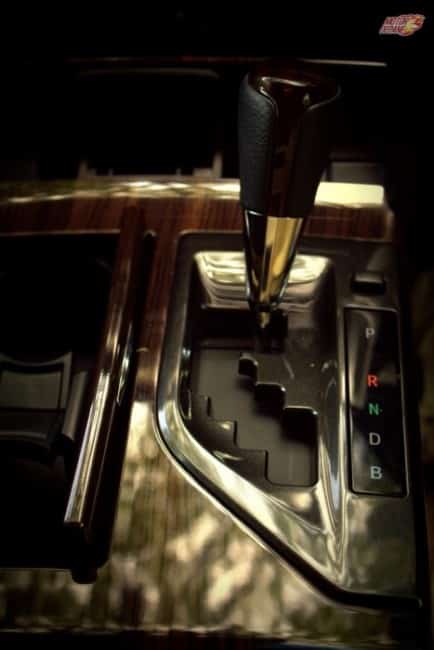 The 2.5 Litre petrol motor is carried over from its earlier avatar and continues to make 150+ Bhp. This is joined by an electric motor in series-parallel sequence, thereby bumping up power to over 200 Bhp. No, we didn’t get our math wrong (though there are those among us who’d argue that one plus one equals five). The lower combined output is quite simply the result of the time differential in the peak power generation of the two motors. On the road, she’ll please you with her butter-smooth power delivery and throw in a bit of a surprise every now and then, with her speed-gathering habits. The CVT ‘box does struggle when you get those ‘let’s nail the throttle’ urges (you really shouldn’t be buying a Camry for outright acceleration), but barring those rare moments, things are nice and smooth. 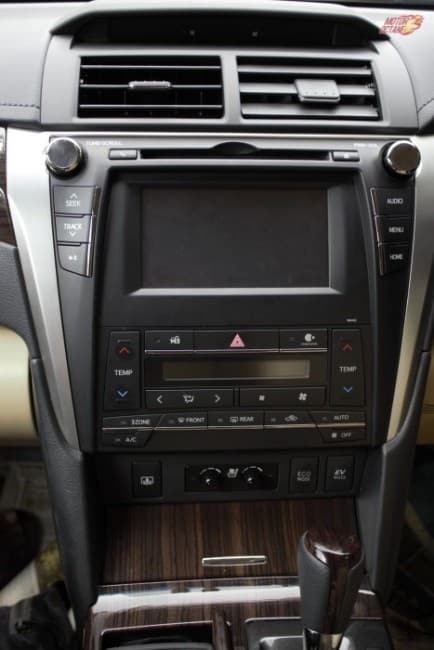 We’ve said this before and we’ll say it again – Toyota have really nailed it with the way the Camry shifts seamlessly between the two power systems. We literally lost track on the number of times, we caught ourselves double-checking if the car was running or not in traffic. Toyota haven’t given a manual override option on the Camry, and drivers have to make do with Economy and EV modes. No there’s no ‘Go-faster’ option either, at-least not a dedicated one. But floor that throttle, wait that split-second as the CVT ‘box catches on and then hold-on. There’s this steady build-up of power as the electric motor combines its output with that of the 2.5 Litre motor under the hood that sends you surging through in whichever direction you wish to choose. The Camry Hybrid features regenerative braking as standard feature and while that’s great from the fuel economy/energy efficiency perspective, it means that the pedal feels wooden. You’re really not going to like it the first few times you’ve got to brake hard in the Camry Hybrid. Having said that, the overall braking performance in the real world is right up there with the best and we had no trouble whatsoever in bringing this large car to a halt. The biggest problem with the Camry is the badge it wears. The Toyota logo commands a high level of respect in the Indian market, but when it comes to luxury sedans, people still tend to prefer the European marques. Only the discerning few, the ones that have the wisdom in going beyond exterior badging and brand consciousness, are currently opting for the Camry Hybrid. Which is a pity really – for there’s no other car in the segment and indeed, in the country like this one. 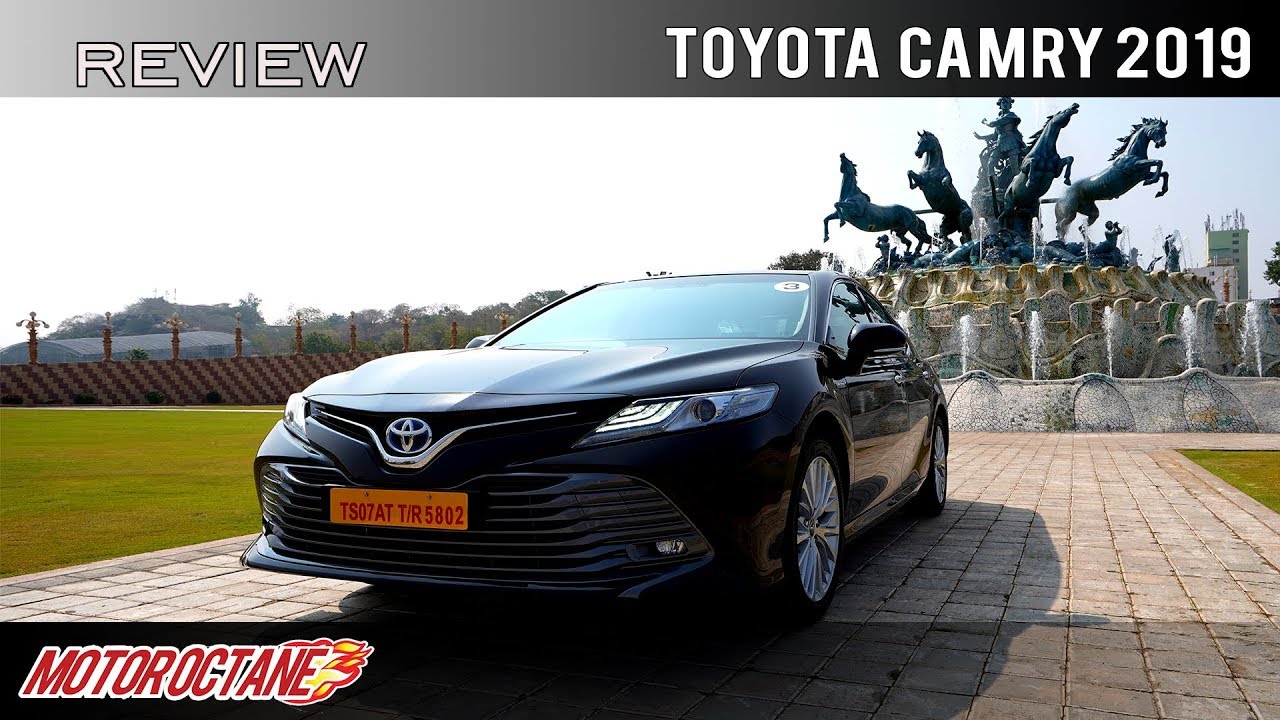