Home News Mercedes-Benz to launch the CLS and E-Cabriolet Mercedes-Benz is due to launch the CLS 250 CDI and the E400 Cabriolet after the B-Class facelift. There is a good possibility that both might be launched together but are due to be launched very soon. The CLS MY15 gets multiple upgrades like new set of headlamps with LED cluster that resembles the Stuttgart-based manufacturer’s new design language.

This time the CLS won’t be launched only with the 3.5-litre V6 petrol engine, but even the 2.2-litre diesel will be offered with it. In the initial stage, the CLS will be a CBU however the company will be looking at assembling it in the Chakan plant. This will help to reduce the price of the CLS, which is based on the E-Class platform. The E-Cabriolet is also due to come to India and this will be the E400 version instead of the E350. We have even heard from some of our sources that an E250 CDI Cabriolet could also be introduced. But we do not have confirmed reports for that. The E400 Cabriolet gets similar headlamps to the E-Class, however this does look a lot more uber and stylish than the E-sedan. This is a two-door version, however it can seat four people.

The pricing of the CLS diesel will be about Rs 95 lakhs (on-road), while the E400 Cabriolet will be costing approximately Rs 70 lakhs (on-road again). The next launch from Mercedes-Benz is the B-Class facelift. The B-Class will come with B200 CDI engine, which is more powerful than the current B180 CDI. There are some cosmetic upgrades too.

The CLS 250 CDI was spotted at the Chakan plant. 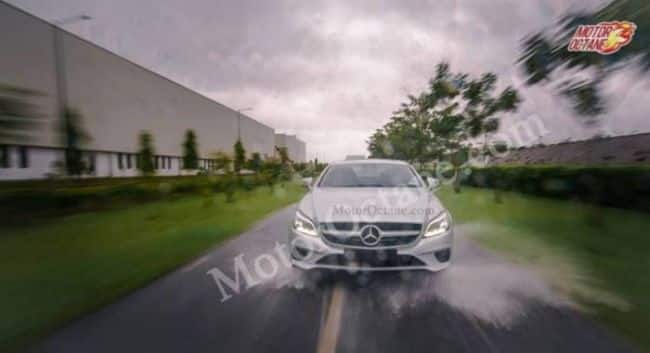