Ford’s most successful hatchback for India has been the Figo. The second-gen was launched in 2015 and now the 2018 Ford Figo facelift is on its way. The American automaker will be getting the titivated version with some additional bells and whistles. The current Figo wasn’t just an upgrade in the power and technology but also in features too. This meant a hike in its pricing, making it more premium than before.

The facelift version will get a new front grille, redesigned headlamps and updated interiors too. We reckon of the interior bits will be inspired from the Ecosport 2017. There will be a large touchscreen infotainment system and other new new features. The facelift Figo will get come with the same 1.2-litre petrol and 1.5-litre diesel. The 1.5-litre petrol engine will be revised and the new Dragon one will be opted. This will have more power and better performance too.

New Ford Figo 2018 will have cosmetic changes too. There will be a change in its front grille, headlamps and even tail lamps. On the inside, the dashboard will undergo a bigger change. A new touchscreen system will come in, the numpad dialer will be go off. There are many changes in the planning.

There will not be a major difference in the pricing of the 2018 Ford Figo facelift. Even though we are expecting a new Platinum variant to be offered as well. At the moment, the Figo is available in 6 trims of which diesel only gets 5. Ford is offering a high number of customisation packages and features too. The higher variants might see an increase in their pricing as it will offer more features. 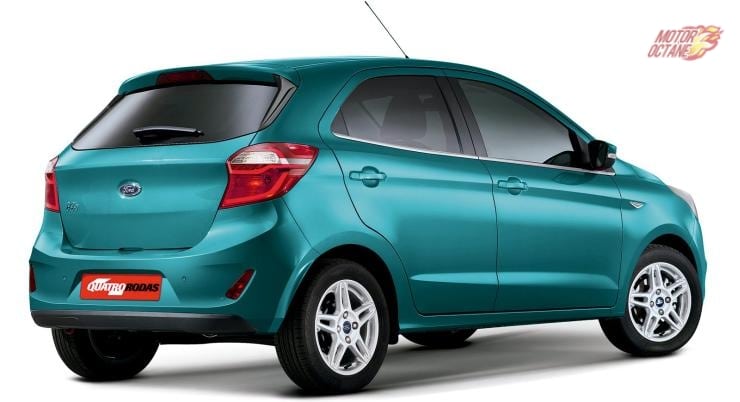 It will be coming to India by mid of 2018. The new Ford Figo facelift will be launched by mid 2018 from what we expect. This updated version of the hatchback should make things more exciting. It won’t be anytime before that.

The fascia of the Ford Figo facelift shall see an upgrade. A new front grille with revised headlamp design and new front bumper. This is similar to the one that will be exported to Europe also. The side profile might not change at all. There shall be a new set of alloy wheels.

The Figo facelift will be having all-black interiors. The steering wheel will be the same one that shall offer with audio controls. The instrument cluster is also subtle and easy to read. The centre console will see some changes, and we do expect it to get touchscreen system with navigation and reverse camera. There is climate control too. There will be six airbags offered on higher variants. We expect even the base model to dual airbags and ABS as a standard feature. The front row seating is good and spacious. The rear seat space too is good enough. There is more than sufficient rear seat comfort and even decent boot space. We also expect touchscreen to be offered in lower variants also. There will be Android Auto and Apple CarPlay also on the variants with touchscreen system and even reverse camera on the top variant. Ford products are tech-loaded and the Figo facelift will also offer the same. There will be no rear AC vents on offer either on the Figo as 2018 either.

The 1.2-litre petrol shall churn about 80bhp of power and will come mated to a five-speed manual transmission. The 1.5-litre petrol will be the new three-cylinder dragon engine churning about 121bhp and will come with a six-speed DCT. The 1.5-litre diesel engine will produce about 98bhp of power and 215Nm of maximum torque. This shall be made available with a five-speed manual transmission. This is the most powerful diesel engine in this segment. There will be 6 variants on the petrol and about 5 variants on the diesel manual. Petrol automatic should be made available in 2 variants. The variant list will remain the same on the new Figo 2018. There will be no change in that. We expect the higher variants to get more features.