Datsun rediGo 1.0 Gold new limited edition is launched. On the outside, the variant offers gold-inspired paintwork, blacked out front grille with gold inserts. The wheel cover also has golden accent. On the inside, the redi-Go gets Bappi-da inspiration too. There is gold-inspired interiors. To begin with ambient mood lighting that can be controlled by smartphone app, new audio system with Bluetooth and keyless entry. There will be three colour options on redi Go 1.0, which include silver, grey and white. The price is Rs 3.69 lakhs (ex-showroom, Delhi).

Datsun doesn’t seem to be content with the new engine but will also look at adding an AMT to this new engine. There have been rumors around this. The introduction of a 1.0-litre engine has added more value to the Datsun rediGo and also opened up newer options for customers in this segment . The Renault Kwid 1.0 has been doing well and now the Datsun rediGo 1.0 will compete directly with this car.

As per the initial plan of the rediGo, the company would have stuck to the 800cc petrol engine. But the 1.0-litre engine has now become a reality. This just does not offer more power, but even certain cosmetic upgrades. This is a compact hatchback and competes with other entry-level cars. This is a tall boy design and it shares its platform with the Renault Kwid. Datsun rediGo gets daytime running LEDs, which is a unique offering in this segment. At the same time, the rediGo offers a amazing space and features on the inside.

Earlier, only a 800cc three-cylinder petrol engine was offered on this hatchback. We expect an AMT option to come in as well. We review the new Datsun rediGO 1.0 and tell you whether it is a good buy. Keep reading further.

The Datsun rediGo 1.0 will be launched by 26th of July 2017. The bookings already commenced and the company will look at bringing it in the market at the earliest to capitalize on it. This will be the updated version of the rediGo as well. Datsun will want to enhance the Datsun rediGo 1.0 and offer more on it. The Datsun rediGO 1.0 looks identical to its 800cc sibling. There is absolutely no change on the exteriors. It gets the same crossover styling, sleek stretched out headlamps, the signature Datsun grille and a short hood. It also carries the LED daytime running lights, which are the only ones in this segment. From the side, it stands tall and there is no change in the wheels either. The rear also remains the same and we do agree that it has one of the best looking rear ends in the market. The vertical taillamps add to the looks. The only difference externally is that this car has a 1.0 badging on the boot lid. Overall, the Datsun redo 1.0 is a good looking car and gets eyeballs rolling whenever it is out on the streets. The high ground clearance is also a boon and it is best in class. The interiors of the redigo 1.0 also get refreshed . The basic design and features remain the same but th eclair theme has changed. The interiors are now all black. This is a smart move by the company as the black colour has added some life in the otherwise dull and drab interiors. This was a much needed improvement and we think this will help lot for the car to sell. There are silver accents on the AC vents, that have a brushed look.The AC control knobs also are silver colored. Rest all remains the same on the RediGO 1.0 and there is no change in the interiors. A new 1.0-litre three cylinder engine now powers the Datsun rediGo. This engine churns out 67bhp of power and  91Nm of maximum torque. This is the same engine that is used on the Kwid also and the power figures are also identical. It comes mated to a five-speed manual transmission. This engine has certainly boosted the performance of the rediGo. It is now more powerful and fun to drive. The rediGo has a smaller footprint than the Kwid and is lighter too, and this has somewhere made it peppier too.

We are particularly impressed with the refinement in this engine and Nissan engineers have done a good job to reduce cabin noise.

An efficiency of 22km/l is claimed as per the ARAI cycle on the Datsun rediGo 1.0. The real world mileage should be somewhere about 14km/l in the city and close to 20km/l on the highway. Apart form the engine, there are not too many new features to talk about. The Datsun rediGO 1.0 now gets remote locking on its top end version. The audio system is same – the basic one. It does not have bluetooth connectivity. We had expected  a day/night mirror on the top end variant but it misses out on it.

The ride of the rediGO 1.0 is impressive. It is a bit harsh at slow speeds but it smoothens out as the speed increases. The rediGO now feels more refined and there is less cabin noise as well. It offers best-in -class ground clearance and this makes it almost a go anywhere kind of car, given our road conditions. 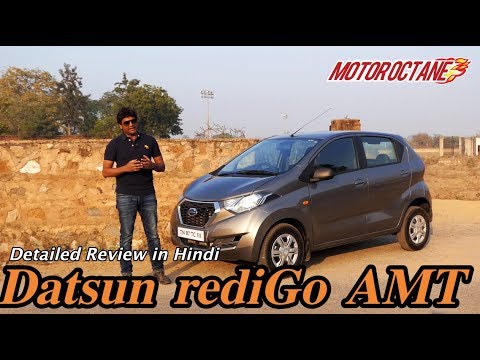