The new Yamaha FZ25 has been launched and this new 250cc that will compete with the existing 200cc naked bikes, as it has been priced aggressively. Yamaha has been successful with its 150cc performance motorcycles and the Japanese bike maker is looking to take on the other bikes that have a 200cc as it has been priced competitively. How does Yamaha FZ25 vs KTM Duke 200 vs Bajaj Pulsar NS 200 comparison fare? Which one should you buy? We share all the details with you. All the bikes look stylish and appealing. The new Yamaha FZ25 looks macho and at the same time, it seems to be bigger than the current competitors. It is a lot more broader and muscular. The other two are aggressive and sharp looking. The FZ25 does seem more premium. At the same time, all the three bikes so have a stance and are liked by many. Lets leave the design bit, as it is a subjective topic and let riders decide the better design themselves. In terms of performance, the Duke 200 and the Yamaha FZ25 are the stronger of the lot. This is majorly due to the fact that they have a lighter chassis, while all the others have a similar power on paper. The Duke 200 has an advantage on the Pulsar NS 200, but the Yamaha FZ25 is likely to have better grunt on the Duke 200. The bike shall be smooth, and we expect lesser heating issues too. At the same time, the ride quality on the Yamaha FZ25 and the Bajaj Pulsar NS 200 will be a lot more plaint than the KTM Duke 200. The Bajaj bike doesn’t get fuel-injection, which is where it looses out on performance. At the same time, the bike doesn’t have the performance like the other two. The KTM Duke has a shorter gear ratio, so it has a lower top speed when compared to the Bajaj Pulsar NS 200. There is no doubt, at the moment the Yamaha FZ25 is a clear winner. Daytime-running LEDs, LED headlamp and other aspects make it a better option. We have to wait for the Duke 200, as that will be another bike that could get some updates. The Pulsar NS 200 shall also get some minor updates. None of the bikes offer ABS even as an option. The other two will soon get daytime running lamps as this will be a mandatory feature from April 2017. The Pulsar RS 200 already has DRLs, the NS 200 should get a regular bulb as a DRL.

This should be a close call. But we reckon, the Yamaha FZ25 could be a tad more efficient than the rest. This engine seems to be tuned for better mileage and performance. While the Pulsar NS 200 is heavier and the Duke 200 has been made for performance. In terms of pricing, it is a very close call between the three bikes. As the Yamaha FZ25 looks a lot more stylish, we shall be banking on it than the other two. Yamaha has been known to built highly reliable, powerful and fuel-efficient bikes. Whats more it should even have a more composed ride than the Duke 200. So, our pick of the lot is the FZ25. The Pulsar NS 200 is certainly cheaper of the lot, but it does miss out on a lot of features. It doesn’t even get fuel-injection. 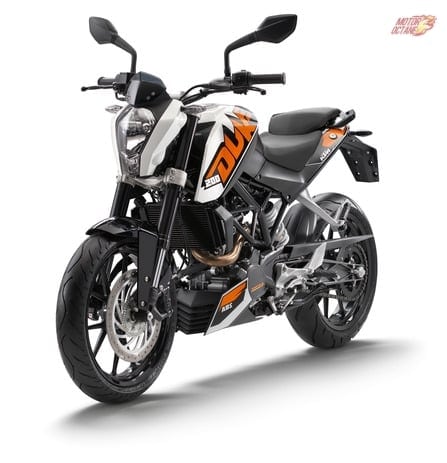