The Yamaha R15 now comes in its third generation. This is the Yamaha R15 V3, which has been launched after a lot of wait. R15 brand has been very successful for Yamaha in India. The R15 brought back Yamaha’s performance heritage. That is what Yamaha is known for. The first-generation of the R15 was a run away success. Now, it is the 3rd generation Yamaha R15 V3 which is creating waves. This bike has been built on a Delta box chassis and it is offering new features as well.

The Yamaha R15 is an important motorcycle for the Japanese manufacturer. In India, it also has a high brand appeal. Street bike enthusiasts all over the country have a special place for this bike and have been the main reason for the success. The second gen bike also got a good response. The R15 now gets a full makeover as it is in its 3rd generation. The Yamaha R15 V3 has been launched finally after a lot of wait. Enthusiasts are once again elated and the bike does look much more promising now.

The R15 has brought back Yamaha’s glory to a great extent. This is a very affordable bike that is quick also. It is a feature loaded bike as well. The R15 is quicker than bikes that are bigger. The R15 V3 now gets even quicker. It has the same engine capacity, but there has been an increase in its power output and torque too. Yamaha has built this bike on the Deltabox frame and the styling now resembles the bigger Yamahas. What does this new bike have on offer?  Read further to know more.

This Yamaha R15 V3 is more expensive than the FZ25. The R15 V3 is a bike for enthusiasts, hence it will come with a lot more bells and whistles. The fairing it top notch and carefully engineered.  The suspension set-up, quality of materials and even the features on offer will be a lot more than most of the 150-250cc bikes. In terms of performance, this bike could compete with 250cc bikes as well. The R15 V3 ABS will not be on offer initially, but it shall be added later, once the new norms come in.

The bike had been unveiled at the 2018 Auto Expo in February. It has been launched and the deliveries have begun. This new bike is expected to once again revive the sales of the R15, which has lately seen a dip in numbers. The new bike will attract many bikers who aspire for a fully faired racing machine. The new R15 V3 looks absolutely stunning and has got sharp styling, that is expected from a Yamaha.

The Yamaha R15 V3 comes in totally new colours. There are only 2 colours on offer right now. These colors make the bike look very appealing.

Unfortunately the bike yet does not come in black colour. There are only two colors on offer. Yamaha may launch a black colour at a later stage.

In terms of mileage, there will not be much of a change. The engine has seen an improvement in power and chassis has become a tad lighter. So, the performance will improve but the mileage should be similar. In city, it should return about 40km/l and it goes to about 49km/l on the highway. 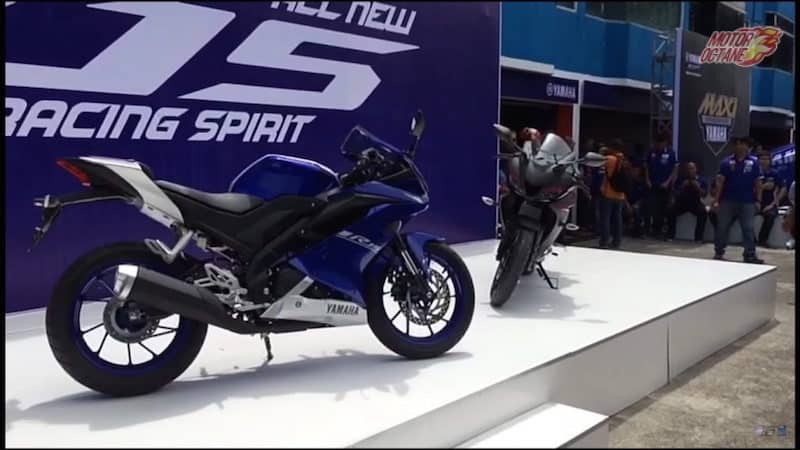 A top speed of about 150km/hr is what this bike will have. It has been tuned for better in=gear performance as opposed to top speed, as that is what is of more significance in our riding conditions. Hence, there shall be no change in the top speed. The new V3 will have almost the same top speed like before. The top speed on the previous bike was 145km/hr.

The new R15 V3.0 is more efficient than the earlier version because of the Delta box frame, slipper clutch and even the new front fairing. Yamaha shall be offering a range of new features on the bike and this will be one of the major talking points. Yamaha will be offering LEDs in tail lamp and even head lamp. There shall be a bunch of features on offer too. There is also a fully digital instrument cluster

This 155cc, single cylinder, liquid cooled engine develops 19bhp of power and 15Nm of maximum torque. It comes with drive-by-wire technology and variable valve actuation. This is what makes the difference in performance of the engine. The engine will come mated to a six-speed gearbox. All these add on to the ability of the engine to perform better. It will be much improved over the outgoing model. The V3 gets a new look as it uses the R- Series Design . This makes it look bigger, bold and stylish than ever. There is the split headlamp design with a tiny nose. A large windshield is seen here and headlamps have LED lamps along with daytime running LEDs. Wing mirrors are bigger in size and license plate is located higher. In images the bike looks big and mighty, in reality it does sit low. The fuel tank has sharp lines and has a chiseled look. The side indicators are located on a lower point.It gets chunky body cladding at the sides. The seat is stepped one and rear has been raised. The tail lamps also have LEDs and the alloy wheels are body coloured. There are several new colour schemes, but the overall paints are the same. It is the livery that has changed on the new-gen bike. This will help to differentiate it with ease. Fully digital instrument cluster is being offered. There is gear shift indicator and there is light to for the shift. There will be an increase in its performance for daily riding and even outright drag race. The gearbox is the same, however it has been tweaked to match with the engine’s performance. There shall be assist and slipper clutch on offer but the ABS will be missing on this new bike. Next year when ABS will be mandatory for bikes above 125cc, Yamaha will have no option but to offer one.

It was believed that the bike will get inverted forks at the front, however, in order to keep costs low, Yamaha will be going in for regular telescopic forks for the Indian spec version. The rear will have a monoshock. This was the same set-up for the outgoing bike too. The suspension will be tuned better this time. The ride quality is likely to be improved on the new bike. The tyre width has been increased as the tyre now has a track of 100, while the rear gets 140. This will offer better grip as well.

There is an a major difference amongst the two in offering. The Yamaha R15 V3 has a new chassis, updated engine, more power and better features. In terms of looks, it resembles the R6 to some extent. This is the company’s all new bike for the Indian market too. R15 V3 looks more aggressive than V2. There will be a major difference in the styling, engine tuning and even the comfort. The new bike has better performance, handling and even an improvement in its ride handling, especially for the rear passenger.