Ford has been a one car company. First the Ikon, then the Fiesta, followed by Figo and then the Ecosport. But, this time around, the Figo and the Aspire too have been contributing to the sales of the brand. The Ecosport is the spear head product for the company. This has been leading the sales number and is the most preferred vehicle too. The Ford Ecosport 2017 is here, it gets more features, a new petrol engine and transmission and also redesigned exterior and interiors.

The 1.5-litre Dragon engine is a three-cylinder engine that churns about 121bhp of power, 150Nm of torque and comes with a six-speed automatic transmission. This isn’t the DCT, but a regular automatic. The diesel engine is unchanged and there will be five variants on offer. There are multiple changes outside and inside the vehicle. In terms of features too, there are more bells and whistles now on offer, some of them are segment first as well. What has changed the compact SUV? Read further to know more.

• Doors that unlock in the event of a crash • Driver’s side windows with one-touch up and down functions • Ambient lighting for the footwells

• Side and curtain airbags

• Isofix child-seat mounts at the rear

We have done a preview video on the Ecosport. This shows the exterior and interior of this compact SUV. Ford is looking at making this a great option for this segment and it is clearly visible from the changes it has made on the 2017 Ecosport. The vehicles are new and bigger, more power for the petrol engine, better claimed mileage and even a new front end. The interiors are also all new, with new steering wheel, instrument cluster, large touchscreen and even new centre console.

In terms of pricing, we do not expect too many changes, as the local content has been increased to about 80%. This means the new Ecosport will be highly affordable and there will be a price drop if the company continued with the same features. With additional features, the 2017 Ford Ecosport will be a lot more affordable now. But it does have six airbags and it is the only one in this segment to offer that and hence, it will be a tad more expensive than the rest. The new 1.5-litre petrol engine is locally built and even will be exported on other Fords too. This will reduce the cost of the SUV, especially the petrol engine.

The biggest change on the Ecosport facelift is is face. There is a large front grille that resembles the Endeavour. The front grille is big with horizontal chrome slats. The headlamps are sharp and have projector lamps and daytime running LEDs too. The front fog lamps are also larger than before. This makes it look bigger and different. It is now a part of the Ford SUV family. 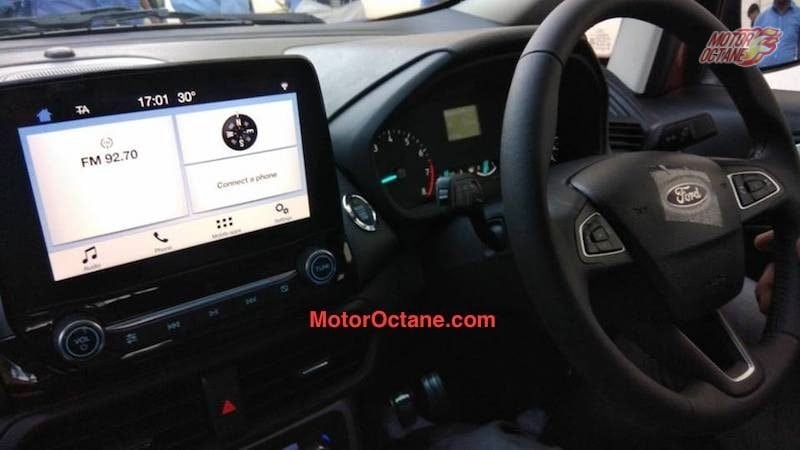 Ford will enhance the interiors too. The 2017 Ecosport shall have an all new set of features. There shall be the new cabin design, which will make it look modern. The numpas centre console will be gone. There shall be a steering wheel, instrument cluster and centre console too. The SYNC 3 system will be offered too. There will be Android Auto and Apple CarPlay for the first time on a Ford vehicle in India. This will support many connectivity apps too making it an exciting offering. The Ecosport shall boast an 8-inch touchscreen system  with reverse camera, new switchgear and even a high-quality 675-watt speakers too. These speakers will have B&O Play tweeters too. The 12V charging will be available in both the rows. A 110V will be offered on the centre console. The other features on offer will be automatic headlamps, rain sensing wipers, cruise control and even 6 airbags too. The space will not change on the Ecosport as it is a cosmetic upgrade only. Ford will continue to offer the electric steering wheel too. The 1.5-litre Dragon petrol engine on the Ecosport will be a good new addition. This new engine is light weight as it is an aluminium block that is light in weight. The timing belt is in oil for reduced wear and tear and integrated exhaust manifold is also there. The throttle response is better and there shall be an improvement in its mileage by 7%. The NVH levels will be lower too. The new petrol engine shall churn about 121bhp of power at 6,500rpm and 150Nm of maximum torque at 4,500rpm. This is about 13bhp and 10Nm more than the outgoing petrol engine. This will be the most powerful petrol engine on paper and maybe even real world. This engine will be offered with a five-speed manual and six-speed DCT. The 1.5-litre diesel engine will churn about 99bhp of power and 210Nm of maximum torque. This same engine will continue on the 2017 Ecosport. Ford should be looking at discontinuing the 1.0-litre EcoBoost engine for the Indian car market.

At the moment, we cannot say much about the mileage of the new Ecosport petrol. Ford claims an improvement of about 7%, so we reckon it should be about 12km/l and 11km/l for the manual and auto respectively in the city and highway should be 16km/l and 17km/l. But for the diesel, it is about 15km/l in the city and close to 18km/l on the highway. There shall be no change in the offering for the diesel engine.

There shall be eight colour options. There will be the Grey, Panther Black, Moondust Silver, new Blue, Diamond White, Chill Metallic, Golden Bronze and maybe even a new Arpoadqr Red as well.

Ecosport vs All – Must Rear and Watch video comparison

The current Ecosport and the Brezza are already neck-to-neck and the updated one will continue to fight it out with the new Ecosport. The new Ecosport will have a few advantages on the Brezza, this will include more engine options and the diesel being more powerful too. So, the three engines shall be 1.0-litre turbo petrol, 1.5-litre dragon petrol and a 1.5-litre diesel engine. Maruti has the advantage of better drivability in city and the brand’s service network. Maruti has a better brand name too. Ecosport is the only one with six airbags in this segment.

This is a close one between the two. Both offer petrol and diesel engines and are oriented towards driving joy. Both look stylish and have good performance too. Nexon and Ecosport are likely to have similar features too. The Ecosport shall get an update in features and price will be the only deciding factor these two SUVs. The 2017 variant could get an advantage on the Nexon especially with the petrol engine. Advantage of the Ecosport are the multiple airbags, which isn’t offered on the Nexon.