One of the 4×4 Clubs has rendered as image of the new-generation Thar. Now, this isn’t actually how the Thar might look as it misses out on the seven vertical slats, which is a Mahindra signature. This design of the Thar makes it look appealing and it has a meld of modern and retro looks. The Mahindra on the front grille reminds of the Ford embossing on the F150. 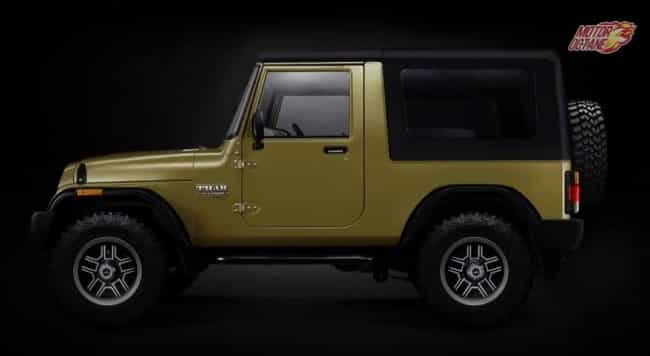 Mahindra is working on an all new Thar which will see the light only by 2018. The new Thar will be a complete departure from the existing vehicle. It will be based on a new platform, which will a derivative of their new generation ladder frames.The Thar has been a consistent performer for Mahindra, as it has distinct markets for both its version which are the DI version and CRDe version. Mahindra had launched a facelift of the Thar last year, where it had added several upgrades like more contemporary looking interiors and also a rear differential lock.

With the adventure driving sport catching up in the country, Mahindra will look at further strengthening their position in this genre and offer a modern product to its loyal customers and also attract new customers in to the Mahindra family.

The New Mahindra Thar will make use of a new platform which will improve its rigidity. There will also be an all-new engine that will do duty in the Thar. This new engine will be a 1.5-litre unit that will be derived from the mHawk engine. It will churn out around 100bhp of power and around 240Nm of peak torque. This new engine will be a more frugal unit. The new-generation Thar will be torquey and at the same time it will even fuel-efficient. The new crash test norms mean that the Thar chassis will be lighter and this power will be more than sufficient. The currently used 2.5-litre CRDe has about 105bhp of power and 247Nm of torque. The difference between the power output is minor and the engine size is a lot smaller too. This engine is a lot more refined, better NVH and even fuel-efficient. Mahindra Thar’s new-generation will be modern, small and yet torquey. At the moment the only challenge that Mahindra faces is to make this engine to work on a 4×4.

The All-New Thar will get a contemporary styling with neater lines but will retain its butchy and rugged looks. This adventure vehicle will also get Airbags and ABS

The Mahindra Thar 2018 will be launched by mid 2018. The company might build this on the TUV300’s platform. This is the same platform on which even the new Bolero is likely to be made. Mahindra will discontinue the current Thar as it will not be able to meet the 2018/19 crash test regulations.