After gaining some good ground with the redi-Go, Datsun is preparing for a new vehicle. The Datsun Go Cross is a seven seater cross that will be built as a new premium offering from Datsun. The Go Cross will stylish, powerful and even feature loaded. Datsun is looking at changing the rules with this new cross. It shall be the fourth product in the company’s portfolio. The Go Cross has been spotted in Indonesia. This is an indication that this seven-seater vehicle will be making its way into India as well. This will have dimensions of a compact vehicle. Hence its length will be under 4 metres. This car is essentially a more rugged version of the Datsun Go Plus station wagon.

Datsun will be offering the Go Cross will stylish exterior and interiors. There shall be more features on offer. The engine on offer will only be the 1.2-litre or 1.0-litre petrol. This should churn about 68bhp for them. It will have good enough torque too. This will come mated to a five-speed manual transmission. Not sure if there will be an AMT on offer also. There will be more than sufficient power and torque in this engine. There will be no diesel engine on offer. This will be competing with other mid-size hatchbacks in terms of pricing. 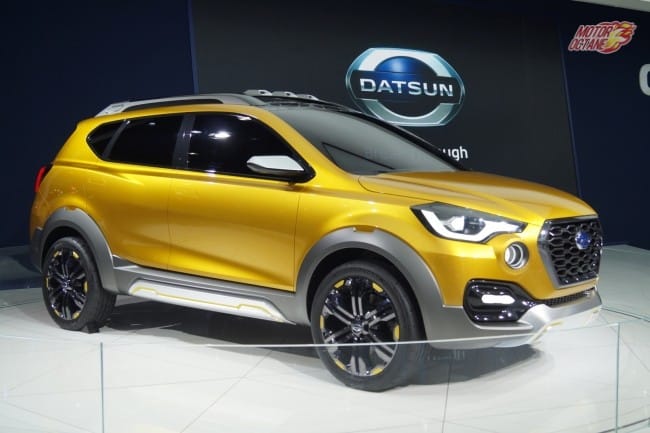 As this will be a crossover targeted for young audience, it will be priced at an affordable price. We reckon, the Go Cross price will be about INR 4.5 lakhs to INR 6 lakhs. This will make it an affordable crossover to be considered. This will be a good option to procure. We aren’t certain if the Go+ will be continued on sale. Maybe, that will see a reduction in pricing then. This is likely to replace the Go+, or only the lower variants of the Go+ shall be made available.

Datsun will be launching the Go Cross mostly by the end of 2018. This will be another new product that will attract urban buyers with its styling and presence.This will be the company’s first new vehicle after the redi-Go. Datsun is looking at getting more products on the CMF-A platform, just like the Renault brand.

The mileage on this new crossover won’t be changed much. It will have an ARAI figure of close to 18 km/l, while in the city it should return 13 km/l. On the highway it will be close to 17 km/l. This will be the economy for the manual transmission. We aren’t certain when will the AMT version be launched.

This isn’t an all new design. It is based on the Datsun Go+. This is a sub 4 metres vehicle that has been redesigned to make it look stylish and attractive. The Go+ was simple and straight forward design. This has got some design treatment to make it change its styling. From denim it has gone to wear a designer dress. The front grille looks more trendy, the headlamp design is sharper and stylish. The side profile is similar to the Go+. There is a body cladding that runs across the body. The Datsun Go Cross looks a lot more rugged and appealing. It now has road presence and the design looks futuristic. The design and styling will be the Datsun Go Cross selling point. This will make many consider this vehicle for its appeal factor. 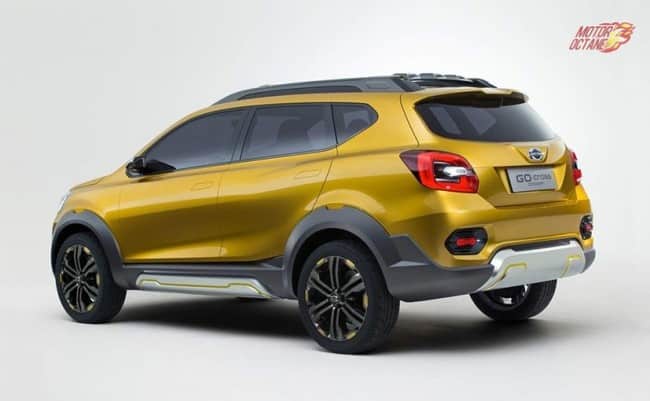 Another interesting part in the car is the set of roof rails and a tray which is also expected to be offered in the production version. The rear has a small  but smart spoiler and fancy tail lamps with a C-shaped illumination inside. which will likely be carried over into production. The Datsun Go Cross production model will be a lot similar to the concept version. The production version will have a higher ground clearance.

On the inside too, the Datsun Go Cross gets multiple changes. To begin with, it shall get an all new dashboard. This will be shared with the newly launched Datsun Redi Go. In terms of styling, it will get modern and fresh styling. There will be improvement in the interior quality and design. The standard Datsun steering wheel will be there on the Go Cross. There will be a music system, two speakers and ABS will be offered as a standard. This vehicle should get a touchscreen system too on the higher variants, which will make it an exciting option to consider. The grey upholstery on the Go+ is likely to be replaced with something more appealing like black or beige.

As the Datsun Go Cross will be launched post April 2017, it will even get dual airbags as a stand feature across all variants. The Go Cross will offer the same space as the Go+. So, the front two rows will have good enough space for tall people as well. The third row will be primarily for kids only. The Go Cross can be used as a five seater with a large enough boot too. So, there are two options on this cross. This will be a good option for those looking at a hatchback with a large boot. Datsun brand is likely to continue with the same 1.2-litre or the 1.0-litre petrol engine only. It won’t be offering a diesel engine. As most of the first time buyers prefer petrol engine, it doesn’t make it ideal to get a diesel engine. The Go Cross will have a petrol engine and it will be producing about 64 bhp of power. What is good is the drivability. One doesn’t need to shift gears that often while driving in city. On the other hand, the Datsun Go Cross will have good insulation too. So, the engine noise will be much lesser as the cabin will have better insulation. This will come with a five-speed manual. The Datsun Go Cross could even get an AMT option and this will make it a great option to consider for urban dwellers.

There will not be a diesel engine on offer. The Go Cross should come with the 1.0-litre petrol engine and this will mean reduction in cost. The Go Cross will have more than sufficient power and torque.

The Datsun Go Cross will compete with the upcoming new Maruti Wagon R 7 Seater. This will be the only and direct competition. The advantage Wagon R has is of its existing brand name. This will mean, Datsun will have to offer something tremendous to match with Maruti Suzuki.

LED lamps on the bumper