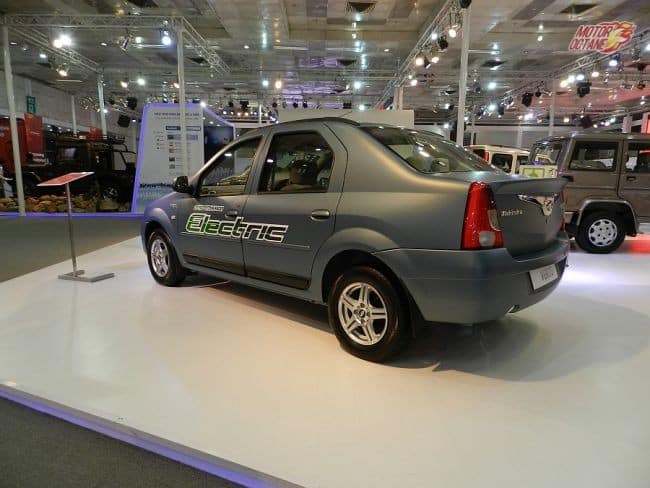 The battle against vehicular emissions is leading to all a diverse offering of solutions from the stakeholders involved. Take domestic auto-major, Mahindra for example. That the Supreme Court ruling preventing the registration of diesel powered vehicles above 2000cc hit Mahindra hard is well-known. But the prolific manufacturer is using this difficult time to tweak its product offerings across the entire commercial and passenger car portfolio. It has declared that they will be launching an electric variant of their Verito sedan and the Maxximo mini-truck sometime early next year.

Mahindra had only days back unveiled their latest engine family called the mFalcon range. Focussing on the small-capacity, sub-2000cc segment, the mFalcon range includes the G80 – a 1.2 litre petrol engine. The manufacturer is looking to introduce petrol engine options across all their popular models in the portfolio. On the other hand, Mahindra, also makes the all-electric, automatic electric-vehicle (EV) – the e2o. A derivative of the powertrain used in this car will be used to power the electric variants of the Verito sedan and Maxximo mini-truck in 2016.

Mahindra has indicated that it will be focussing on the taxi-cab segment for the electric-Verito when launched. The company is already in talks with some of the leading cab-services aggregators and will prove to be a win-win solution for everyone involved. Currently, a fleet of e2o’s factory fitted with GPS-location positioning is already in use by a cab-operator in Bengaluru. The services, on account of the built-in tamper-proof location monitoring and convenience laden, high-speed internet access, have proved to be a hit with many a MNC.

Mahindra is now looking to replicate and scale-up this model across other markets in the city. It is believed that the company is likely to tie-up with Ola Cabs for such an initiative. Similarly, the electric variant of the Maxximo mini-truck could be adopted by logistics firms in key markets. The company is also a partner in the Government’s FAME initiative along with fellow car manufacturers, Maruti Suzuki and Tata Motors. By working towards a level playing ground in terms of the hardware specifications, the program hopes to spur increased adoption of electric vehicles and hybrids into mainstream society.

At the moment, battery-packs are manufactured in China and then imported into the country for electric-vehicle use. Through standardization of key components, like the lithium-ion battery packs, for example; and combined economies of scale, overall costs would reduce. This would, in turn, spur the acceptance and adoption of low-emission vehicles across the country.