The Toyota Yaris is well known as a hatchback internationally. It is one of the most popular products sold by the company. However, in India and some other markets, it is a sedan. Some images emerging on the internet that indicate a facelift on the car. The Yaris sedan in India will borrow styling from this car as well. Find out more details about the Toyota Yaris facelift below. 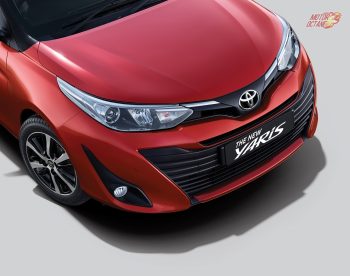 The car will get a new front-end with the headlights swooping back as is seen on the new Toyota models as well. The hatchback is based on the same platform as the sedan version that is sold in India. The fog lamps have also been redesigned. The car overall gets a sharper design with a bigger grille and dynamic lines all along. The majority of the changes to the design will be on the front of the car. The new design looks similar to the Toyota Camry that is sold here. The sedan version of the car was revealed in 2017. After this, the hatchback version got a facelift and got the same design as the sedan. Now with the facelift of the hatchback, the sedan might copy this new design. For now, the pricing and launch details are unknown. The launch will be probably some months after the global unveiling. The pricing should be similar to the current pricing which is Rs 8.76 lakhs (ex-showroom). The Yaris will also be one of the only cars below Rs 15 lakhs which is an original Toyota as other cars will be rebadged Marutis. The Toyota Glanza is an example of this, and the upcoming Urban Cruiser will also join the lineup soon. This model might be introduced next year. It also goes up against rivals such as the Honda City and the Maruti Ciaz and has not been as successful as them. Toyota may introduce a fleet version of its car as well along with a CNG kit. The car also recently got a crossover Yaris in European markets.

In India, the Toyota Yaris is powered by a sole 1.5-litre, 4-cylinder petrol engine that puts out 106 BHP @ 6,000 rpm and 140 Nm of torque @ 4,200 rpm. This engine can be mated to either a six-speed manual or a seven-speed CVT automatic gearbox. The CVT version also has paddle shifters on it. For now, there are no details on any new engines as well.