Kawasaki launched their first BS6 bike which is the Ninja 650. The bike now costs Rs 6,24,000 (ex-showroom), that makes it Rs 35,000 premium than the BS4 model. The price hike still justifies because of the additional new features and changes it comes with. What are those? Let’s find it out and we’ll also see is if it’s worth to buy the BS6 Kawasaki Ninja 650.

There’s not much of a difference in the powertrain and has few minor tweaks to comply with the stricter BS6 norms. It still comes with the same 649 cc parallel-twin, fuel-injected, liquid-cooled motor. The engine pumps out nearly 67 bhp max power and 65.7 Nm of peak torque. The max power and max torque come pretty much at early RPMs when compared to other Kawasaki motorcycles. The engine comes mated with the six-speed gearbox.

The BS6 Kawasaki Ninja 650 retains most of its hardware units from the predecessor. The bike comes with the same trellis frame chassis made of high-tensile steel. The suspension duty is done by the 41 mm USD telescopic forks at the front and an adjustable preload mono-shock at the rear. The braking of the bike is done with the help of 300 mm twin-disc at front and 220 mm disc at the rear. The bike now comes with a new set of tyres of 17-inch wheels, the new tyres are Dunlop Sportmax Roadsport 2.

The BS6 Kawasaki Ninja 650 has changed a lot in terms of design. The bike now gets completely new fairing which looks more aggressive than before. The design language now resembles the Ninja ZX-10R, and the Ninja 400. The headlight units are now LED units and also the windshield is now much more functional. Nevertheless, the design now well suits the modern Kawasaki.

The BS6 Kawasaki Ninja 650 comes with some of the additional features that were missing in the previous bike. It now comes with the 4.3-inch colour TFT display instrument cluster with Bluetooth connectivity which allows you to display navigation, music, etc. The dual-channel ABS is standard, however, its not the switchable one. The bike doesn’t get the new trendy electronic features such as ride modes, cruise control, etc. Rather its basic and pure sports bike without much of a drama.

The bike will be competing against the Honda CBR650R and also the CFMoto 650GT. Both the rivals are yet to come in the BS6 avatar. However, the biggest threat for the bike is expected to be the upcoming Honda CBR500R which will sit in similar price band and performance. Nevertheless, due to the new design and added features, the bike is now more likeable. Therefore, it is still a VFM motorcycle in the segment and worth to buy. 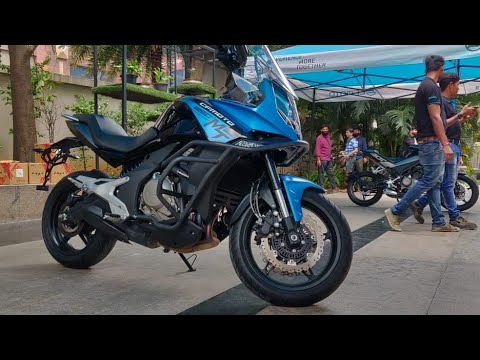