The Tata Nexon has recently had a facelift. The changes were not only visual but were also seen on the insides of the car. Shortly after that, Tata also introduced a turbo petrol engine in the Nexon to compete with the engine of the Hyundai Venue. Now Tata has just added another variant in the Nexon which is called the Nexon XZ+(S) variant. This will be the second most expensive variant and comes below the top of the line XZA+(O) variant. The car gets a lot of features from the top of the line variant and also helps to reduce the gap between both the variants that was a significant one at first. Find out more details about the variant below.

The top of the line variants in the Tata Nexon were the XZ+(O) and the XZA+(O). The latter being the AMT variant. Both of these have the XZ+ and the XZA+ as their lower variant. The new XZ+(S) sits in between these variants. The most important feature of the XZA+(S) is the sunroof. Since this is available at a lesser price than the XZ+(O), the Tata Nexon could get more customers for it. The car will be see in a total of eight variants. 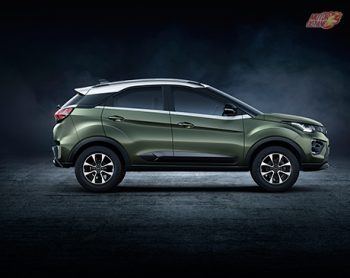 The Nexon XZ+(S) gets a lot of features in addition to the ones already included in the XZ+ variant that are taken from the XZ+(O) variant. These range from leather wrapped steering wheel and gear knob, Tyre Pressure Monitoring System (TPMS), electric sunroof, automatic headlamps, rain sensing wipers and cruise control. Although it misses out on features that are seen on the top of the line variant such as steering mounted controls, voice control, live vehicle diagnostics, valet mode, vehicle live location and geo-fencing and trip analytics. The Tata Nexon XZ+(S) is about Rs 30,000 cheaper than the fully loaded XZ+(O). Although it is about Rs 60,000 more than the XZ+ variant. Therefore the Nexon XZ+(S) costs about Rs 10.10 lakh (ex-showroom) for the standard petrol variant and Rs 10.70 lakh for the AMT variant. The diesel and dual-tone versions are available in both of these which are more expensive. Check out our review of the Tata Nexon facelift below: