Home News Five reasons why the Venue is a best seller The Hyundai Venue has been performing excellent in terms of its sales. In the sales charts for March it can be seen as the sixth most selling car in the country. It has beaten its rivals such as the Tata Nexon and the dominating Maruti Brezza. The Brezza had been doing exceptionally well and was the long standing king until the venue was launched. So why does the Venue beat the Brezza. We look at five reasons below.

It has been launched reasonably later and therefore it gets the new design language of the company. In fact it is one of the first cars to get the new design language in India which features the sleek DRLs along with the main headlamps below them. These are seen on the new Hyundai Creta and will also be seen on the upcoming i20 elite and the Hyundai Tucson as well. This makes it an attractive buying option. 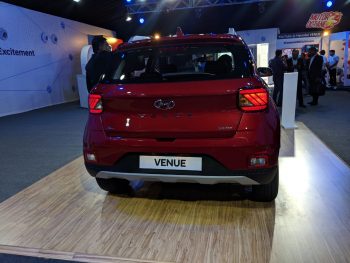 The Venue  is offered with a range of engines. The first one is a naturally aspirated 1.2 litre which produces 82 bhp and 115 Nm of torque. The second is a 1.5 diesel producing 99 bhp and 240 Nm of torque, and the third is for the top of the line 1.0 turbo petrol engine that will be seen on many Hyundai products in different performs. On this car the engine produces 118 bhp which is a very good number for a car of this size.

A good engine needs a good gearbox to work in tandem. While the Maruti Brezza gets an AMT gearbox which is not the best of gearboxes that are seen on cars. The dual clutch gearbox is very good in terms of smooth gear changes as well as getting the best response from the motor. For automatic buyers, the DCT gearbox on the Venue made it an attractive choice as this was not seen on the Nexon as well as the Brezza. Although the DCT gearbox does cost more than the AMT. Even though the Nexon has the most amount of ground clearance, the Venue brought in the most amount of road presence. It can be mistaken for the Creta and from far it does look like a proper SUV instead of sub compact one. Features like the huge grille and a typical SUV boxy design help the Venue to make this happen.

The Indian customers are really attracted towards feature-rich cars. The Seltos has shown us that this is true and the Venue is no different. The main feature on the Venue would be the smart connect technology of Hyundai that allows you to connect to the infotainment system through an app on your phone. This app has features such as geo fencing, lock unlock of cars, climate control and also other important information of the car such as the service records and data.

This segment is expected to get a lot more competition in the future with the Kia Sonet being the earliest one and will be followed by the Volkswagen Taigun and also the Skoda Vision IN that was showcased in the Auto Expo 2020.