The Tata Gravitas is an upcoming SUV offering from the Tata group that will launch this year. It is said to be essentially a seven seater Harrier. The Tata group has been doing in the SUV segment with the Nexon and the Harrier. The Nexon was recently given a facelift and the Harrier as well got a new more powerful diesel engine and an automatic gearbox. The Gravitas does not look similar to the Harrier and gives a Discovery Sport feel to it. Although it will be based on the Omega platform that the Tata Harrier is also based on. Find out more about the car below.

It follows the same design language as the Harrier getting sleek DRLs on the front that also double as indicators. It gets chrome elements on the grille as well along with chrome around the headlights. From the side, it gets larger 18 inch wheels and a different wheel design. You get a chrome strip below the windows as well as chrome on the door handles. From the rear, it looks similar look to the Harrier albeit some minor change in the bumper as well as the light that make the car look a bit different. The rear integrated spoiler also has grown in size. Like the Harrier, it gets premium interiors with an 8.8 inch infotainment system that has Android Auto and Apple Carplay, AC vents and a usb slot for the third row. The driver seat is electrically adjustable. The Gravitas also gets a beige colour option inside. The third row also gets a lot of leg rom and therefore will be comfortable for long rides. It also gets ambient lighting and a nine speaker JBL system. On the second row you get a recline as well as push pull function. 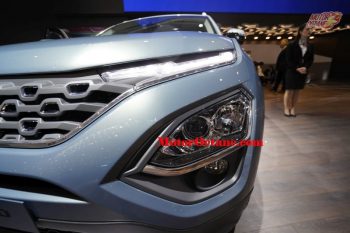 Under the hood you get a BS6 2.0 litre diesel option that produces 170 bhp and 350nm of torque that can be mated to a six-speed manual as well as a six-speed automatic which will make it a powerful car even for the highways. This engine was recently introduced on the Tata Harrier as well. Sadly, the car does not get four wheel drive.

When it is launched later this year it will rival the likes of the Mahindra XUV 500 and the upcoming MG Hector plus. Check out our walk around of the car: