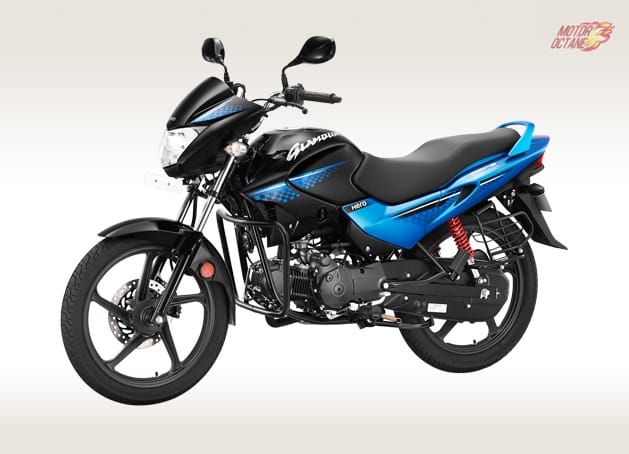 Hero Glamour BS6 will be the updated model of the bestselling 125 cc commuter motorcycle from Hero MotorCorp. The bike has been seen while being tested. It was a camouflaged test bike which was spotted in Jaipur. The bike is almost ready for production. This bike is the most underrated bike in the Hero’s lineup.

The current Hero Glamour is available in 3 variants. The standard variant is carburated whereas the bike also available in a fuel-injected variant. There is also a topmost variant which has better graphics along with the fuel injection system. All the 3 variants are in the dual-tone colour scheme. The most popular among them is the red and black colour scheme. Even the carburated system bike also gets an AMI – Advanced Microprocessor Ignition System. They also get a kick starter as well as an electric start function. Now for the BS6 version of the bike we see that the engine will get a subtle update to the design. This will give the bike a fresh look. The design has been the same for a long time it is in a dire need of an update. It won’t be a complete facelift but it will be just more than graphics change. The instrument console on the Hero Glamour BS6 will change. It might get a complete digital unit. In terms of physical design, the bike will also get a newly redesigned tail section. This will include a new grab rail and LED tail light. The engine of the vehicle is already fuel injected. To get it compliant with the BS6 norms it will have to meet with a slightly different state of tune. The engine might drop some power but this could have been countered with a bigger engine. There is no news from the company whether they will be using a new engine. The exsisting engine of the vehicle is a 124.7 cc. It makes a power of 11bhp and 11Nm of torque. We expect the company to discontinue the carburated version of the bike after BS6 norms come into effect. The bikes technical system remains on the current bike. This includes the integrated braking system and the i3s system The braking setup will also remain the same with drum brakes at the rear and the front will get a disk brake. The suspension setup of the vehicle will have a telescopic suspension at the front and twin shocks at the rear. The test bike is not seen with a tyre hugger on the rear tyre and so this raises some doubts about it to feature on the final production bike. The current pricing of the BS4 model of the Hero Glamour is at Rs 69,950. This will see a price hike of Rs 5,000 – Rs 6,000. The Hero Glamour BS6 will now be priced above Rs 70,000. All this looks like it will go in a higher segment than the current but with BS6 every vehicle segment is about to get expensive and this change will keep the competition same.