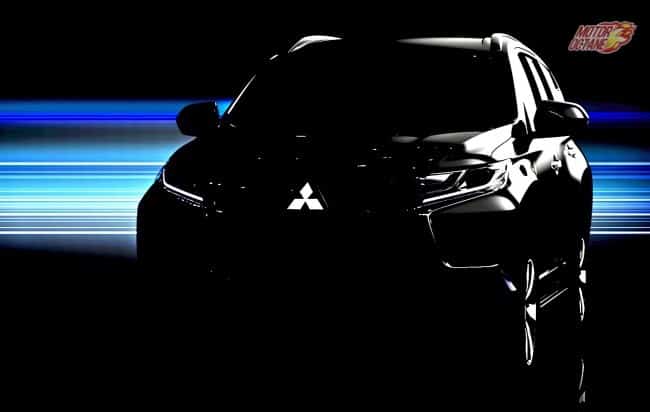 All-new 2016 Mitsubishi Pajero Sport would have its global debut on August 1, 2015 in Thailand, as officially announced by the company. The Japanese automaker has also released a teaser image of the new SUV. New Mitsubishi Pajero Sport’s India launch would take place by the end of 2016, while it would rival the next-generation Toyota Fortuner, new Endeavour, Isuzu MU-7 and Chevrolet Trailblazer.

Talking about the 2016 Mitsubishi Pajero Sport, it would be based on same platform as the company’s Triton pick-up tuck. The SUV would flaunt ‘Dynamic Shield’ design philosophy at the front fascia. The same design language can be seen on the 2016 Outlander facelift. At the front fascia, the new Pajero Sport SUV would have lean headlamps and X-shaped front grille. Just so you know, this X-shaped front grille was firstly seen on the GR-HEV concept at the 2013 Geneva Motor Show. Also, the SUV would have an all-new interior cabin with more equipments. One of the major highlights of the new Pajero Sport is going to be Apple’s CarPlay and Google’s Android Auto smartphone integration.

2016 Mitsubishi Pajero Sport is expected to be powered by a new 2.4-litre four-cylinder MIVEC diesel engine, which would replace the current 2.5-litre DI-D diesel engine. The new engine would churn out 179bhp of power as compared to the current engine’s 176bhp. Hindustan Motor Financial Corporation Ltd. (HMFCL) is responsible for the sales and after-sales of Mitsubishi vehicles in India. Recently, at the inauguration of company’s new dealership in Gurgaon, Sunil Kumar Singh, Vice-president (sales & marketing) confirmed that new Pajero Sport won’t be able to launch before mid 2016. Currently, Pajero Sport comes with a “Super Select 4WD” with five-speed automatic transmission and paddle shifters in India.