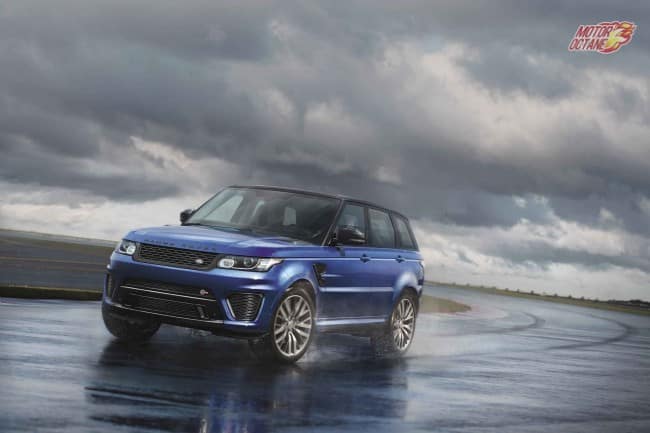 In our previous feature story, we told you about the premium SUVs heading our way this year and the next. And, now carrying the legacy forward we will talk about a few performance-oriented SUVs that are expected to hit the Indian shores; though the exact timeline of their arrival is not confirmed yet. Just imagine, a well-designed luxurious SUV packed with firepower of 400 horses or even more; the mere thought gives goosebumps – at least to us. Several luxury automakers including ‘The Big Three’ Germans are mulling to launch their high-performance versions of their SUVs in India. Coming to the party, is also the British luxury marquee Jaguar Land Rover with its first SVR badged product in the country. Lets talk about in detail about these SUVs and feel the high adrenaline pumping action.

1. Range Rover Sport SVR: Claimed to be the fastest Land Rover ever made, it saw its global première last year at the Pebble Beach Row in August. Just a fortnight back, it was reported to be in India for Research & Development purposes. Now, the rumour-mills are abuzz that the British luxury automaker is going to launch it in the country, which would also mark the introduction of its Special Vehicle Racing (SVR) brand. Just so you know, Range Rover Sport SVR gets a 5.0-litre V8 supercharged petrol motor with a maximum power of 545bhp and peak torque of 680Nm. Its blistering acceleration can be calculated from the very fact that it reaches 100kmph from standstill in just 4.7 seconds, while topping out at 260 km/hr. Furthermore, a water wading capability of upto 850mm makes it even more desirable. Expect at least INR 2.5 crores price tag (on-road), when it is officially launched in August 2015.

2. Mercedes-Benz GLE AMG S: Mercedes-Benz unveiled the M-Class successor GLE-Class in March 2015 and as expected, a high-performance AMG version was also unleashed simultaneously. Reportedly, both the standard GLE-Class and AMG variant would be launched in India next year in 2016. Talking about the Mercedes-Benz GLE AMG S, it would be carrying a 5.5-litre, twin-tubro V8 motor. This immensely powerful engine would deliver a massive power output of 577bhp and peak torque of 700Nm. It would do a 0-100kmph sprint in a mere 4.2 seconds, while clocking an electronically limited top speed of 250 km/hr. It also gets visual updates over the standard model, as every AMG gets, in form of AMG body-kit, larger AMG wheels, a new steering and new AMG embossed leather upholstery. No prizes for guessing the price as it, too, quite like its competitors is going to cost in excess of INR 1.8 crores (on-road).

3. BMW X5 M & BMW X6 M: When it comes to raw power and bolstering acceleration, BMW also doesn’t want to miss out the competition. The German luxury automaker has confirmed the launch of all-new X5 M and X6 M in India in 2015. The aforesaid high-performance duo was unveiled at the 2014 Los Angeles Motor Show in November and grabbed several eyeballs. Being powered by company’s 4.4-litre V8 Bi-Turbo petrol engine, which also does duties to the M5 sedan and M6 coupe, they have a maximum power of 564bhp and peak torque of 750Nm. These extremely belligerent SUVs cross the 100kmph barrier in just 4.2 seconds, while touching a top speed of 250 km/hr. However, one can further enhance the top speed to 280 km/hr. The engine would be linked to an eight-speed automatic transmission, which would transmit power evenly to all the four wheels. Being 30 kgs. lighter than their predecessors, both the BMW X5 M and BMW X6 M would come to India this year an cost in excess of INR 1.9 crore (On-Road). 4. Audi SQ7: Would you belive it if we say that new-generation Audi SQ7 is already in India for testing purposes, nah I reckon. But it is actaully. Most of you peeps would argue that Audi hasn’t even launched the new Q7 in the country and it is already working on SQ7. Seems quite intriguing to us as well – to say the least. Well, first things first, the SQ7 is a high-performance version of Audi’s flagship SUV Q7 and it is powered by a 4.0-litre V8 diesel engine which churns out around 450bhp of raw power and 800Nm of peak torque. Being based on Volkswagen Group’s versatile second-generation MLB modular-longitudinal platform, it is expected to be officially unveiled at the 2015 Frankfurt Motor Show in September with deliveries starting in early 2016. The Indian auto aficionados might have to wait a tad longer as it would not be launched in the country until 2017. Expect it to be as costly as its other counterparts, i.e. around INR 1.75 crore (on-road).